SAN FRANCISCO — Jordan Poole shined in his playoff debut with 30 points, staying in the starting lineup as Stephen Curry returned from a foot injury, and the Golden State Warriors smothered Nikola Jokic to beat the Denver Nuggets, 123-107, on Saturday night (Sunday, Manila time) in Game One of the first-round series.

Healthy at last, Klay Thompson returned to the playoff stage for the first time in nearly three years and scored 19 points with five 3-pointers, and the perimeter combination of Curry, Poole and Thompson was too much for the Nuggets.

Jokic had 25 points and 10 rebounds for Denver, facing stifling defense in the paint from Draymond Green and Kevon Looney while shooting 12 for 25.

Curry came off the bench to contribute 16 points in 21 minutes after missing exactly a month with a sprained ligament in his left foot. The two-time MVP tested it in a scrimmage Thursday, came off the bench and had a minutes restriction. He checked in at the 5:58 mark of the first quarter to a rousing ovation.

Curry missed his first five shots before a layup that went in on a goaltending call against Aaron Gordon 1:14 before halftime, then knocked down a 3 from the top of the arc as the Warriors took a 58-47 lead at the break.

Jokic averaged 28 points, 15.8 rebounds and 8.8 assists in the four matchups with the Warriors, three won by the Nuggets but only one by double digits. But Green hadn't faced Denver this season, so his addition was huge.

Green hit a 3 from the top over Jokic with 1:47 left in the third, then the Nuggets star committed a turnover moments later as Gary Payton II capitalized with a basket that put Golden State up 89-68.

Green wound up with 12 points, nine assists, six rebounds and three blocked shots for a Warriors team that lost last year in the play-in game to Memphis and is back in the playoffs for the first time since losing the 2019 NBA Finals in six games to Toronto.

That was Thompson's last playoff game, when he suffered a torn ACL in his left knee that required surgery before he tore his right Achilles tendon in November 2020 and had that repaired — costing him more than 2 1/2 years until he came back in January.

Aaron Gordon and Thompson were hit with double technicals at the 6:25 mark of the second. 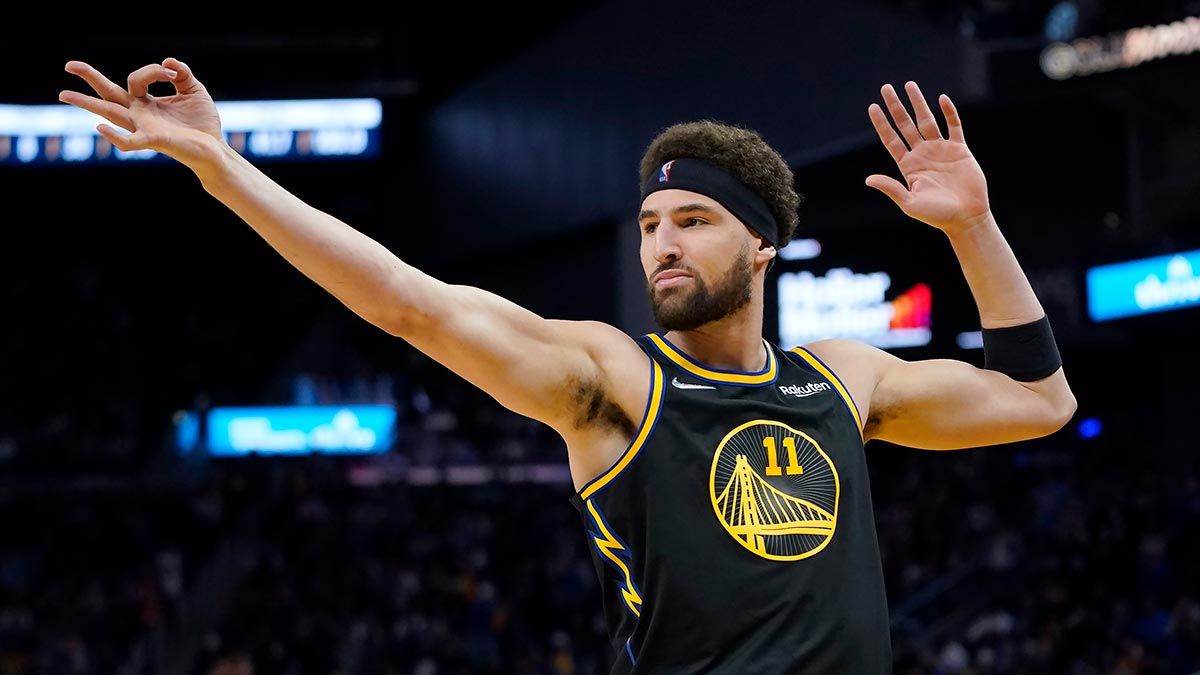 Curry, Green, Andre Iguodala and Thompson played their first game together all season, given the Warriors' four playoff-tested veterans dealt with injuries and lengthy absences. Curry, Green and Thompson helped Golden State beat Denver 4-2 in the first round of the 2013 playoffs when Iguodala played for the Nuggets.

The experienced players were reunited for the first playoff game in San Francisco in 58 years, since April 1, 1958, against the St. Louis Hawks.

Poole warmed up in a T-shirt reading "Poole Party" then dazzled on the big postseason stage, shooting 9 for 13 with five 3s while starting in Curry's place. He joined Wilt Chamberlain and Mitch Richmond as the only players in franchise history with 30 points in a postseason debut.

With 2:54 before halftime, Poole cut one way then the other through the key for a layup and got fouled by Will Barton and converted the three-point play. Poole hollered in celebration as Curry stared him down in delight.

Poole made his first six shots and had 17 points by intermission.

Nuggets: DeMarcus Cousins was ejected with 10:28 left in the game after back-to-back technicals. He had seven points and two rebounds against his former team. ... Denver shot 11 for 35 from deep, Jokic missing his four 3-point tries. ... Gordon missed his first two shots and wound up 3 for 10 with eight points.

Warriors: Thompson passed Rasheed Wallace (2,384) for 44th place on the all-time playoffs scoring list. ... Andrew Wiggins had 16 points and nine rebounds in his first and only playoffs with Minnesota in 2018. ... Looney, who played all 82 regular-season games, grabbed seven boards. ... Golden State shot 64.7% in the first quarter and trailed 27-26. ... The Warriors went 6-6 down the stretch without Curry, winning their final five regular-season games.