SAN FRANCISCO — Back in the starting lineup for a night, Jordan Poole scored a season-best 36 points on the debut of his first bobblehead and led the Golden State Warriors past the San Antonio Spurs, 132-95, on Monday (Tuesday, Manila time).

A performance fitting of a Poole Party, indeed: He shot 13 for 20 and knocked down five 3-pointers. With 10:36 left in the game, Poole hit a 3 under pressure and the ball bounced high against the backboard and fell through and he converted a free throw for the four-point play.

Poole received a warm ovation when he left for good at the 8:04 mark of the fourth quarter following his 13th career game with 30 or more points.

Stephen Curry added 16 points, five rebounds and five assists playing 27 minutes and Andrew Wiggins scored 10 for the Warriors in the second game of a back-to-back after they lost 122-115 at Sacramento on Sunday to fall to 0-7 on the road.

Golden State grabbed an early lead and ran away from the Spurs for a 61-45 advantage at the break. That allowed coach Steve Kerr to use his reserves in long, extended stretches. Anthony Lamb scored 17 points and Jonathan Kuminga contributed 15 off the bench.

Keldon Johnson scored 15 points for injury-plagued San Antonio, warming up in the second half. The Spurs snapped a five-game losing streak by beating the Bucks 111-93 on Friday night. 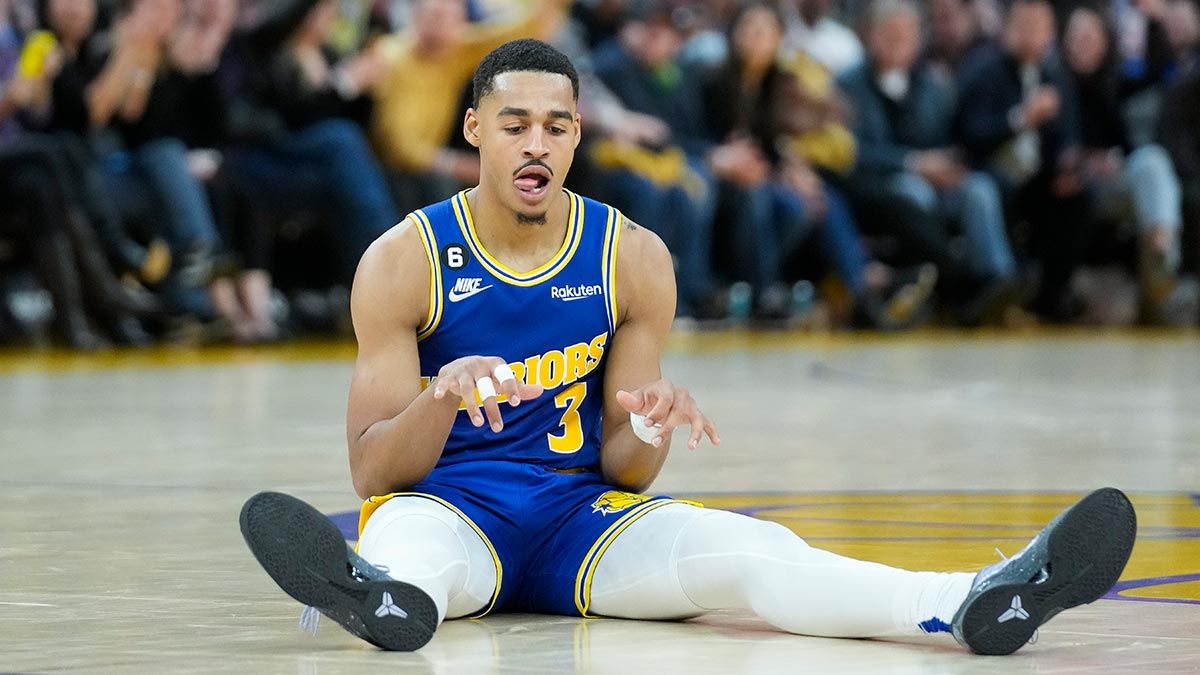 The Hall of Fame trio of Tim Hardaway, Chris Mullin and Mitch Richmond served as the broadcast team for the "Run TMC Takeover."

"It was very special. When I was here as an assistant I got to enjoy Timmy and Mully, Mitch was gone," Spurs coach Gregg Popovich said. "It was cool, it was fast paced, it was creative, the people really bought into it, it was a wonderful time in the NBA. These guys were one of the best shows available for sure."

The Warriors haven't begun 0-7 on the road since this group lost its initial nine away games in 1989-90.

On the broadcast, Hardaway made a reference to rape while describing a defensive play by Draymond Green, and later apologized for his poor choice of words.

Poole started in place of Klay Thompson and was thrilled with his first career bobblehead doll.

"I love it, it's absolutely amazing. It's my first one," Poole said. "It's really a special accomplishment. It's an honor. I'm glad it came out the way it did."

Spurs: G Tre Jones missed the game with a stomach illness. Jeremy Sochan moved into the starting lineup. ... Johnson has made a 3-pointer in 30 straight games, the second-longest streak in franchise history behind Danny Green's 32 straight in 2012. ... The Spurs had won the previous two on Golden State's home floor.

Warriors: Curry was named Western Conference Player of the Week for the 19th time. He became the oldest player with back-to-back 40-point performances since Michael Jordan in 2002. ... Thompson rested as he typically does during one of the back-to-back games as the Warriors use caution given his right Achilles tendon surgery that kept him out until January.

Spurs: At Portland on Tuesday night to complete a back-to-back having won the last four matchups with the Trail Blazers and two in a row in Portland.

Warriors: At Phoenix on Wednesday night having lost the last two meetings vs. the Suns and four of five on the road.