San Antonio outscored New Orleans, 29-15, in the final quarter while shooting 60 percent from the field in the fourth.

"Coach (Gregg Popovich) preaches .5 basketball, just quick decisions," Spurs forward Doug McDermott said. "Don't hold it for too long. If you have a shot, shoot it. If not, move it, cut and just continue to move. I thought the fourth quarter especially we were playing unselfish. Seemed like we got everything we wanted just because we were moving the ball."

The Spurs' backcourt combined to shoot 14 for 30 and combined to commit just three turnovers while playing 34 minutes each.

"(White is) kind of ridiculous right now," Popovich said. "Man, oh man, when he and DJ (Murray) and Jakob play like that, you have an opportunity to win basketball games. They were just relentless defensively and on the boards.

"Those three led the way and everyone else joined in. It was a great team effort."

Brandon Ingram had 27 points to lead New Orleans, while Jonas Valanciunas added 17 points and 12 rebounds. The Pelicans have lost four of six as they try to rebound from a nine-game skid during the first few weeks of the season.

San Antonio regrouped after being drubbed 127-111 by Denver on Saturday, especially during a 7-0 run in the fourth quarter that put the Spurs up 90-82. San Antonio would extend its lead to 101-89 with 6 minutes remaining on McDermott's 16-foot jumper.

The Spurs lead the Western Conference with an average of 53.8 points in the paint and they returned to that comfort zone with 66 points — 14 more than New Orleans.

"They knocked us on our heels," Pelicans coach Willie Green said. "Lot of drive kicks, drive kicks. This is what they do. They get in the paint, they play together, they had 31 assists."

After closing within a point on numerous occasions, New Orleans took its first lead at 50-49 with 1:03 remaining in the first half on Ingram's 11-footer. The Pelicans' largest lead was two points.

Poeltl had a huge impact on quelling those rallies, grabbing seven offensive rebounds and keeping New Orleans from taking others with tips or blocking out on both ends.

"He's one of the best at it," Green said. "Maybe the best in the league at offensive rebounding. Has great timing, shot goes up, he's a quick leaper. We talked to the guys about being able to withstand his ability to offensive rebound but he had a really good night." 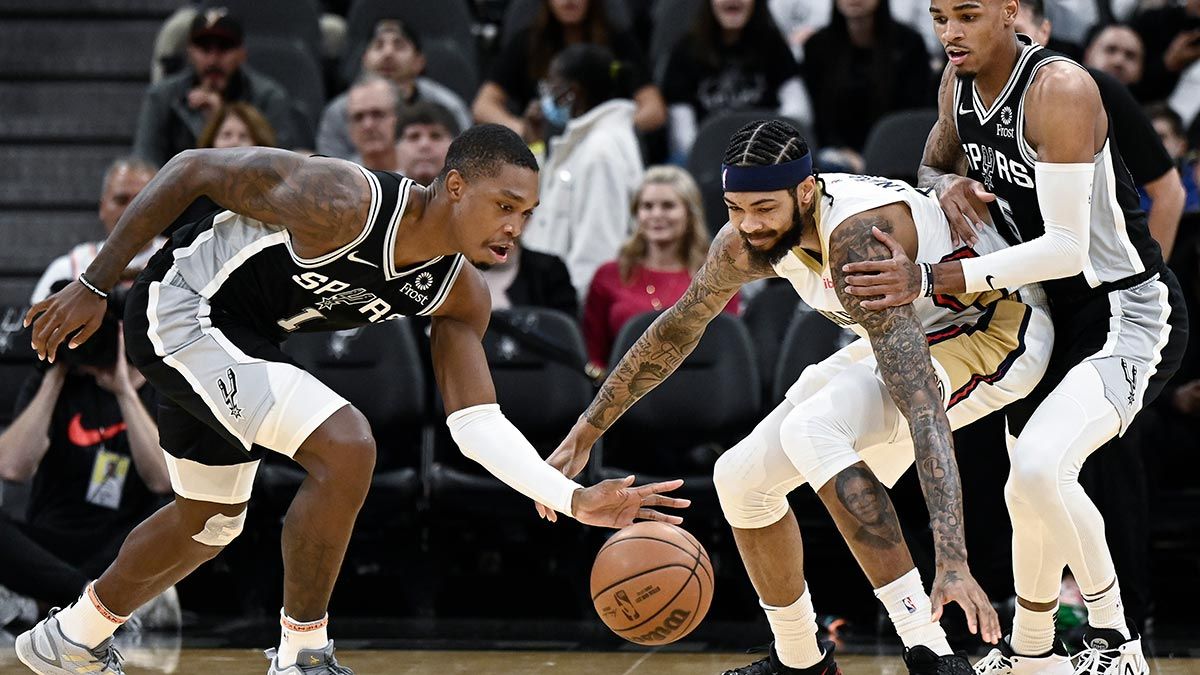 Dejounte Murray posts his fourth triple-double of the season.

McDermott has built a reputation as one of the league's better 3-point shooters, but he had two wraparound layups in the first half that helped the Spurs build momentum.

McDermott had 13 points, shooting 6 for 11 from the field and 1 for 4 on 3-pointers. His driving layups came off of backdoor cuts that led to bounce passes from Poeltl and Tre Jones.

"I feel like I'm more than just a spot-up shooter, so I like to try and get to the rim once in a while and keep the defense honest," McDermott said. "Obviously, I want to try to get the 3 up if I can, but if they're overplaying me like that, I like to back cut. I trust my ability to finish at the rim."

Pelicans: Star forward Zion Williamson suffered a setback in his rehabilitation from offseason surgery to repair a fracture in his right foot. The team didn't give a timeline. … New Orleans is 6-13 against Western Conference opponents. … The Pelicans' last victory in San Antonio was Feb. 28, 2018.

Spurs: San Antonio was 0-3 against Southwest Division teams prior to beating New Orleans. … Johnson's 3-pointer with 3:04 remaining in the first quarter gave the Spurs 80,000 points at the AT&T Center. San Antonio has limited opponents to under 73,700 points since moving to the AT&T Center in 2002. … Johnson has made 3-plus 3-pointers four times in 25 games this season, surpassing his total in the previous two seasons. … Murray entered Sunday with 93 deflections, sharing the league lead with Toronto's Fred VanVleet. Fellow Raptor Gary Trent Jr. was third with 91 deflections.

Pelicans: At Oklahoma City on Wednesday.