PHILADELPHIA — Joel Embiid was popped in the mouth by an elbow that drew blood, rattled teeth, and stunned the Sixers' big man.

Embiid shook off the knock after a short stint on the bench, then Philadelphia took off and won the first round in a bruising matchup between two teams expected to fight for the top spot in the Eastern Conference.

The season opener had a May feel from the opening tip. Boston and Philly roughed up each other, combining for more than 60 fouls. They each showed off their prized free agent acquisitions.

But it was the Sixers who turned in a dominant fourth quarter.

"It felt like a playoff atmosphere, already," Philadelphia guard Josh Richardson said. "It was ready to pop from the jump." 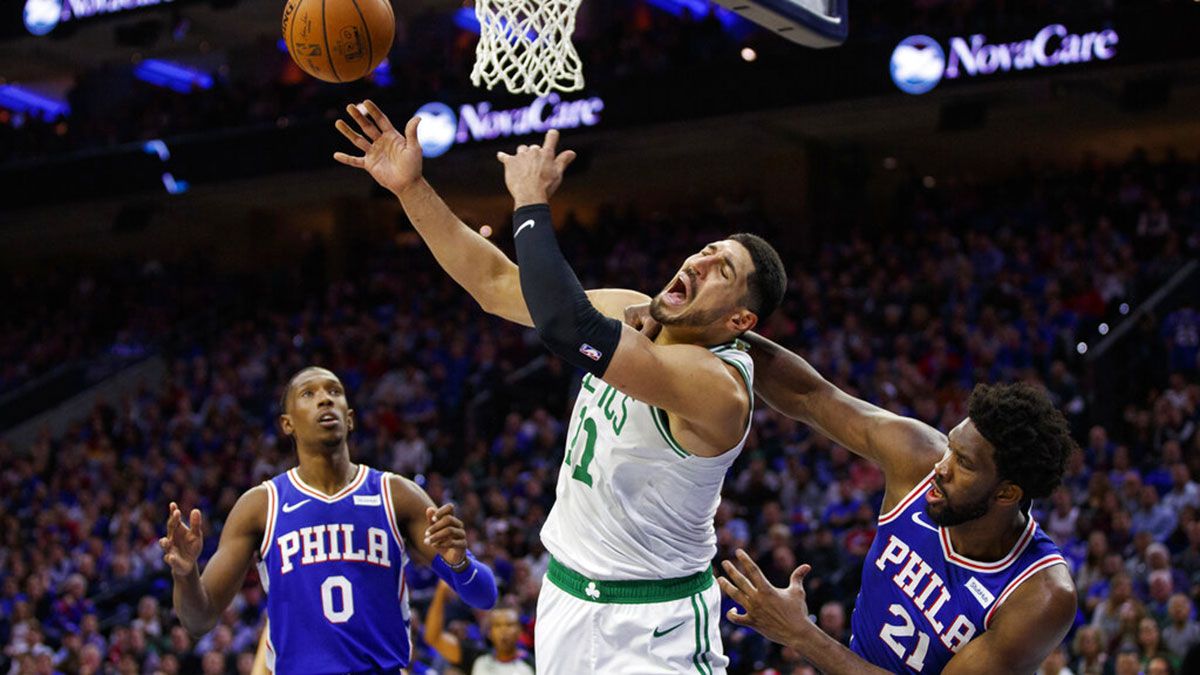 Philly's superstars can only do so much, and the other Sixers were clutch in the fourth when they needed them.

Furkan Korkmaz and Tobias Harris buried consecutive 3-pointers — after the Sixers had missed 21 of 24 through three quarters — to stretch the lead to 10.

Even without that scrutinized jumper in play, Simmons was smooth and sensational as he attacked the hoop for easy baskets. He used a nifty spin move in the paint to hit Kyle O'Quinn for a basket that made it 90-74. The packed house went wild as the backups, a weak spot in the postseason, put the Sixers on the decisive run. Simmons also had nine assists and eight rebounds, though he played his 161st career game without a 3.

"I'm skilled, I'm gifted, I'm pretty good at what I do," Simmons said.

Gordon Hayward led the Celtics with 25 points. Jayson Tatum had 21.

Kemba Walker scored 12 points on 4-of-18 shooting in his Boston debut, and Al Horford had 16 points in his first game with the 76ers.

Horford spent the last three seasons with the Celtics and was one of the few defenders that gave Embiid fits. Horford signed a four-year deal to come to Philly and quickly became a popular teammate. Walker was signed to a four-year, $141 million deal, the most Boston could offer, but $80 million less than the Charlotte Hornets could have paid him over five seasons.

"Tough night for many of us," Walker said. "I wish I could have played a lot better for these guys."

About the only sign of a rough patch for Philly came when Embiid was drilled by Jaylen Brown's elbow early in the third. Embiid pressed a towel to this face after the hit and did not talk to the media because of swelling.

Brown was whistled for his fifth foul, and Embiid sat out for a couple of minutes. He hardly seemed bothered by his mouth the rest of the game — he slid across the court as he tried to save the ball from going out of bounds, drawing a loud "Let's go Sixers!" chant.

76ers: Allen Iverson was in the house wearing a No. 23 Trey Burke jersey. ... Rapper Biz Markie was at the game. ... The bell trolls for thee? Horford rang the ceremonial Liberty Bell.

Walker had a rough night from the floor, Tatum scuffled through 8-of-22 shooting and the Celtics shot only 37 percent overall.

"All that means with Kemba and Tatum, there are a lot of good nights coming," Celtics coach Brad Stevens said.

Embiid said at the start of training camp that he lost 20 pounds over the offseason and aimed for at least five more before opening night. Coach Brett Brown said he didn't know if the two-time All-Star center had reached his weight goal. Brown said Embiid's health is the "best he's ever been," but there's work ahead.

"Is he an A-plus right now," Brown asked. "No, he is not. But he is trending in the way that we want. And nobody asked him to be that on opening night."

The 25-year-old Embiid has never played in more than 64 games a season and has vowed to top that total in 2019-2020. The Sixers care more about having their franchise player healthy for the postseason than reaching some arbitrary number.

"I feel when I look at him, I think he looks healthy," Brown said. "He looks like he's ready to have a great season."