PHILADELPHIA — Joel Embiid had 39 points and 16 rebounds, Alec Burks and Shake Milton added big baskets in overtime and the Philadelphia 76ers extended their dominance at home with a 112-104 victory over the Brooklyn Nets on Thursday night (Friday, Manila time).

Playing without All-Star point guard Ben Simmons because of lower back tightness, Philadelphia improved its record at the Wells Fargo Center to 26-2 on the season. The 76ers are 9-19 on the road.

Tobias Harris added 22 points and 12 boards for the 76ers. Burks added 19 points, including a pair of layups in overtime that gave Philadelphia the lead for good.

Caris LeVert scored 25 points and Spencer Dinwiddie had 22 for Brooklyn, which announced before the game that Kyrie Irving would have season-ending surgery on his right shoulder.

It was a night of extended runs that started with Philadelphia breaking out of the gate to a 22-6 lead, only for the Nets to follow with a 44-8 stretch that helped them to a 52-42 halftime lead.

Embiid would start to assert more of a presence early in the second half, controlling the game from the paint and helping the Sixers get back within 78-77.

Dinwiddie hit a fadeaway jumper with 30 seconds left in regulation to give Brooklyn a 103-101 lead, then fouled Embiid at the other end with 16.2 to play. Embiid hit both foul shots to even the score and Brooklyn played for the last shot, but Wilson Chandler's layup at the rim after a pass from Dinwiddie was knocked away by Embiid just as the horn sounded to send the game to overtime. 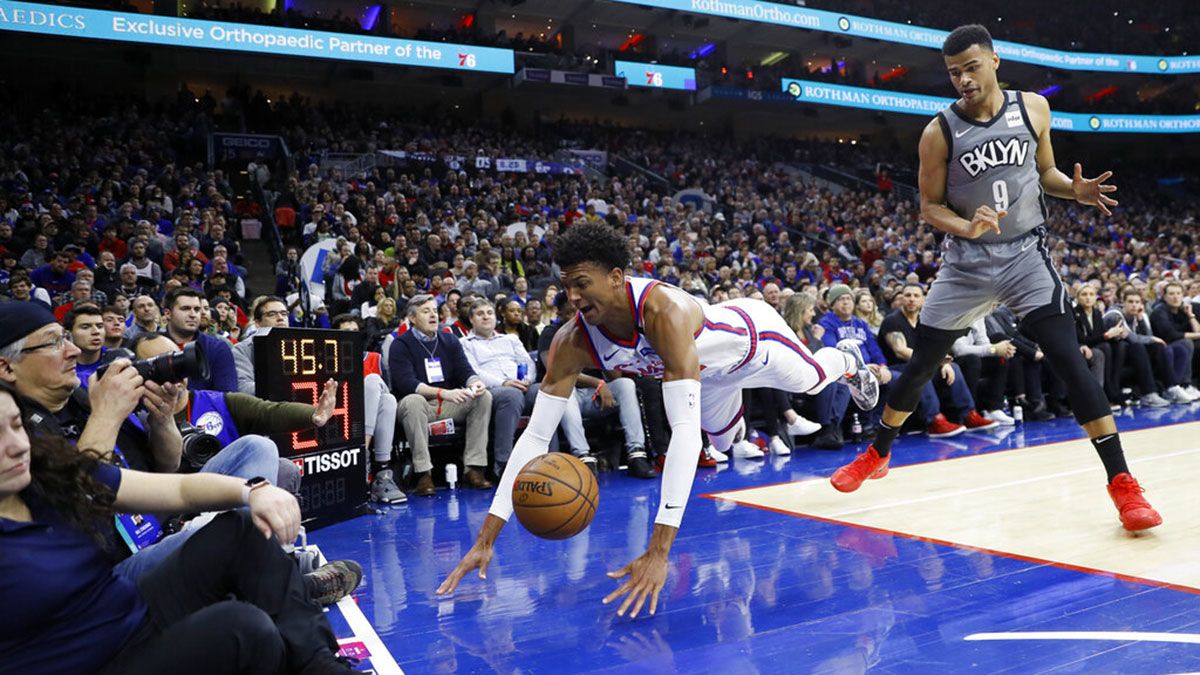 Matisse Thybulle dives for the loose ball past Timothe Luwawu-Cabarrot.

After Dinwiddie hit one of two free throws to give Brooklyn a 104-103 lead, the 76ers went on a 9-0 run with Burks hitting two running layups and Milton converting a pass from Harris in the lane into an easy basket.

Sixers: Simmons played in Sunday night's All-Star Game in a reserve role for LeBron James' squad. Simmons is officially listed as day-to-day. In his place, Raul Neto started at the point guard spot. It is the third game this season that Simmons has missed. He injured the AC joint in his shoulder in November and missed two games.

Nets: With the loss of Irving, the Nets will have to make a run to the playoffs with a starting lineup of Joe Harris, Taurean Prince, Jarrett Allen, LeVert and Dinwiddie. "I think our players have done a great job with that," Nets coach Kenny Atkinson said before the game. "I don't think they feel anything like that at all. They look at is as a challenge and an opportunity to do something special. I've been so pleased with the spirit and attitude. The spirit is really good in there and I think these guys want to surprise some people."

Sixers: Head to Milwaukee for a game on Saturday night.