Jonas Valanciunas had 17 points and 12 rebounds for the ninth-place Pelicans, who won for the sixth time in eight games while dealing the second major blow in five days to the Lakers' hopes of squeaking into the play-in tournament.

New Orleans beat Los Angeles 116-108 at home last weekend after rallying from a 23-point deficit, and the Pelicans swept the season series with this comeback on the road.

LeBron James missed a 3-pointer at the buzzer and scored just two of his 38 points in the fourth quarter for the Lakers (31-46), who have lost five straight and 15 of 19 to fall one game behind 10th-place San Antonio (32-45), which holds the tiebreaker.

Davis had 23 points, 12 rebounds and six assists in his return from a six-week injury absence since Feb. 16, but the eight-time All-Star's presence wasn't enough to beat his former team. The Lakers now face long odds just to get past the Spurs for a one-game shot at the Pelicans, since four of LA's final five games are against playoff-bound opponents.

New Orleans trailed for most of the fourth quarter, but Valanciunas hit a tying 3-pointer with 2:52 to play. After Davis missed a floater, Ingram put the Pelicans ahead 110-108 on a fadeaway jumper.

Davis missed the previous 18 games with a sprained foot during his second lengthy injury absence of the year. Davis had been hurt for 39 games and healthy for 37 this season, his second straight with major injury problems.

Los Angeles went 4-14 in Davis' most recent absence, their disappointing season turning into a potentially humiliating one. James also missed three of the previous four games with a swollen ankle, but he elected to play through the pain Friday with Davis' return.

That meant Davis, James and Russell Westbrook played together for only the 21st time in the Lakers' 77 games this season — and just the sixth time since Dec. 17. Injuries have been the leading — but hardly the only — factor in Los Angeles' descent from a likely championship contender to a borderline playoff team.

Although these teams are a combined 24 games below .500, the game had a playoff feel from the opening minutes when Jaxson Hayes delivered a hard foul to stop James on a fast break. Davis ran the length of the court to exchange words with Hayes over the flagrant foul.

James scored 21 points in the third quarter, but Ingram answered with 15 in the period, and the Lakers only led 87-86 heading to the fourth. 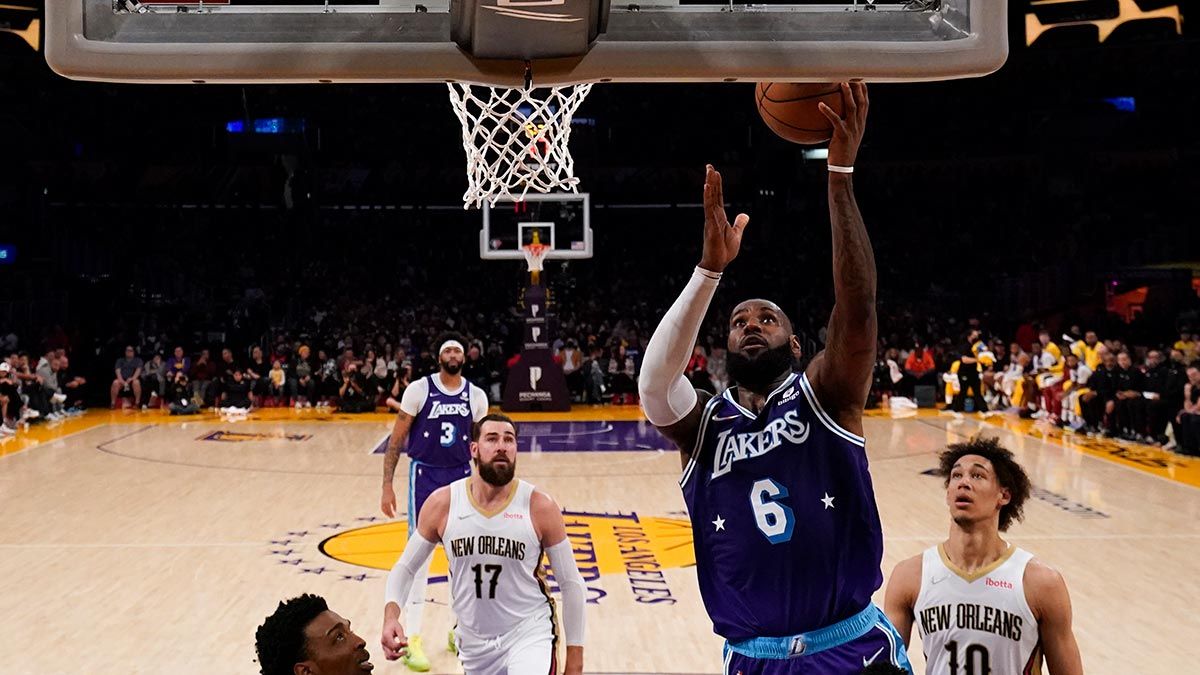 Pelicans: Hayes dunked with 36 seconds left in the first half, but the points were taken off the board following video review after the halftime buzzer because Hayes didn't beat the shot clock. ... Four starters played at least 36 minutes.

Lakers: Davis crossed the court to say something to a fan in the second row early in the fourth quarter after New Orleans called a timeout when LA took a six-point lead. The fan, who wore a Kobe jersey, was escorted away from his seat by security. ... Carmelo Anthony was unavailable due to a non-COVID illness.

James got into the spirit of the holiday Thursday morning with a straight-faced tweet: "I'm out for the season officially. See y'all in the fall."

James and the Lakers didn't acknowledge the joke, but at least James apparently warned Frank Vogel when he sent out the tweet. The coach declined to say whether he thought it was funny.

Pelicans: At Clippers on Sunday.