MIAMI — Pat Riley is always looking around for ways to make the Miami Heat better. This offseason has him wondering if that improvement might come from within.

The Heat president said Friday that the top offseason priority of the Eastern Conference champions “is to take care of the players that we have” such as free-agent-to-be Goran Dragic, all while maintaining salary cap flexibility to add an impact player in a 2021 offseason that could see many stars on the move.

“We have a good idea of what we want to do,” Riley said in his annual end-of-season media availability.

No plan can be considered completely firm yet; the NBA’s board of governors were meeting Friday (Saturday, Manila time), simultaneous to Riley speaking, to discuss ideas about when it might be feasible to start next season -- with Dec. 22 as the initial target for a season of about 72 games. And the financial details for next season remain unclear as well, such as the salary cap and luxury tax numbers. All that will have an obvious impact on every team’s plans, Miami’s included.

But Miami is already clear on some matters: The Heat has no intention on letting extension-eligible All-Star center Bam Adebayo leave (though it remains unclear when his extension will get done). Riley added that the notion of bringing back this past season’s team as close to intact as possible has crossed his mind. Kelly Olynyk has a player option for about $12 million, while Meyers Leonard, Jae Crowder, Solomon Hill and Derrick Jones Jr. are among Miami’s free agents.

“We know what our priorities are,” Riley said. “It is to take care of the players that we have, that we have to make decisions on almost immediately. We know Bam has a decision to make and we do with him. We know the guys that have sacrificed for us that we really like, our free agents, especially Goran.” 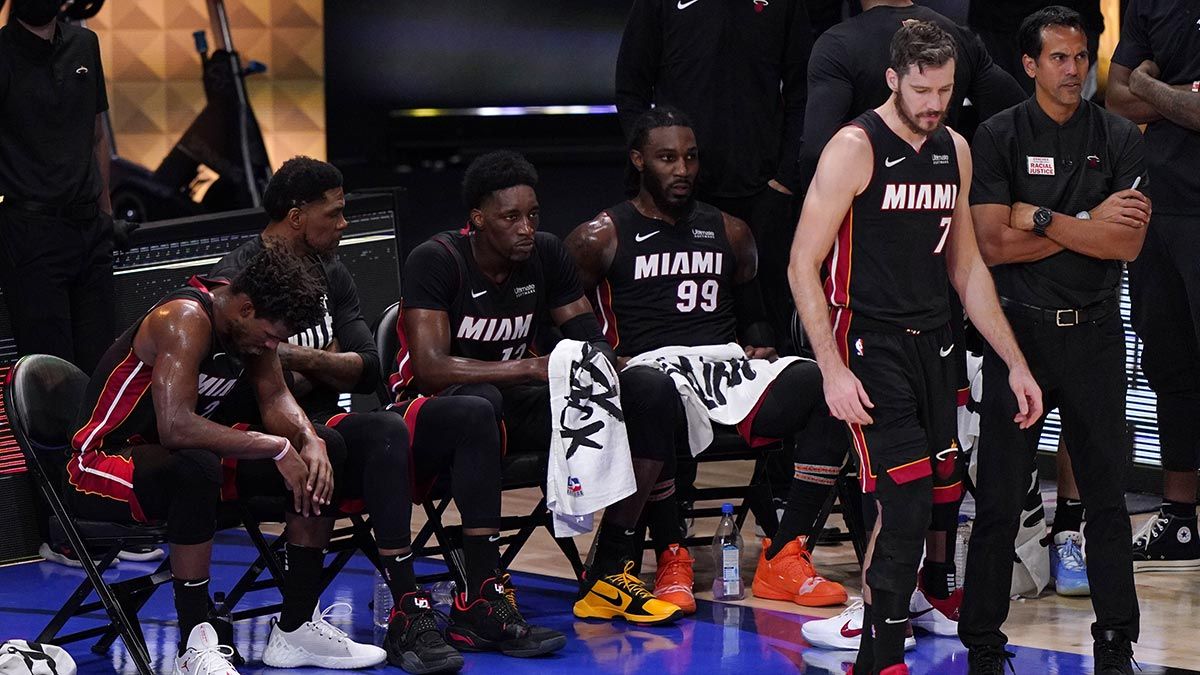 The Heat may have ended up as the surprise of the league this season, with All-NBA player Jimmy Butler’s arrival leading a turnaround that saw Miami go from missing the 2019 NBA playoffs to winding up in this season’s finals as a No. 5 seed. Riley raved about what Butler has brought to the Heat, and also lauded coach Erik Spoelstra for doing what he called a masterful job this season.

“Spo was the coach of the year, for me,” Riley said.

The Heat have long been expected to be a major player in the 2021 free-agent season, when names like two-time NBA MVP Giannis Antetokounmpo, two-time NBA Finals MVP Kawhi Leonard, Paul George and many others could potentially choose to hit the market.

What they do in this offseason will obviously affect their spending power next year.