PORTLAND, Ore. — The Denver Nuggets were undaunted, even when down 14 points in the third quarter and facing an antagonistic Portland crowd.

Nikola Jokic had 36 points and the Nuggets eliminated the Portland Trail Blazers in six games with a 126-115 victory Thursday night (Friday, Manila time).

"Nobody can take the fight out of us," Jokic said. "We will just go out there and fight and that's what we have been doing. We're never going to quit. Quit is not in our vocabulary."

Michael Porter Jr. added 26 points, including 22 in the opening quarter, for the third-seeded Nuggets. They await the outcome of the first-round series between the Phoenix Suns and Los Angeles Lakers.

Denver advanced to the Western Conference semifinals for the third straight season.

Damian Lillard finished with 28 points and 13 assists for the sixth-seeded Blazers. They led by 14 points in the third quarter but couldn't stave off elimination. 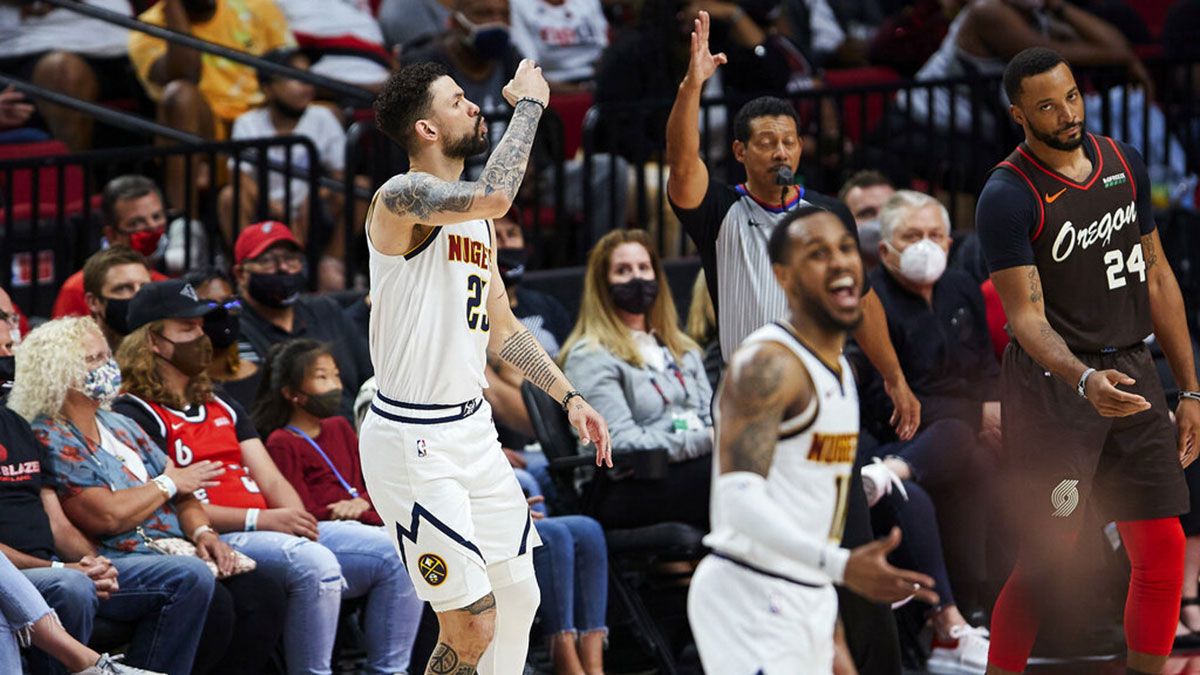 Austin Rivers celebrates after a crucial trey over a dejected Norman Powell.

Portland tried to catch up, pulling to 121-115 on CJ McCollum's layup, but Aaron Gordon hit a corner 3-pointer that all but sealed it for Denver with less than a minute to go.

"I think the key was when they were going on runs and we weren't playing our best every huddle was positive, staying engaged, demanding guys to be better, but staying together," Denver coach Michael Malone said. "I think we've shown as a group that every time we hit adversity, most times, we never run from it. We buckle down, we embrace it, we find a way."

"We didn't do what was necessary to win the series," Lillard said. "We've got to keep fighting, keep working and keep coming back to battle. Regardless of how it ended, we are always going to have our heads held high, have class. They won, congratulations to them, but it's back to the drawing board to us."

The Nuggets took a 3-2 lead in the series with a 147-140 double overtime victory in Denver on Tuesday night. It spoiled Lillard's epic playoff performance: He had 55 points, including 12 3-pointers, and 10 assists. It was the most 3-pointers ever in a playoff game.

The Blazers needed big man Jusuf Nurkic to stay out of foul trouble. Tasked with defending Jokic, he fouled out in three of the first five games.

Nurkic didn't have a foul in the first half, but then had four quick fouls in the third quarter and had to head to the bench.

"I think one of the reasons is they just outplayed us," Nurkic said when asked about what went wrong for the Blazers. "I give them credit, they had a hell of a season."

Porter had six 3-pointers in the first quarter alone, tying an NBA playoff record for most 3s a quarter.

"Here's a young man, 26 points in back-to-back games, and he's only a second-year player. So Mike is only gonna get better than he already is, which is a scary thought," Malone said. "It was important for Michael to get off to that start because he kind of kept us afloat."

Lillard hit a 3-pointer at the buzzer to give the Blazers a 68-61 lead at the half. He raised his arms to encourage the crowd as he headed off the floor.

Monte Morris had 22 points and nine assists off the bench. Nine of his points came in the final period. He finished with 28 in Game 5.

"I mean Monte, the last two games the way he's come up in the clutch in the fourth quarter, that's so huge for us," Porter said. "I can't say enough about that dude, just his composure, what he does for our team, it's pretty amazing. Especially being a backup point guard, he's stepping up on the biggest stage and showing what he's capable of."

Lillard admitted a collision with Porter in the fourth quarter shook him up.

"I was a little, not dizzy, a little woozy. He kind of knocked me off, he knocked me off my game a little bit. It was just a blow to the head. And the ref was right there," he said.

Lillard was honored before the game as the NBA's Twyman-Stokes Teammate of the Year award. The league's players vote to recognize "selfless play, on- and off-court leadership as a mentor and role model to other NBA players, and commitment and dedication to team." Carmelo Anthony and CJ McCollum presented Lillard with the award.

Nuggets: Jamal Murray was in Portland for the game. He had stayed back in Denver for the previous two away playoff games because of his torn ACL. ... Nuggets coach Michael Malone said his team had a Game 7 mindset going into the game, noting that Portland had 602 points through the first five games, compared to Denver's 599.

Trail Blazers: Errick McCollum was at the game to watch his brother play in person for the first time in four years. Errick McCollum plays pro basketball for BC Khimki in Russia. ... Lillard went into the game needing two 3-pointers for most ever in a playoff series, besting Donovan Mitchell's record 33 3s last year. He got a pair in the opening quarter. ... Nurkic said he did not know whether he'd return next year.
___