SAN FRANCISCO — Klay Thompson practically danced in delight. He dribbled through his legs a half-dozen times one day last week, then hopped on both feet to complete two circles all while triumphantly raising his right hand high in the air to acknowledge his cheering supporters.

Thompson is back to basketball at long last.

Stephen Curry's Splash Brother has been medically cleared and is scheduled to play in a game for the first time in more than 2 1/2 years on Sunday (Monday, Manila time) against Cleveland following two devastating injuries.

The Golden State star made it official on Saturday with his own creative announcement on Instagram as he so loves to do. In his post, Thompson wrote "Bill Murray is my spirit animal" with a video from the movie Space Jam and Murray's declaration of "Perhaps I could be of some assistance."

The Warriors followed shortly thereafter with a formal release that Thompson would be available against the Cavaliers.

Coach Steve Kerr wouldn't confirm Thompson's status following practice on Saturday, saying, "it's not my announcement or decision to make." He also instructed the media to watch their phones, offering thanks for putting up with his "charade."

Thompson will start but with fewer minutes for now. Everyone plans to be patient.

"The game needs Klay, he's one of the best shooters to ever play this game," teammate Juan Toscano-Anderson said. "... The magnitude of this moment is so big."

The 31-year-old Thompson hasn't played since suffering a torn ACL in his left knee in Game 6 of the 2019 NBA Finals as Toronto clinched the championship. While rehabbing from surgery for that injury, he tore his right Achilles tendon scrimmaging on his own in November 2020.

"When he comes back, if it's tomorrow night, it will be one of the most emotional nights of my basketball life," Kerr said prior to Thompson making it official.

Thompson, now sporting an old-school headband he plans to stick with as his curly hair is longer, knows it will take time to build back up to his pre-injury minutes and performance on both ends of the floor.

Tickets are at a premium for Sunday's home matchup following months of speculation on when Thompson would finally take the court again. He will do so at home in Chase Center as everyone wanted it to happen.

Thrilled with a productive warmup routine last Monday, Thompson later lifted both arms to the sky and ran off the court to a roaring ovation from the fans treated to watching his smooth shot as he neared closer to this day.

Teammate Draymond Green grinned watching Thompson exit through the tunnel to wild applause Monday night — thriving in the moment that will soon be far more meaningful than just his pregame regimen.

"The light at the end of the tunnel, you can see it," Green said, still smiling hours later. "I was very excited to see him walking off and embracing that love, holding his hands up. It was great. I've seen what he's been through the last 2 1/2 years and it's not pretty." 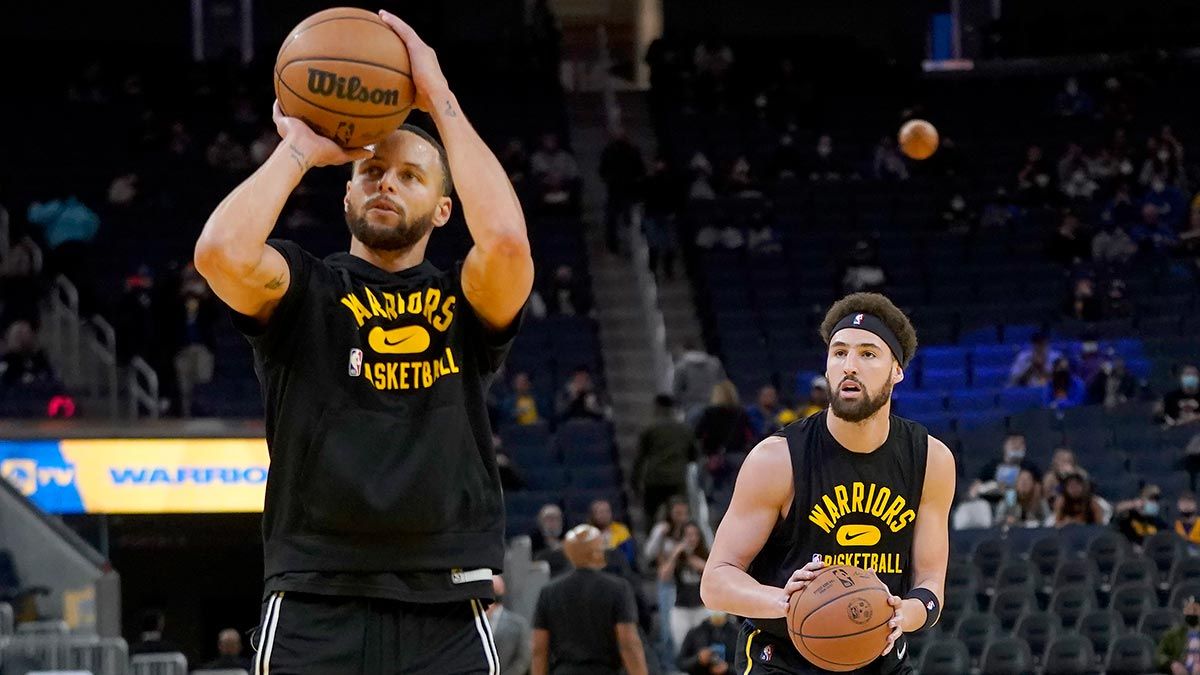 Green added: "For those fans to line up there like that and show that support for him, I was a little salty that once he walked off the warmup was dead after that. I had nobody watching me warm up. You want that for him. ... Definitely brought a smile to me. I was very happy to share the court with him for three minutes."

Kerr has said Thompson is "in a great place, mentally, spiritually, physically."

"I'm worried about him just enjoying playing basketball again," Curry said. "The narratives and the impact will take place accordingly, and as he gets more and more comfortable every game he plays he'll take us to another level."

The energy and enthusiasm is there. So is the swagger.

In November with the Warriors off to a sizzling 15-2 start, Thompson declared "it's championship or bust" while noting they'd be that much better once he returned.

Will he get right back to his old, dominant self? That's the plan, certainly.

In fact, Kerr spoke to the team about the adjustments of working Thompson back into the rotation, given there will be fewer minutes and opportunities for players who have contributed significantly already to this impressive start by Golden State.

One of the lasting memories of Thompson will always be how he re-emerged from the tunnel at Oracle Arena after injuring his knee against the Raptors to take his free throws.

Green can't wait for Thompson to do his thing at a high level again — and the five-time All-Star guard is determined to shine like he did with a 60-point performance in December 2016 and 37-point quarter before that in January 2015.