SAN DIEGO — Ty Lue was seven when the San Diego Clippers packed up their basketballs and uniforms and moved the 120 miles up the freeway to Los Angeles after the 1983-84 season, becoming the second NBA team to abandon "America's Finest City" in 13 years.

Even at 44, the Los Angeles Clippers' second-year coach is way too young to remember that struggling team, which featured oft-injured San Diego native Bill Walton as well as Norm Nixon and Terry Cummings.

But Lue knows enough about the tourist and Navy town to have his Clippers hold training camp in San Diego this week.

The Brooklyn Nets and Denver Nuggets had the same idea. The three teams are holding camp in cozy gyms at San Diego's three biggest universities.

For Lue, the reason for the move is simple: "I wanted to come here," he said with a laugh.

There's another attraction for the three teams, which all had championship hopes derailed by injuries last year, to descend on San Diego.

"Just to get away, focus on hoops, build team camaraderie, get guys away from their families and just lock into the team for five days," Lue said. "I thought it would be good for us. It has been good. ... Just the bond, just trying to learn more about each other."

There also are plans for golf and some fishing for the Clippers, who reached the Western Conference finals for the first time before losing in six games to the Phoenix Suns.

They are holding training camp at the practice gym at San Diego State, where Kawhi Leonard starred for two seasons before jumping to the NBA. Leonard is rehabbing after having surgery on his right knee a month ago. A partially torn right ACL during the playoffs kept him out of the conference finals.

All these decades later, it turns out there is some love between the Clippers and San Diego.

Although Leonard isn't on the court, the Clippers are reminded of SDSU's most-famous player by the large Klaw logo — based on one of Leonard's large hands — on one wall at the JAM center. Leonard often works out there during summers when he's healthy.

In early 2020, Clippers owner Steve Ballmer, then-coach Doc Rivers and the entire team flew down to San Diego to attend the halftime ceremony when SDSU retired Leonard's No. 15 at Viejas Arena.

Earlier this month, while breaking ground on his team's new $1.8 billion arena in Inglewood, Ballmer — who bought the team in 2014 — said Viejas Arena was the "most fun gym" he's ever been in and that it was "inspirational" for his team's new 18,000-seat arena. 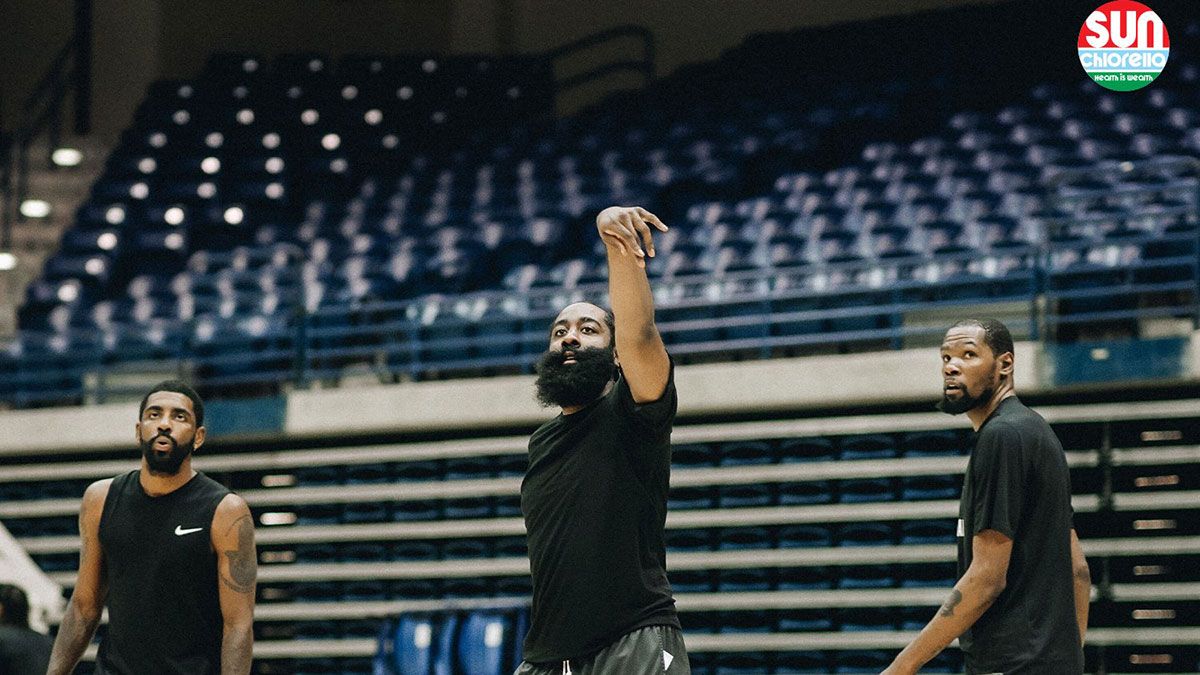 Some 13 miles to the north, reigning NBA MVP Nikola Jokić and the Nuggets are training at UC San Diego. The Nuggets have held camp at SDSU before. The team said UCSD's 5,000-seat RIMAC Arena offers a bigger space to accommodate the expanded camp roster than its practice site back in Denver.

It's unclear if the teams will cross paths in San Diego, but the Clippers will host the Nuggets on Monday night in an exhibition game at Staples Center. The Nuggets — swept out of the second round by Phoenix — then head to San Francisco to play the Warriors on Wednesday night. The Nets will play the Los Angeles Lakers on Sunday afternoon at Staples Center before heading home.

NBA teams have held camp before in San Diego — which lost the Rockets to Houston in 1971 — but it's believed this is the first time three teams have trained here.

Nash believes billionaire owner Joe Tsai, who has a home in La Jolla and also owns the San Diego Seals lacrosse team, had something to do with the Nets switching coasts for camp.

The Nets arrived to overcast skies.

"I was hoping for a little more sun, but we'll make do," Nash quipped. "It's obviously a beautiful part of the world. It's great for us to be out of our gym for a week and try to freshen things up and enjoy and bond. Obviously we want to do the things on the court that make us come out of this week feeling like we laid the foundations, but also to be able to come away from something special like this and bond is important as well."

The Nets lost in the second round of the playoffs to eventual NBA champion Milwaukee.

James Harden missed all but 43 seconds of Games 1-4 with a hamstring injury, and Kyrie Irving sat out the final three games with a sprained right ankle.

The Nets were expected to visit Tsai at his La Jolla home. After their first practice, they got to play golf.

"I'm about to go to Torrey Pines, get a few swings in, hope I can hit straight, not lose any balls," Nets guard Bruce Brown said.

Also on the itinerary: video games.

"We get to chill each other, play some video games, I'll beat anybody in that, in some FIFA," Brown said. "I already beat Sekou (Doumbouya) in FIFA, so anybody want to challenge me, I'm ready."