A TEAM of NBA greats led by Scottie Pippen and Dennis Rodman promised to put on a great show when it faces the PBA Legends on Wednesday night in the PLDT All-Star Basketball Challenge at the SM Mall of Asia Arena.

“We feel great and excited,” said Chicago Bulls legend Pippen in a press conference on Tuesday afternoon. “We know that we have a lot of fans here so we will put on a great show.”

Pippen will lead the NBA Legends to be coached by former Cincinnati Royal and Milwaukee Buck Oscar Robertson, the only player in NBA history to average in double figures in scoring, rebounds and assists in a season.

Pippen is in the country for the first time while Rodman, Grant and Richmond have been in the Philippines in the past.

“It’s always a pleasure to come back,” said Rodman, whose father Philander is based in Olongapo. “It’s a great city, great venue and great athmosphere and people just love the game of basketball.”

Codinera, who will also play in the game, doesn’t have any strategy for the game.

“We just want to have fun,” Codinera said. “We hope to hold our own but at the same time, we also want to thank the organizers for this wonderful opportunity.” 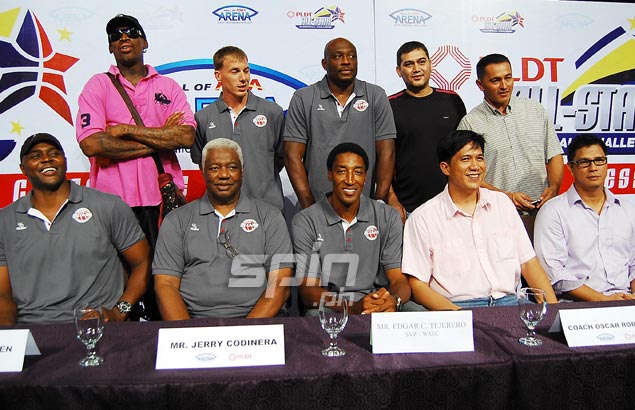