AS sure as the day is long, the continued growth of the National Basketball Association as a global sport is undeniable. And in the world's second largest media market — powerhouse China — there is no stopping basketball's immense popularity.

While China may be rightly or wrongly viewed as a political bully by some of its Asian neighbors, it has a soft spot for the NBA, using its economic might to once again bring preseason games onto its shores, this time showcasing the defending champions Golden State Warriors and the vastly re-tooled Minnesota Timberwolves.

According to the 2017 NBA Red Card report of the Mailman Group, China’s leading sports digital consultancy and marketing platform, basketball is warmly embraced as the most popular sport from the west.

After a blockbuster 2017 NBA Finals, the NBA is breathing more life in China's vast sports ecosystem. Against the Top 3 European Leagues that also have a strong following in China, the NBA is thumping the competition. And the numbers are staggering.

Since opening its doors to globalization over 30 years ago, the NBA has taken flight and it has sustained that success by providing an endless stream of iconic talents that ranged from Magic and Bird to Jordan and Kobe and now LeBron and Curry.

That being said, the NBA has attracted an active fan base that is sprouting exponentially with each passing day. And as NBA superstars, legends and franchises continue to tirelessly promote their brand, the NBA is tightly woven in the fabric of Chinese culture.

With less than three weeks to go before the 2017-18 regular season opens, the NBA is wisely feeding the frenzy by treating its rabidly loyal fans with two potentially exciting games in the Far East.

The NBA China Games 2017 featuring the Warriors and Timbwerwolves will take center stage before sold-out crowds at the Universiade Center in Shenzhen on October 5 and the Mercedes Benz Arena in Shanghai on October 8.

After keeping its core players by carefully navigating the complex salary cap, the Warriors are poised to be the next dynasty. The thought that the team's chemistry will only improve in Kevin Durant's second season teaming up with Steph Curry, Klay Thompson and Draymond Green in the Bay Area inspires fear among the rest of the contenders.

But the Minnesota Timberwolves are not blinking. For they too are a force to reckon with after team president and head coach Tom Thibodeau acquired serious reinforcement during a busy off-season.

While covering the 2017 NBA Summer League in Vegas last July, this writer asked coach Thibs if the upcoming season could see the end of Minnesota's 13-year playoffs drought. The former Bulls coach didn't say much, flashing instead a winsome grin.

The NBA China Games 2017 may only be a pair of exhibition games, but to those of us who rarely get to see these NBA stars strut their wares in the flesh, it's a golden opportunity of a lifetime.

The marketing slogan was right, after all. The NBA really is a place where amazing happens. 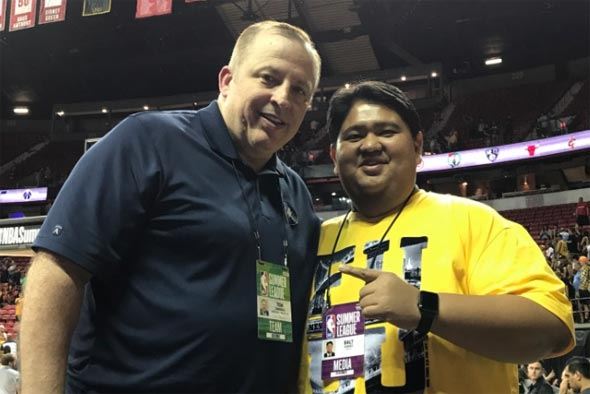 The author with Timberwolves coach and president Tom Thibodeau.