This year, Duke's Paolo Banchero was the No. 1 pick in the NBA draft. A choice some consider at least a mild surprise.

Next year, it’ll almost certainly be Wembanyama. That will be no surprise.

Those who haven’t heard of the 7-foot-3 French teenager probably should familiarize themselves over the next 12 months, because he’s coming to the NBA - and he’s already being touted as an immediate-impact player.

[See Banchero taken No. 1 overall by Magic in NBA draft]

The comparisons are many, and all are impressive. Physically, he reminds scouts of Kristaps Porzingis. In terms of the combination of height and shooting ability, he’s reminiscent of what Kevin Durant was at that age. And he’s carried around the can’t-miss label for a couple years already.

Plus, he’s been a pro for a couple of years.

Wembanyama plays for ASVEL, the French team owned by former San Antonio Spurs point guard and four-time NBA champion Tony Parker. And he turned plenty of heads with a 22-point, eight-rebound, eight-block performance against the United States in the championship game of last year’s FIBA Under-19 World Cup. The Americans beat Wembanyama and the French 83-81 for the gold medal.

There was no shortage of fashion statements at the draft.

Bennedict Mathurin picked a red suit with a floral theme and a bow tie. Tari Eason's suit was emerald. And No. 1 pick Paolo Banchero went with a bright purple suit covered with dozens of silver rhinestones attached throughout, along with a silver chain and “P5” medallion.

He was asked if the sparkly stones were real, and quickly confirmed that they were not.

“I'd have to have security follow me 24-7," Banchero quipped. 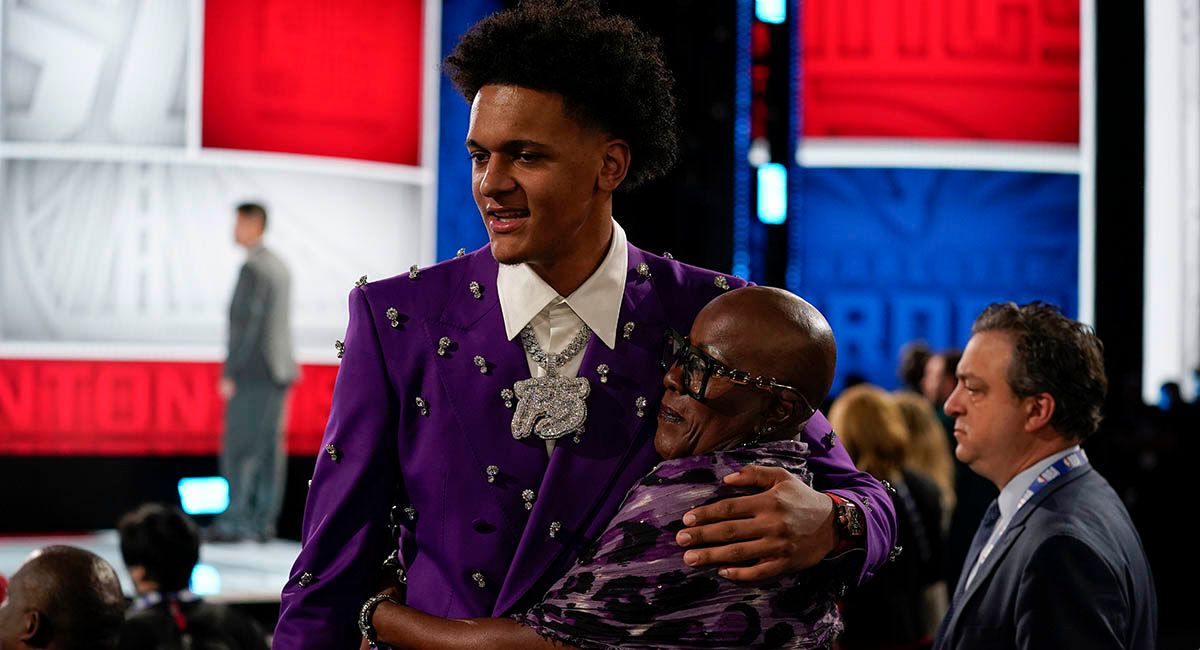 Both of his Banchero's parents went to the University of Washington and the Seattle native said he wore purple — the Huskies' primary color — as a tip of the hat to them and the school, even though he wound up choosing to travel across the country to play for Duke.

“I did it to pay my respects to them," Banchero said.

Chet Holmgren, the No. 2 overall pick from Gonzaga, wore a black velvet suit with a bow tie and dice hanging in a net from his chain. Purdue's Jaden Ivey wore a similar suit with a chain.

Baylor forward Jeremy Sochan chose a lavender suit, and No. 3 overall pick Auburn's Jabari Smith Jr. had pictures of his playing days with the Tigers sewn inside his suitcoat.

Bennedict Mathurin and Shaedon Sharpe went No. 6 and No. 7, respectively, in the draft.

And that was history for Canada — marking just the second time two players from that country went in the top 10 in the NBA draft. The other instance was 2014 when Andrew Wiggins was taken first overall by Cleveland, and Sacramento took Nik Stauskas with the No. 8 pick.

Duke has now moved ahead of Kentucky with the most No. 1 overall picks among colleges during the common era (since 1966) of the NBA draft with four overall — Banchero, Elton Brand (1999), Kyrie Irving (2011) and Zion Williamson (2019).