OKLAHOMA CITY — The Oklahoma City Thunder seem to wake up when they get down by double digits.

Mike Muscala scored 20 points in 14 minutes, and the Thunder rallied from 16 points down to beat the San Antonio Spurs, 99-94, on Sunday night (Monday, Manila time).

The Thunder have trailed by at least 16 points in all three of their wins. They trailed the Los Angeles Lakers by 26 before getting their first win of the season in Oklahoma City, then trailed the Lakers by 19 points last Thursday before winning.

What impressed Thunder coach Mark Daigneault most about Sunday's victory was how the Thunder handled the intensity level during their latest comeback.

"The stuff that really stood out to me is the physicality of the game and the competitiveness that we played with, especially in the second half," he said. "The fact that we could recognize in real time in the game that we needed to amp it up and then did it on a pretty quick turn."

Muscala made 5 of 6 field goals and 7 of 9 free throws in one of the most productive offensive games of his career. The 30-year-old averages 6.0 points per game for his career, which includes stops in Atlanta, Philadelphia, Los Angeles with the Lakers and Oklahoma City.

"Felt like I got into a little bit of a rhythm there, so that felt nice," he said. "I've kind of been struggling shooting the ball a little bit. I thought in general guys were really unselfish tonight passing the ball and trusting the shot, and that was a big point of emphasis in practice."

Shai Gilgeous-Alexander had 14 points, 10 assists and eight rebounds, and Darius Bazley added 11 points and 11 rebounds for the Thunder.

Eubanks said the Thunder are a talented young team that the Spurs overlooked.

"You play the Bucks, you play Brooklyn, you play L.A., you kind of get up for those games," Eubanks said. "We've got to learn from that, not just settling and continue to do what we do to keep those leads."

San Antonio had possession with 22.9 seconds left in regulation, trailing 97-94. Walker missed a deep 3-pointer off the backboard, Oklahoma City rebounded, and Muscala made two free throws with 3.6 seconds left to put the game out of reach.

Lu Dort's 3-pointer for Oklahoma City at the halftime buzzer cut the Spurs' lead to 55-45 at the break.

The Thunder continued the rally in the opening minutes of the second half. Rookie Jeremiah Robinson-Earl's jumper put Oklahoma City up 66-65.

The Thunder led 79-69 at the end of the third quarter. They outscored the Spurs 34-14 in the period, led by nine points from Gilgeous-Alexander. Oklahoma City made 13 of 24 field goals in the third.

San Antonio took an 84-83 lead before Bazley hit a corner 3-pointer, then threw down a nasty one-handed put-back dunk with his elbow at rim level to give the Thunder an 88-84 lead. Oklahoma City led the rest of the way. 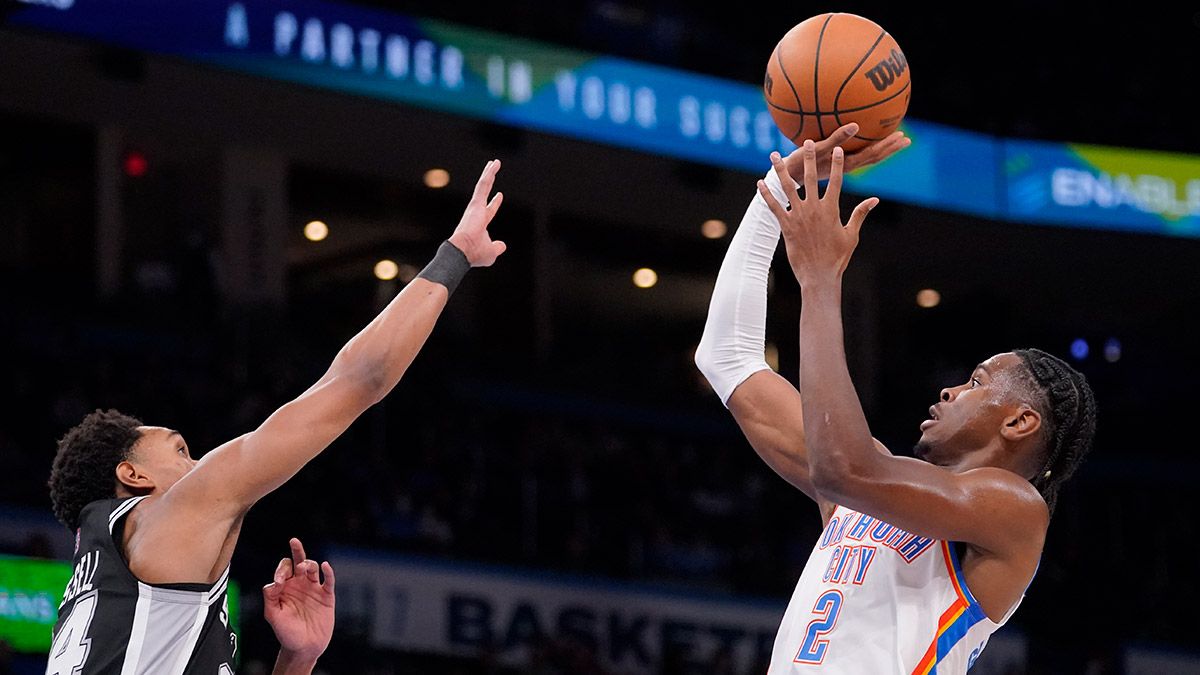 Shai Gilgeous-Alexander goes 5 for 16 in 36 minutes of action.

Spurs: Scored the game's first nine points. ... Dejounte Murray missed his first six shots and ended up making just 5 of 19. ... Eubanks scored 10 points on 5-for-5 shooting in the first half. ... Keita Bates-Diop went down hard in the third quarter and was holding his lower back before leaving the court.

Thunder: Missed their first seven shots. ... Shot just 6 for 26 from the field in the first quarter. ... Muscala scored 14 points in seven minutes in the first half. He made all four of his field goals, including three 3-pointers. ... Held the Spurs to 7-for-26 shooting in the third quarter.

Spencer Greene, an 18-year-old from Norman, Oklahoma, made a half-court shot during a break in the action to win $20,000 from MidFirst Bank. The two-handed fling banked off the glass and in, making him the second winner this season.

Vit Krejci became the first player to compete for the Thunder and their G-League affiliate, the Oklahoma City Blue, in the same day. According to the Thunder, it was the 59th time for a G-League player to play for their NBA team on the same day. Krejci had a defensive rebound in six minutes in the Thunder's win and scored nine points in 26 minutes with the Blue in a 114-81 win over Salt Lake City.

Spurs guard Derrick White missed all 10 of his shots and did not score. He entered the game averaging 13.7 points.