PHILADELPHIA — Trying to win a playoff series, the 76ers will settle for another Ty game.

Tyrese Maxey showed the NBA he's a playmaking, risk-taking, building-shaking, future-star-in-the-making for Philadelphia with a Game One stamped in franchise history as one of the best of the millennium.

Maxey had a game for the ages — specifically, one of four 30-point playoff performances on the same day by players 22 or younger — and became the youngest Sixer ever to score at least 30 points in a playoff game. Maxey's stat line in Game 1 against Toronto was worthy of, well, a Max contract as the Sixers romped to a 1-0 series lead. He made 14 of 21 shots and 5 of 8 3-pointers for 38 points in 38 turnover-free minutes.

"The shots that he was making. The confidence," 76ers forward Tobias Harris said. "It was just all coming together. Even from the beginning of the game, he had it going."

Can he keep it going?

The 76ers head into Game Two on Monday against the Raptors on a bit of a confidence high after dominating a team they lost to three times in the regular season.

The Raptors are on shaky ground, not just because of a 20-point loss, but because of a sprained left ankle suffered by rookie Scottie Barnes in the fourth quarter. Barnes was hurt when Joel Embiid stepped on his left foot and he collapsed to the floor. He grabbed his left ankle and needed help off the court. Barnes had 15 points, 10 rebounds and eight assists in his first career playoff game.

Seems to be a theme.

NEED TO KNOW: The 76ers won Game 1 without Embiid, the NBA scoring champion, filling the stat sheet. He finished with 19 points and 15 rebounds. Embiid averaged 30.6 points. The Sixers don't expect Maxey to drop almost 40 points a game the rest of the series. The Big Man is going to have to carry the load if they want to win the series. But all was not lost. "He created a lot of points. His presence created a lot of points," coach Doc Rivers said. "That's why he's so great. His presence creates scoring for us."

KEEP AN EYE ON: James Harden. He became in Game 1 one of only seven players in team history with at least 14 assists in a playoff game. Like Embiid, the scoring punch wasn't there. He missed 11 of 17 shots.

INJURY WATCH: The Raptors could be in trouble if Barnes can't go in Game 2. Nurse said Barnes, Thad Young (thumb) and Gary Trent Jr. (non-COVID illness) are doubtful for Monday.

PRESSURE IS ON: Toronto. The Raptors went 3-1 against the 76ers in the regular season, so certainly not all is lost yet. But if injuries and foul trouble — Fred VanVleet and Chris Boucher each fouled out in Game 1 — continue to plague the Raptors, it could be a short series. 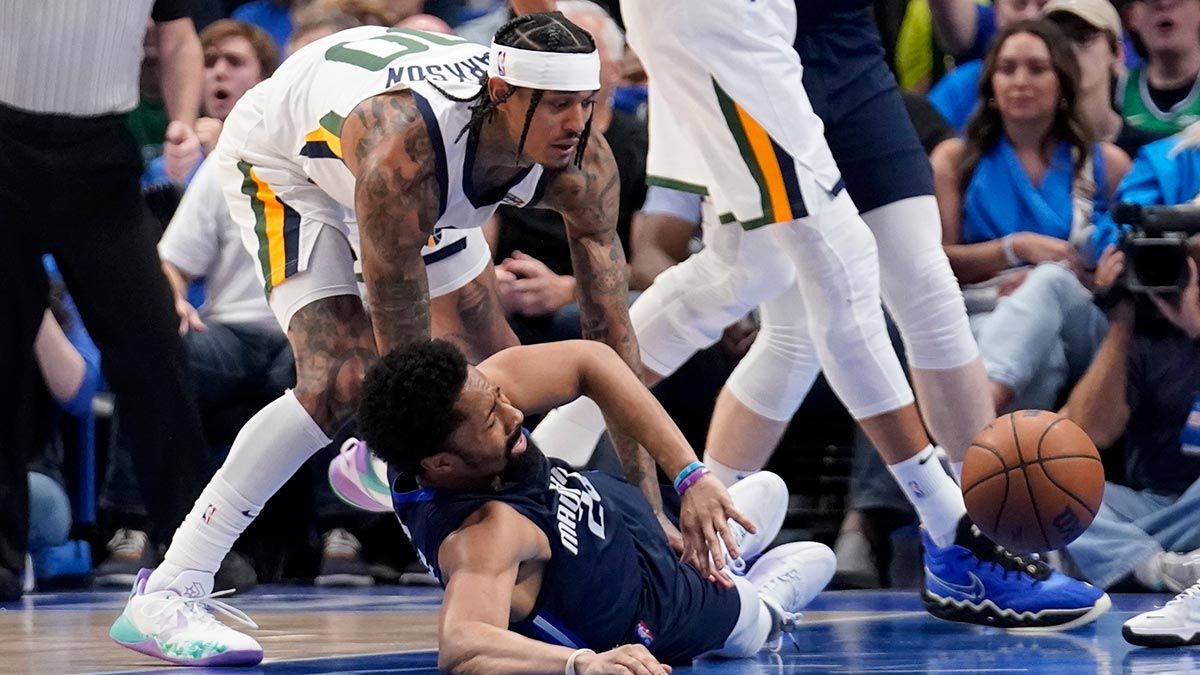 Jordan Clarkson and the Jazz eye back-to-back wins at Mavs.

NEED TO KNOW: While Dallas opened the series without All-Star guard Luka Doncic, the Jazz are healthy and put together quite a team effort in winning the opener. Utah coach Quin Snyder said the Jazz, who lost seven of their last 11 regular-season games to drop to the No. 5 seed, were aggressive and had no hesitation. "It's a mindset that our team has right now," he said. "Part of the reason we have it is, why not?" Jalen Brunson (24 points) and Spencer Dinwiddie (22) were the top scorers for Dallas without Doncic, as expected.

KEEP AN EYE ON: Jazz guard Donovan Mitchell always seems to play at his best in the postseason. The three-time All-Star got off to a slow start in the series opener, but then scored 30 of his 32 points after halftime. He had two 33-point games against Dallas in the regular season. He averaged 32.3 points in 10 playoff games last season, and a career-best 36.3 points in a seven-game series against Denver two years ago.

INJURY WATCH: Doncic is now a week removed from straining his left calf in what proved to be a meaningless regular-season finale on April 10. Coach Jason Kidd said Sunday that of Doncic, "he's able to do some basketball stuff today." The point guard is listed as doubtful for Game 2.

PRESSURE IS ON: Dallas. The home team won all four games during the regular season. Going down 2-0 in the series would be a devastating blow for Dallas after going 36-12 the second half of the season and earning home-court advantage to start the playoffs for the first time since its NBA title season in 2010-11. If Mavs go down 2-0, they'll be headed to a city where they've lost 11 in a row and are 24-73 all-time (one of the "road" victories was in the bubble).

NEED TO KNOW: Jordan Poole scored 30 points in his playoff debut and led the Warriors to a 123-107 victory in Game 1.

KEEP AN EYE ON: Klay Thompson. Thompson soaked in the scene at Chase Center and allowed himself to reflect on what being back on the playoff stage meant to him after what felt like an endless road of rehab - first following surgery for a torn ACL in his left knee suffered in the deciding Game 6 loss of the 2019 NBA Finals to Toronto, then for a torn right Achilles tendon he injured in November 2020. "So special," Thompson said after scoring 19 points with five 3-pointers in Game 1. "Before the tip I thought about all the days in the gym, all the days in the doctor's office, the surgery table, just to be flying up and down the court knocking shots down, playing solid defense, it was a surreal moment for me. To do it in front of the crowd we had, I give Dub nation some credit, they were so loud. It's something I won't take for granted."

INJURY WATCH: Stephen Curry returned in Game 1 and came off the bench to contribute 16 points in 21 minutes. He had missed exactly a month with a sprained ligament in his left foot.

PRESSURE IS ON: Nikola Jokic's supporting cast. With Draymond Green guarding him, the Warriors did a good job defending the reigning NBA MVP, who is going to need teammates to step up against the more potent Warriors.