On Doncic status, Mavs not answering beyond the generic ‘he's getting better’

THE Dallas Mavericks bought some time to get Luka Doncic involved in their first-round series against Utah by winning Game Two at home without their star.

If Doncic does return from a calf injury this week, it will be in one of the NBA's toughest arenas for opposing teams. The series, tied 1-1, resumes on Thursday in Salt Lake City (Friday, Manila time) where the Mavericks have lost 11 in a row.

"We need Luka back. We want him back ASAP," said Maxi Kleber, who played a huge role in evening the series with a career-high eight 3-pointers and a playoff-best 25 points in Dallas' 110-104 victory on Monday night. "But obviously we want him back healthy so he stays healthy and helps us because we know he's our best player."

That's the question the Mavericks aren't answering beyond the generic "he's getting better."

When Game Three tips off, it will be 11 days since Doncic strained his left calf when he was less than three minutes from going to the bench for good in what turned out to be a meaningless regular-season finale against San Antonio.

That's roughly the recovery time for the mildest calf strain, known as grade one. Beyond that, the optimistic outlook is a month — about the amount of time Kevin Durant was sidelined when he ruptured his Achilles tendon in his first game back with Golden State in 2019.

Durant's injury came in Game Five of the NBA Finals, and he missed all of 2019-20, even with that regular season resuming in the summer and the playoffs extending into the fall after a nearly five-month COVID-19 shutdown.

"I know he's dying to get out there soon. But he's got to take his time," said Jalen Brunson, who has taken the lead role at point guard with the three-time All-Star out and scored a career-high 41 points in Game Two. "I know he's doing everything in his power not to let his team down. But he has to make a decision that's best for him. I don't necessarily know where he is. I just know he's a competitor, he wants to be out there." 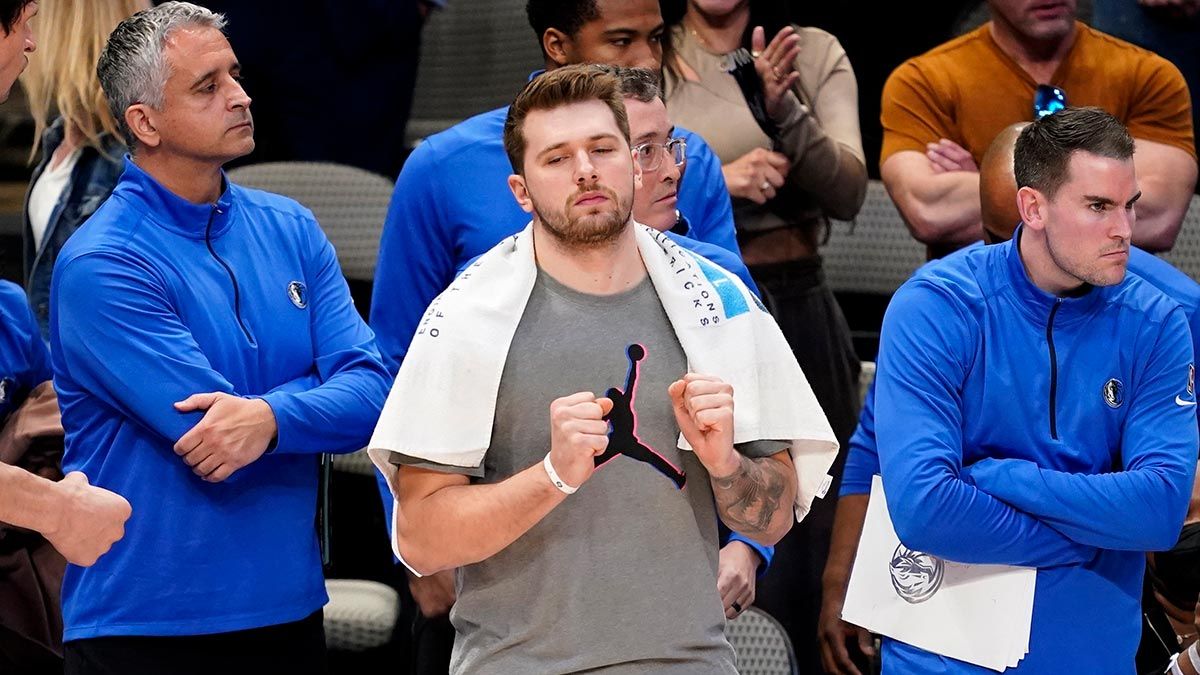 Luka Doncic has been out for more than a week.

Coach Jason Kidd has been coy from the outset with Doncic, even when the point guard on the only Dallas team to win a championship (2011) says he isn't trying to be. Asked what grade Doncic's injury was two days after it happened, Kidd said, "Medically, I don't know what a grade means."

The Mavericks do have a moment in history similar to this one. Kidd was between stints with the franchise that drafted him when, in 2003, Dirk Nowitzki sprained a knee early in Game 3 of the Western Conference finals against San Antonio.

Then-coach Don Nelson chose not to play the 24-year-old Nowitzki because he didn't want to risk damaging what everyone knew would be the face of the franchise for years to come. Even though he was cleared medically for a Game 6 the Mavs lost and were eliminated; Nowitzki said later in his career Nelson did the right thing.

Doncic is 23, and while a worst-case scenario with a muscle isn't quite as dire as one with a knee, the fact remains Doncic just signed a $207 million, five-year extension, a rookie supermax record. It kicks in next season.

"As an organization, that time is coming that we're going to have to make that decision, either way," Kidd said. "And that's one of the questions, when you have almost exactly the same thing: Do you play him or not? And we've gone through this once before. And we're going to be right back in that seat again."

The Jazz, who said they were happy to get the split in Dallas even though they missed an opportunity to beat the Doncic-less Mavericks twice, now wait with everyone else to see when, or if, the young phenom takes the court against them in this series.

"I think people think about it, and I think that's normal," Utah coach Quin Snyder said. "He's such a dynamic player that you have to. That said, I think planning for Dallas is more than just planning for Luka. They're obviously an excellent team even when he's not out there."

Better in Game Two than Game One, and now going somewhere Dallas simply hasn't been very good in recent years, with or without superstars. The Mavericks are 24-73 all-time in Utah.

"You buy time for Luka to come back. It's not rocket science," said guard Spencer Dinwiddie, a trade-deadline acquisition who also gets thrown into a leadership role when Doncic is out. "We want to have him back and quickly and as healthy as possible. But we're also focused on winning the series regardless."