LOS ANGELES — Lauri Markkanen had 27 points and 12 rebounds, Jordan Clarkson added 20 points, and the Utah Jazz continued their remarkable start to the season with a 130-116 victory over the Los Angeles Lakers on Friday night (Saturday, Manila time).

Kelly Olynyk had 18 points and Mike Conley added 15 points and 10 assists for the Jazz, who are off to a 7-3 start to a season in which they were widely expected to struggle. Utah blew most of a big lead in the third quarter, but surged to victory down the stretch while getting at least seven points from eight players.

Russell Westbrook had 28 points and six assists in another strong performance in a reserve role for the Lakers, who dropped to 2-6 after their two-game winning streak ended. Los Angeles has not won three consecutive games since Jan. 7.

LeBron James had 17 points and 11 rebounds in a strained effort while still recovering from an illness and dealing with pain in his left foot. Anthony Davis scored 20 of his 22 points in the first half.

The Jazz were widely expected to have a rough year after parting ways with Donovan Mitchell and Rudy Gobert in the offseason, but their roster full of longtime NBA supporting talent has been the surprise of the league through 10 games. With aggressive play and gritty scoring across its lineup, Utah has beaten a series of higher-regarded teams under first-year coach Will Hardy. 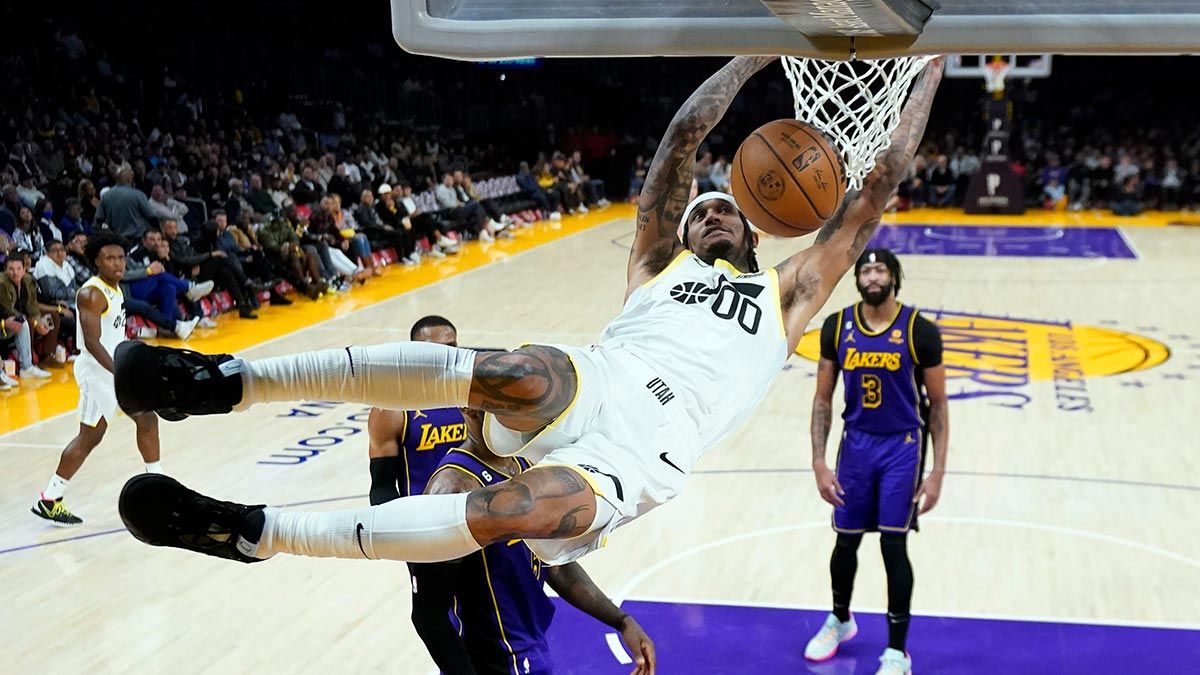 Jordan Clarkson and the Jazz are running third in the Western Conference behind Portland and Phoenix at 6-2.

The Lakers have been a solid defensive team during their terrible start to the season, but they couldn't keep up with Utah's pace or shooting accuracy in the first half. The Jazz hit more than 60% of their shots — including nine 3-pointers — and committed just three turnovers with their up-tempo, balanced attack.

Utah went up by 16 in the third quarter before Westbrook led the Lakers nearly all the way back, scoring nine points and leading a 24-10 run while keying Los Angeles' effort on both ends.

Westbrook was a target of many Lakers fans' ire last season, but they serenaded him with chants of "M-V-P!" at the free throw line and "We want Westbrook!" when he was on the bench in the fourth quarter.

Jazz: Talen Horton-Tucker got a tribute video during the first timeout. Horton-Tucker played the past three seasons with the Lakers after they drafted him in 2019, and he played a reserve role on their championship team in the Florida bubble in 2020. He was traded to Utah for Patrick Beverley in August. ... Italian rookie Simone Fontecchio played in the final moments after missing the previous four games in the NBA's health and safety protocols. ... Leandro Bolmaro missed his third straight game in the health and safety protocols.

Lakers: Davis (lower back pain) and James (foot) were both cleared medically for the game only after pregame warmups. ... Lonnie Walker scored 17 points and Troy Brown Jr. had 12.

Jazz: At Clippers on Sunday night.