Fultz added 11 rebounds and 10 assists, while Aaron Gordon had 21 points and a late go-ahead basket as the Magic became the first sub-.500 team to beat the Western Conference-leading Lakers this season despite blowing a 21-point lead in the second half.

Wes Iwundu scored a career-high 19 points, and Nikola Vucevic scored seven of his 19 points in the fourth quarter of the Magic's eighth win in 12 games.

LeBron James had 19 points and matched his career high with 19 assists before missing a tying 3-pointer with 3 seconds left for the Lakers (33-8), who hit the halfway point of their regular season with their first loss since Christmas.

Quinn Cook scored a season-high 22 points, including a 3-pointer at the buzzer, while Troy Daniels added a season-high 17 for the Lakers. Los Angeles finally lost in its fourth straight game without injured superstar Anthony Davis.

Kentavious Caldwell-Pope also scored 17 points for the Lakers in their final home game before a five-game road trip while the Grammy Awards take over Staples Center.

The Lakers erased an 87-66 deficit early in the fourth quarter with an impressive rally, but the Magic answered and traded big scores down the stretch. Gordon's basket with 2:03 left reclaimed the lead for Orlando.

Cook and James hit late 3-pointers that trimmed the Magic's lead to one point, but Fultz drove for a clutch layup with 15 seconds left to put Orlando up 118-115, and James' tying attempt went in and out. 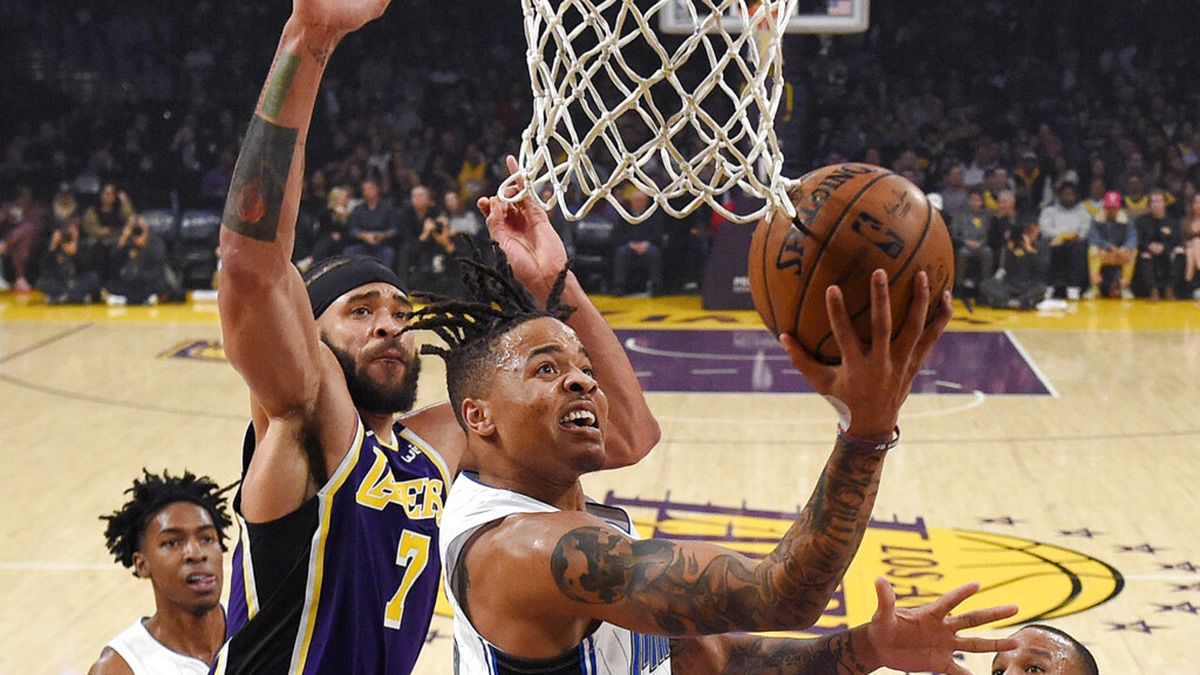 Markelle Fultz goes for a layup over JaVale McGee.

The Magic played without injured regulars Evan Fournier, Michael Carter-Williams and D.J. Augustin in their third stop on a six-game road trip.

Davis remained out of the lineup since he bruised his backside eight days ago, but the six-time All-Star likely won't be sidelined much longer.

Iwundu was outstanding for Orlando while starting in place of Fournier, who sat out with a bruised right quadriceps. The speedy guard surpassed his previous career high early in the third quarter.

Orlando jumped to a 20-point lead in the second quarter with an impressive scoring flurry against the Lakers' normally solid defense. The Magic had seven players with at least seven points in their exuberant first half.

The Lakers trimmed their deficit to seven points at halftime, but then gave up a 21-4 run by the Magic. The Lakers responded with a 28-6 rally, but couldn't finish.

Magic: Fournier's unavailability was determined shortly before game time. ... Augustin sat out for the second time in three games with a bruised left knee. ... Carter-Williams has missed 12 straight games with a sprained left shoulder.

Lakers: G Rajon Rondo missed his second straight game with a broken right ring finger. ... Alex Caruso went to the locker room after he got accidentally smacked in the face while stealing the ball from Mo Bamba in the second quarter. A concussion evaluation was inconclusive, and the valuable backup guard didn't return to the game. He will be re-evaluated Thursday.

Magic: Stay at Staples Center to face the Clippers on Thursday.

Lakers: Visit the Houston Rockets on Saturday to open a stretch of five road games in eight days.