Terrence Ross catches fire in fourth as Magic down Knicks

NEW YORK — Terrence Ross scored all 22 of his points in the fourth quarter, and the Orlando Magic beat the New York Knicks, 110-104, on Sunday night (Monday, Manila time).

Ross was one of six Orlando players to score in double figures as the Magic snapped a season-opening two-game losing streak.

Julius Randle and Mitchell Robinson recorded double-doubles for the Knicks, who lost their first game after opening the season with consecutive wins. Randle had 30 points and 16 rebounds, and Robinson 10 points and 10 rebounds. Derrick Rose scored 23 points, R.J. Barrett finished with 12 points on 5-for-17 shooting, and Kemba Walker had 10 points in 19 minutes.

The Eastern Conference rivals were playing the second half of a home-and-home series. New York had routed Orlando 121-96 on Friday in Florida. In that game, the Knicks set team records for 3-pointers attempted (54) and 3-pointers made (24).

They picked up where they left off, knocking down 7 of 13 3s in the first quarter. But that didn't last as New York made six more 3-pointers over the final three quarters. The Knicks finished 13 for 48 from long distance.

While the Knicks opened an insurmountable lead Friday, the Magic hung around this time and entered the fourth quarter trailing by six points, 80-74.

The Magic used a 12-0 spurt over the first 2:40 to take an 86-80 lead, highlighted by a 3-pointer by Ross and a thunderous dunk by Moritz Wagner over Obi Toppin that prompted Knicks coach Tom Thibodeau to call timeout.

That didn't do much as the Magic were able to hang on and record their first win of the season. 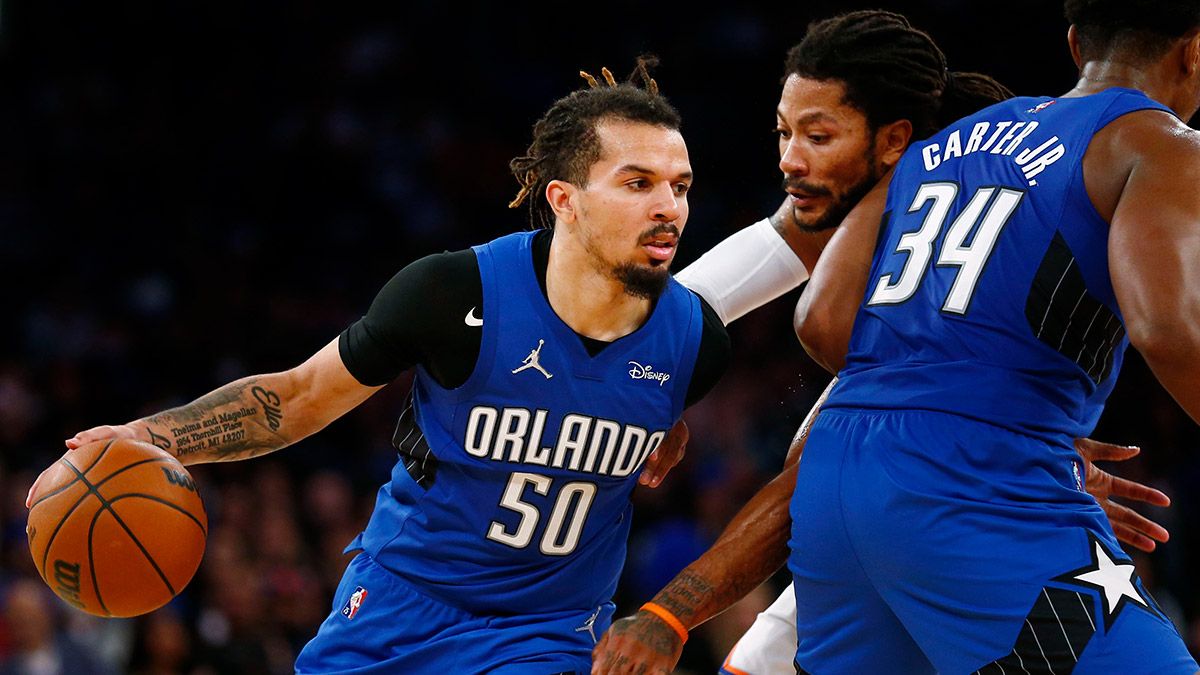 Magic: Entering the season, the Magic had nine players aged 23 or younger and have an average age of 25.1 years. That means head coach Jamahl Mosley's job will be molding young players into professionals. "It is a definite opportunity for these young guys to experience the league at this level," Mosley said before the game. "Playing very good, physical, top basketball teams. This is a great experience for them to have to walk into and learn from." ... According to Elias Sports, Orlando's starting lineup of Cole Anthony, Jalen Suggs, Franz Wagner, Wendell Carter Jr., and Mo Bamba had an average age of 21 years and 213 days, and was the youngest opening lineup in NBA history. The league has tracked starters' average age as far back as the 1970-71 season.

Knicks: Tom Thibodeau does not want his team taking shots just for the sake of taking shots. Rather, he emphasized the importance of taking the right shot. "I just want them to understand the value of shots," Thibodeau said in his pregame availability. New York's coach had been asked a series of questions about his team taking a franchise record 54 3s and making a franchise record 24 in the Knicks' 121-96 rout of the Magic in Orlando on Friday night. "We know the free throws are worth a lot. We know the layups are worth a lot. You know the dunk is worth a lot. You know the corner 3 is worth a lot. So understanding whatever your strengths are, play to those strengths. And then we put a lot of time into attacking the rim and making the right play."