ATLANTA — Franz Wagner scored 25 points, Robin Lopez had 10 points and a career-high 11 assists, and the Orlando Magic beat the Atlanta Hawks, 104-98, in a matchup of short-handed teams on Wednesday night (Thursday, Manila time).

Cam Reddish finished with a season-high 36 points and John Collins had 23 points and 11 rebounds for the Hawks, who have lost seven straight at home.

Both teams had to make plenty of adjustments before the game with so many players in health and safety protocols.

Hawks guard Kevin Huerter was taken out of the starting lineup after a positive test, joining Lou Williams and Timothe Luwawu-Cabarrot in protocols on Wednesday. Collins was the only regular in Atlanta's lineup. Bogdan Bogdanovich returned after missing eight games with a right ankle sprain and scored six points.

Aleem Ford's fast-break layup put the Magic back up by double digits early in the fourth quarter, and B.J. Johnson followed with a 22-footer that made it 76-63 before Lopez came through with a runner that caused the Hawks to call timeout with 9:12 remaining.

Wagner's three-point play pushed the lead to 89-73 with 6:27 left in the game. Wagner's runner at the 4:49 mark put the Magic up by 17 before Reddish's 3 pulled Atlanta within 10 and Orlando called timeout with 3:29 remaining.

The Hawks got as close as eight, but Gary Harris hit a pair of free throws to push the lead back to 10 and Orlando was never threatened again after Chuma Okeke buried a 3 from the left corner to make it 99-88.

Gravett connected with Aleem Ford for an alley-oop dunk to make it 34-25 midway through the second before Bogdanovich hit a runner to trim the lead to 38-32 at the four-minute mark of the period. Freddie Gillespie banked in an eight-footer at the buzzer to give the Magic a 10-point cushion at halftime.

Collins hit a 3 from the left wing to bring the Hawks within double digits at the 2:59 mark and he followed with a put-back jam to make it 63-56. Orlando led 70-61 entering the fourth. 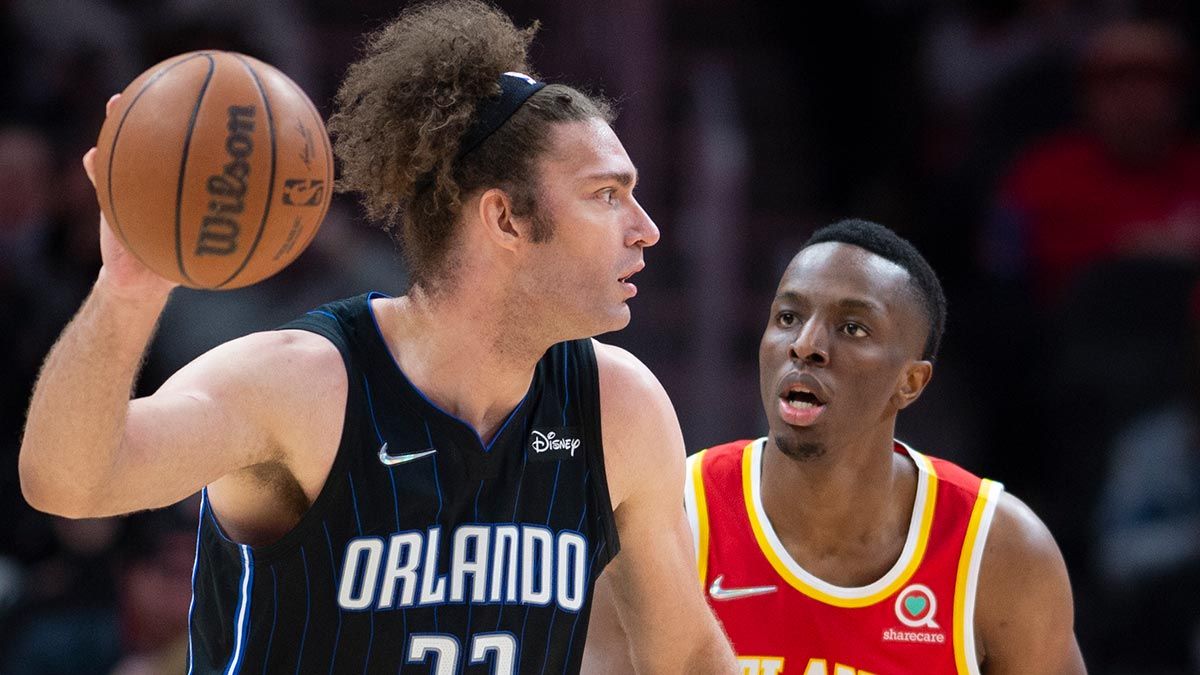 Robin Lopez post a huge doble-double for the Magic.

Magic: Orlando never trailed after Wagner hit a runner to make it 12-11 midway through the first. ... The Magic missed 15 of 19 3-point attempts in the first half. They finished at 29.7% on treys. ... Only eight of Orlando's 40 rebounds were on the offensive end.

Hawks: Had 11 of their 14 turnovers, nine of them on Orlando steals, in the first half. ... McMillan called his first timeout midway through the first after Orlando went on a 9-0 run to make it 19-11.

Hawks. At Philadelphia on Thursday.