Luka Doncic unfazed by series deficit: ‘I still believe we can win’

DALLAS — Luka Doncic and the Dallas Mavericks had to wait out a rain delay in the middle of the game and sweat out some tense moments near the end.

Once they did, they avoided a sweep and are still alive in the Western Conference finals.

Doncic had 30 points and 14 rebounds, and the Mavericks beat Golden State, 119-109, in Game Four on Tuesday night (Wednesday, Manila time), when there was a 16-minute rain delay at the start of the second half and the Warriors cut a 29-point deficit down to single digits late.

"Just got to finish the game. A win is a win," said Doncic, who was 10-of-26 shooting with only three made 3s but got plenty of help from his supporting cast.

It was the 10th double-double in his 14 games this postseason for Doncic, who also had nine assists. When he had 40 points in Game Three, Reggie Bullock shot 0 for 10 with seven misses from 3-point range.

"Everybody in that locker room felt like we had more basketball to play," Finney-Smith said. "We just wanted to get the win any way. ... Feel like we came out desperate that first half."

The loss snapped the Warriors' nine-game winning streak in Western Conference finals games, though they are still firmly in control of this series headed back to California for Game Five on Thursday night.

"It was almost like an ego win (for Dallas). You come out and really have nothing to lose. So that confidence started early," Stephen Curry said. "And we really didn't do nothing to slow it down, and then that's when the avalanche starts. You tip your hat to them."

Curry had 20 points and returned to the game with 3:22 left — his first appearance in the fourth quarter — after the Warriors had cut a 29-point deficit to 110-102. But they never got closer even after Curry and other starters returned to the floor.

"Just made the decision to see if we could pull off a miracle, but it wasn't meant to be," coach Steve Kerr said. "Dallas was great tonight. They deserved to win. This is the conference finals. This is how it's supposed to be."

Doncic then drove for a dunk and Bullock had his sixth 3-pointer, among the 20 long-range makes for the Mavericks, who have now have 11 games this postseason with at least 15 3s.

"I still believe we can win. Swept or not swept, if you lose, you lose," Doncic said. "Got to go game by game."

No NBA team has ever come back from a 3-0 deficit to win a series. Only three of the 146 teams to fall in that deep hole have even been able to force a seventh game.

The Mavericks have been swept in a best-of-seven only once in their 34 such series. That was against Oklahoma City in the first round of the 2012 playoffs, after Dallas won its only NBA title the previous season.

Rain leaking through the roof at American Airlines Center caused the delay after halftime. There was heavy rain outside, and there were at least two leaks. One was dropping water near the Golden State bench, and at the other end of the court water appeared to be falling in the stands.

It was the second such delay this season in the 21-year-old building. The start of a March 21 game against Minnesota was delayed 15 minutes because of water dripping near the visitors bench. 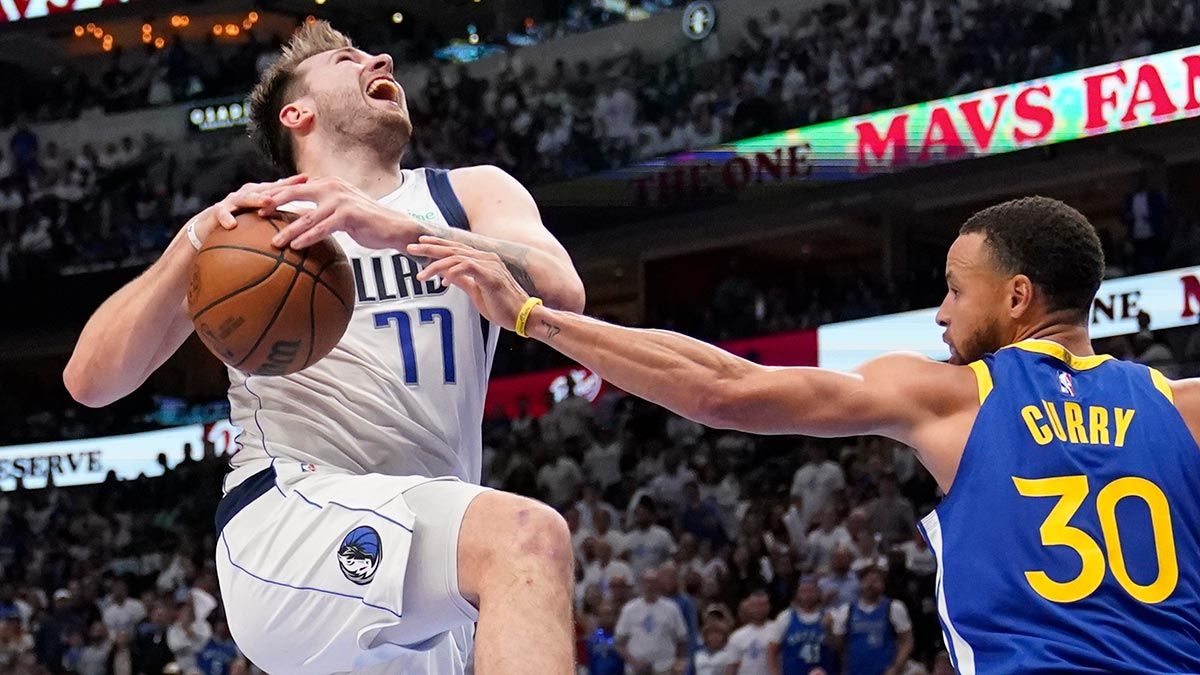 Luka Doncic and the Mavericks stay alive in the Western Conference finals.

Dallas went ahead to stay with a 25-6 run over a nearly 7-minute span of the second quarter during which the Warriors missed nine of 10 shots and had two turnovers.

Golden State was up 31-29 after a jumper by Moses Moody, then had only one made basket the next seven minutes. A 3-pointer by Davis Bertans put the Mavericks in the lead for good.

The Mavericks had a 62-47 halftime after Doncic drove for a hard layup, responding to Curry's basket at the other end.

A moment of silence just before tipoff came hours after an 18-year-old gunman opened fire at a Texas elementary school about 375 miles away in Uvalde, Texas, which is west of San Antonio in the southern part of the state. The moment also recognized a teacher-coach from Palestine, Texas, who was killed when his car was hit by a wrong-way driver when driving the just more than 100 miles home from Game 3 on Sunday night. Two students with him were injured.

Curry had his 100th career 20-point playoff game. He is only the 16th player to accomplish that. All others ahead of him are either in the Naismith Memorial Basketball Hall of Fame, are still active players, or are retired and not yet eligible for Hall induction — such as Mavericks star Dirk Nowitzki.

The Warriors were without Otto Porter Jr., who averaged 10.5 points on 82% shooting the first two games before leaving Game 3 because of a sore left foot. He didn't dress Tuesday.

Draymond Green went to the free throw line midway through the third quarter and his first attempt came to a complete stop on the wide back side of the rim. After Doncic and Green stood in the lane together laughing about that, the ball was eventually knocked down. Green then missed the second attempt as well, and rebounded by Doncic.