Lillard on 55-point effort: ‘It don’t matter, we lost’

DENVER — On Damian Lillard's record-breaking night when he was hitting one shot after another from behind the arc and almost beyond belief, it was Michael Porter Jr. who quietly sank the biggest basket of all.

MPJ's 3-pointer from the left corner barely fluttered the net with 1:33 left in the second overtime and proved the game-winner as the Denver Nuggets squelched an epic comeback by the Portland Trail Blazers with a 147-140 win on Tuesday night (Wednesday, Manila time) in Game Five of their best-of-seven playoff series.

"That's what playoff basketball is," Porter said after the thriller that included a dozen lead changes and 11 ties, including long 3s by Lillard that forced overtime and the second OT.

Lillard's night included a franchise playoff record 55 points and NBA playoff record 12 3-pointers. He eclipsed the mark of 11 set by Golden State's Klay Thompson at Oklahoma City on May 28, 2016.

"At this point, all that matters is we can't lose another game in the series," Lillard shrugged.

And he, for one, isn't going to dwell on his big night and even bigger letdown.

"If I don't put it behind me, and hold onto it, it's going to get in the way of what we need to do in the next one," Lillard said.

And his teammates didn't score again, either.

Nikola Jokic, who scored 38 points and came one assist shy of a triple-double, tied it at 140 with a layup and Porter broke the tie with a 3 from the left corner with 1:33 left off a sweet pass from Jokic.

The Blazers still were within three points — and Lillard's range — until a pair of costly mistakes sent them back to Portland for Game 6 on Thursday night trailing the Nuggets 3-2 in the best-of-seven series.

"It's a shame we wasted one of the all-time best performances by not being more supportive of him," McCollum said.

Lillard's 3-pointer with three seconds left in regulation tied it at 121, capping a 22-point comeback. His 3 with 6.4 seconds left in the first overtime tied it at 135 and that capped Portland's comeback from a quick nine-point deficit in the extra period after Denver hit a trio of 3s.

"We won and lost that game so many times before ultimately winning it," Nuggets coach Michael Malone said. "... We never got down. Every time they threw a haymaker and got us down on the canvas, we got up and were able to pull it out in the end."

Porter, who finished with 26 points, said it wasn't hard to keep composed when Lillard kept hitting daggers to extend the game.

Jokic, who added 11 rebounds and nine assists, was amazed by Lillard's performance.

"It was a pleasure to be on the court," he said, "just to witness that."

ORDER ON THE COURT

Nuggets coach Michael Malone had a strong reaction to the spate of bad fan behavior across the NBA, saying it "tarnishes the game."

"People are acting the fool. That's my reaction. And it's almost like it's a copycat thing now: who can one-up the other person?" Malone said. "... I think some people are coming out of this COVID pandemic and maybe they just are trying to express themselves. But that's not the way to do it. Let the players play the game, enjoy the game and keep your (rear) in the seat, keep your water bottles in your lap and please don't spit or use any racist language to any player." 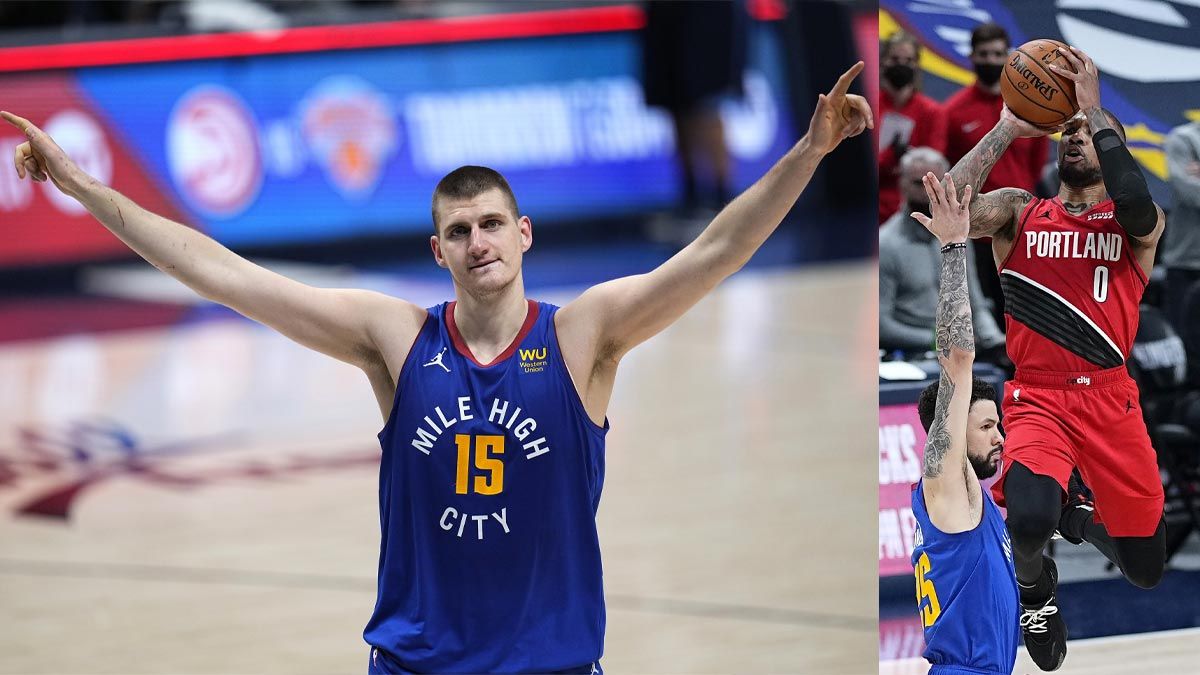 Nuggets: Denver's first basket of the second half came at the 9:51 mark on Aaron Gordon's dunk. ... In a three-second sequence in the second quarter, Jokic blocked consecutive shots by Norman Powell and Nurkic. ... The Nuggets went 5 for 7 on 3s in the extra periods to Portland's 4 of 12.