Lillard's previous career high was 60 points earlier this season against Brooklyn. His 11 3-pointers were also a team record.

It was the seventh regular-season game of Lillard's career with more than 50 points. He also had 10 rebounds for his 10th double-double of the season.

Hassan Whiteside added 17 points and 21 rebounds for the Blazers, who snapped a two-game skid.

The Blazers trailed by 12 in the third quarter but clawed back in the fourth. Lillard's layup and free throw gave Portland a 110-109 lead with 2:26 left, but rookie Eric Paschall dunked to give the lead back to Golden State with less than a minute to go.

Alec Burks added a pair of free throws for the Warriors to extend the lead, but Lillard made a 3 tied it with 14.9 seconds left, and the game went to overtime.

Willie Cauley-Stein's dunk put the Warriors up 121-115 in the extra period. Anfernee Simons hit a 3 to pull Portland closer before Lillard's 3-pointer with less than a minute left tied it. Gary Trent Jr.'s layup gave Portland the lead with 34.6 seconds to go.

Burks' 3-pointer briefly gave the Warriors back the lead, but Lillard and Whiteside each added a pair of free throws to seal it. The crowd stood and cheered as Lillard made the free throw that gave him the record.

Burks finished with a season-high 33 points, and Paschall added 22 points and 13 rebounds.

Both teams were drastically limited, personnel-wise.

The Warriors, hit hard by injuries this season, essentially had eight available players. Draymond Green suited up but coach Steve Kerr said before the game that it was unlikely Green would play because he wasn't felling well.

Glenn Robinson III remained out because of an an ankle injury. Kerr said he hoped to have Kevon Looney (abdominal soreness) back later this week. The Warriors started D'Angelo Russell, Damion Lee, Burks, Cauley-Stein and Paschall for the second straight game. 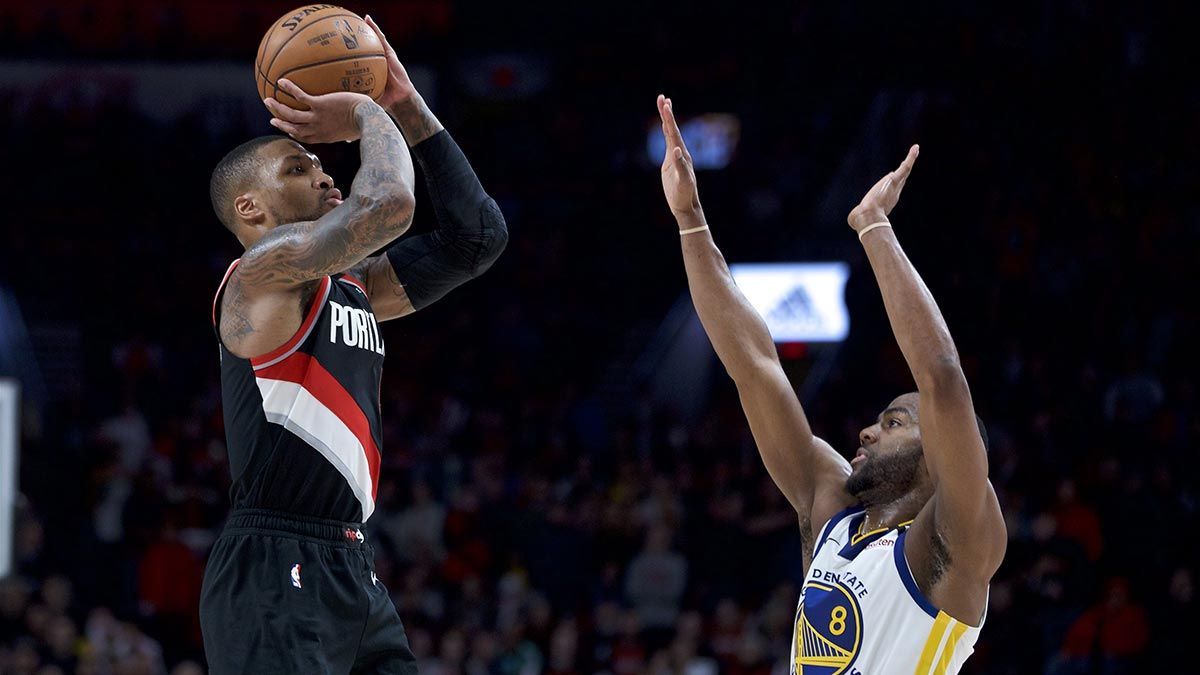 The Blazers, who had just nine players available, were without CJ McCollum for the second straight game because of a sprained left ankle. Simons started in his place.

Portland was also without Kent Bazemore and Anthony Tolliver, who are set to be traded along with draft picks to the Sacramento Kings for Trevor Ariza, Wenyen Gabriel and Caleb Swanigan. But the deal hasn't been finalized, meaning the already injury-hampered Blazers were further depleted.

Led by Lillard's seven points and four assists, the Blazers led 27-23 at the end of the opening quarter. The Warriors missed all eight of their 3-point attempts in the first, but Russell opened the second quarter with back-to-back 3s to give Golden State a 29-27 lead. The 3-pointers started a 12-0 run that gave the Warriors a 35-27 lead.

Golden State extended the lead to 44-33 but Portland closed the gap to 57-53. The Blazers struggled from 3-point range in the opening half, making just two of 15 attempts.

Paschall's dunk and jumper gave Golden State a 77-65 lead midway through the third quarter. The Warriors held a 92-87 lead going into the fourth and were able to stay in front until Lillard's 3-pointer put Portland up 103-102 with 6:53 left.

The Warriors were coming off a 109-95 victory over the Orlando Magic that snapped a 10-game losing streak and a five-game slide at home.

Warriors: Klay Thompson and Stephen Curry were in Pullman, Washington, over the weekend when Washington State retired Thompson's No. 1 jersey. Thompson's return this season is uncertain while he rehabs from the ACL injury he sustained in the NBA Finals. Curry has a broken left hand but there's speculation he could return following the All-Star break. Curry was at the game in Portland.

Trail Blazers: Low on available players, the Blazers transferred Moses Brown to Portland from the Texas Legends on Sunday. ... It was the first of a four-game homestand for Portland. ... Lillard is the second NBA player with multiple 50-point games this season, joining Houston star James Harden.

The Warriors host Utah on Wednesday.