LeBron preparing for Game Six as if AD is not playing

PHOENIX — The Phoenix Suns made LeBron James look away.

Riding an orange wave of support in the desert, the Suns sent the four-time league MVP to the locker room early and took control of their first-round playoff series with a 115-85 dismantling of the Los Angeles Lakers on Tuesday night (Wednesday, Manila time).

The Suns lead 3-2, one win shy of becoming the first team in 15 tries to send James packing in the first round of the playoffs.

The Suns won in Los Angeles on Sunday to tie the series and went right at the Anthony Davis-less Lakers in front of a revved-up crowd in Game Five.

Davis was out after suffering a groin injury in Game Four and the Suns took advantage by attacking every chance they had. The Lakers put up little resistance, allowing Phoenix to score nearly at will while building a 30-point halftime lead — Los Angeles' largest halftime deficit in 25 years.

Booker scored 30 points after two quiet games, the Suns made 14 3-pointers and had just four turnovers against the NBA's regular-season defensive efficiency leader.

The only bad news: point guard Chris Paul took a shot to his injured right shoulder in the third quarter and did not return.

"It scared me," said Paul, who added he should be all right. "It was just a very uncomfortable feeling, kind of helpless."

James scored 17 of his 24 points in the third quarter, but couldn't rally the listless Lakers. He sat at the end of the bench by himself in the fourth quarter before heading to the locker room with about five minutes left.

Game Six is Thursday in Los Angeles and the Lakers need to find some answers, quick.

"We got our ass kicked. It is that simple," James said after losing consecutive first-round games for the first time in his 15-year career. "They did whatever they wanted to win this game."

The series between one-time rivals has been shaped by injuries.

The Suns won the first game in the desert despite Paul injuring his shoulder. Los Angeles won the next two with Paul ailing, then Phoenix took Game Four, 102-94, in Los Angeles after Davis went down with a groin injury.

The Suns took advantage of Davis' absence early in Game Five, repeatedly getting into the lane for shots or kickouts for open looks.

Booker was the biggest beneficiary.

He had been relatively quiet the previous two games — at least for one of the league's top scorers — scoring a combined 36 points on 11-of-24 shooting. Phoenix's young All-Star came out firing in the pivotal game of the series, scoring 18 points in the first quarter and hitting a corner jumper to put the Suns up 18 early in the second.

"I just wanted to be aggressive," Booker said. "In studying film, I think I passed up a lot of quick ones."

Booker wasn't the only one dropping shots.

The Suns had their way against Los Angeles' reach-and-swipe defense, leaving the Lakers flat footed with their quickness and rapid ball movement.

Phoenix made eight 3-pointers, 26 of 48 shots and had one turnover to lead 66-36 at halftime. It was the Lakers' largest halftime deficit since trailing Utah by 26 in 1998, according to SportRadar.

The Suns kept on the gas even as James became more aggressive in the third quarter, maintaining a 29-point lead heading before both teams emptied their benches in the fourth.

"We didn't play well on either side of the ball," Lakers coach Frank Vogel said. "We'll find out what we are made of and how bad we want this." 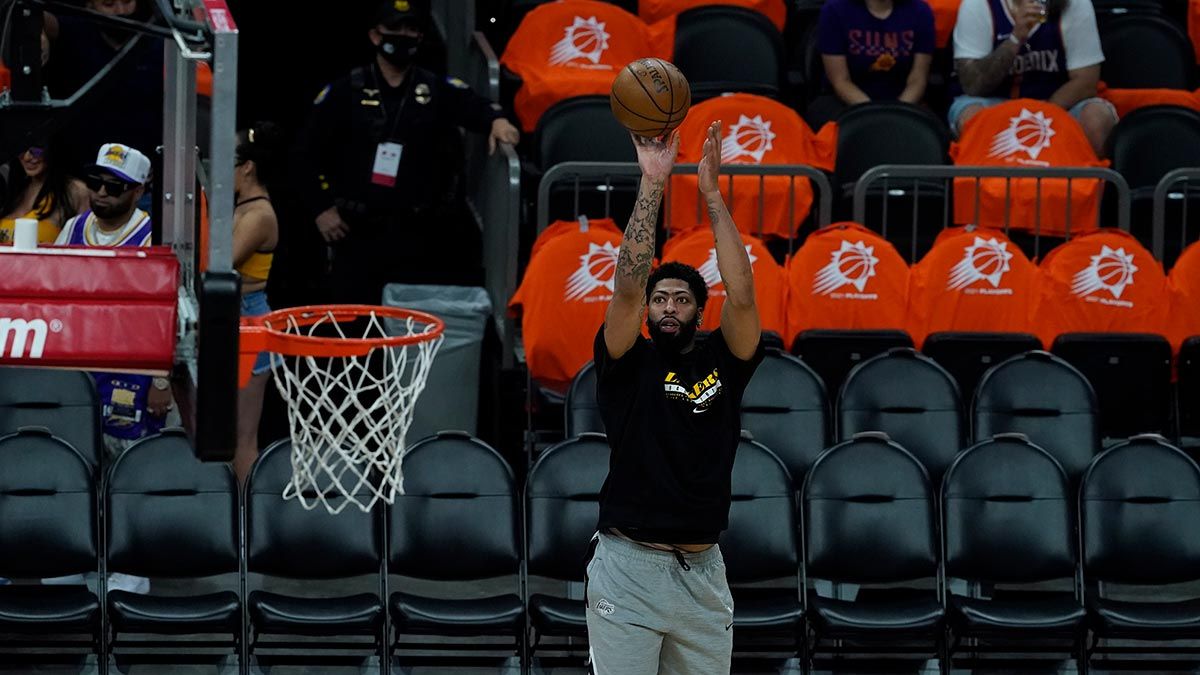 Paul reinjured his shoulder midway through the third quarter when he got tangled with Lakers guard Wesley Matthews while fighting for a rebound and hit the floor. Paul pointed toward Matthews as he went off the floor and was immediately attended to by Phoenix's trainers.

Paul got up after a minute or so and walked around, setting off a round of MVP! chants from the crowd. He returned to the game to hit two free throws and received a loud ovation before heading to the locker room for treatment.

Lakers: Kyle Kuzma was the only other Los Angeles player to score in double figures with 15 points. ... Markieff Morris, who started in place of Davis, had four points on 1-of-2 shooting. ... Lakers guard Dennis Schroder, who had been providing the Lakers with a lift, finished with no points on 0-of-9 shooting, including 0 for 4 on 3s.