LeBron on fading Lakers: ‘Until you cut my head off, I've got a chance’

LOS ANGELES — Luka Doncic scored seven of his 25 points in the fourth quarter, Jalen Brunson added 22 points and the Dallas Mavericks rallied for a 109-104 victory over the Los Angeles Lakers on Tuesday night (Wednesday, Manila time).

Dorian Finney-Smith had 16 points and nine rebounds for the Mavericks, who hung on for their eighth win in 10 games after blowing a huge early lead on the struggling Lakers.

Dallas trailed 100-94 with seven minutes to play before scoring 11 consecutive points in a rally kicked off by Brunson's fourth 3-pointer.

"At halftime we told them, 'They're coming. LeBron is coming,'" Dallas coach Jason Kidd said. "In the third quarter, LeBron put on a show, but we didn't lose our composure. That's one of the things we've gotten better at, and in the fourth quarter we got back to what we've done at Golden State. We held them to 17 points, and that's pretty good."

Doncic went 9 of 21 and looked significantly less sharp than in most previous games during his monthlong scoring tear, but made enough big baskets to win it.

"We stayed together and just executed the game plan, played the game," Doncic said. "My mentality is to close the game with the best shot possible. We executed down the stretch."

LeBron James scored 26 points and Carmelo Anthony had 20 for the Lakers, who took their sixth loss in seven games despite erasing a 21-point deficit in just over 12 thrilling minutes spanning halftime. Los Angeles managed only four points in the final seven-plus minutes.

"I don't know if you can do a better job on Luka than we did tonight," Lakers coach Frank Vogel said. "Our guys really competed. Our helpers really competed, but he had that stretch in crunch time where he scored a few buckets in a row. Not good enough. ... It hurts. All these guys are hurting in there. We're putting in the work."

Despite giving a much better effort against Dallas than in its most recent games, Los Angeles has lost 15 of 21 to slide a season-worst seven games below .500, with even its position in the postseason play-in tournament looking increasingly tenuous. Los Angeles is 0-3 since the All-Star break.

Two nights after the Lakers were booed by their home fans in a lifeless blowout loss to New Orleans, James and his teammates had the crowd applauding their effort and comeback — but the result was the same.

Dallas wrapped up a five-game road trip with four victories, but only after surviving a largely poor second half.

The Mavs jumped to their big lead during a first half highlighted by Doncic's incendiary one-handed putback dunk over Dwight Howard late in the first quarter.

"I hit my head (on the rim)," Doncic said with a laugh. "We're not going to talk about that. Let me enjoy the moment."

The first half looked like another wreck for the Lakers, who got three technical fouls for arguing amid their missed shots and lapsed defense. Vogel, Kent Bazemore and Russell Westbrook, who missed eight of his first nine shots, all got rung up.

But Los Angeles made a 22-7 run out of halftime and pulled even with cold-shooting Dallas on James' 3-pointer. 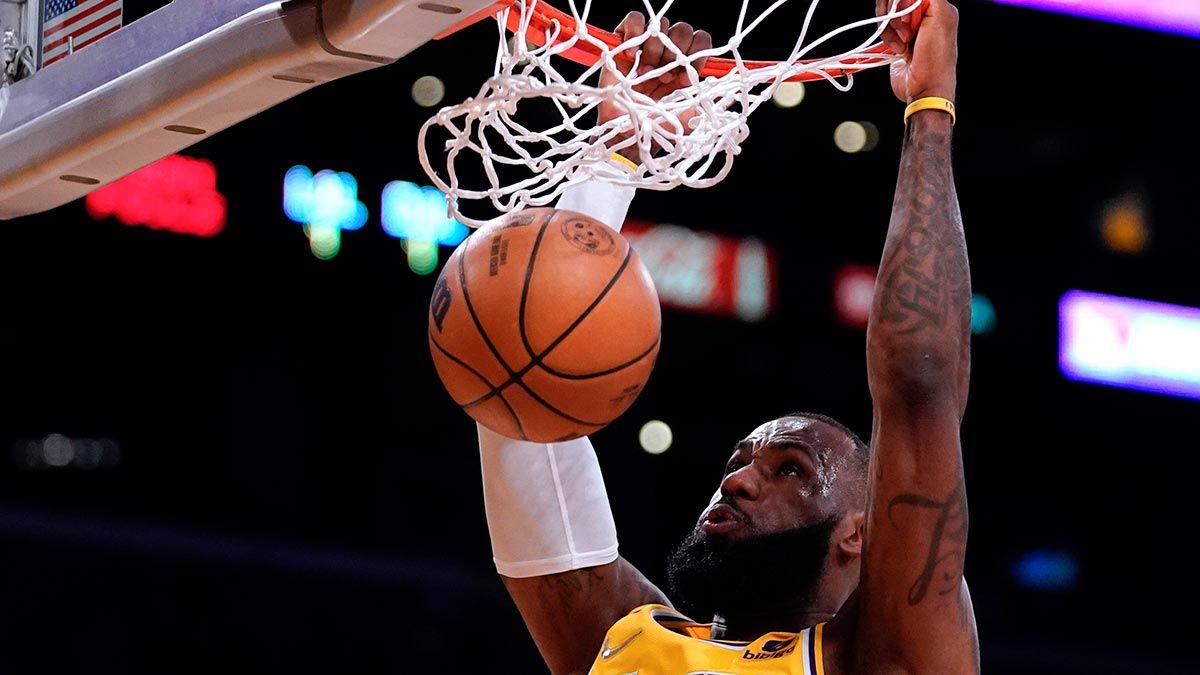 LeBron James and the Lakers are running ninth with a 27-24 win-loss record.

Mavericks: Dallas avenged a loss at home to the Lakers in December while Doncic was sidelined with an ankle injury. ... Spencer Dinwiddie had 14 points and nine assists.

After essentially standing pat with an ugly hand at the trade deadline, the Lakers on Tuesday waived disappointing center DeAndre Jordan and signed veteran point guard D.J. Augustin and journeyman forward Wenyen Gabriel. The newcomers weren't yet in town, but should be available later this week.

Westbrook went 5 for 17 and missed all four of his 3-point attempts in the latest frustrating game for the 2017 NBA MVP — although his 38 minutes were turnover-free.

Lakers: At Clippers on Thursday.