LeBron: ‘I don't feel like I have been in the league 19 years’

LOS ANGELES — One day after quietly celebrating his 37th birthday at home with his family, LeBron James put on an age-defying performance.

James became the oldest player in NBA history to have a game with at least 40 points and 14 rebounds, scoring a season-high 43 on Friday night (Saturday, Manila time) as the Los Angeles Lakers rolled to a 139-106 victory over the Portland Trail Blazers.

According to Sportradar, the oldest player to have a 40-14 game was Larry Bird, who was 35 when he had 49 points and 14 boards for the Boston Celtics in 1992 (which coincidentally also came against the Trail Blazers).

"I don't feel like I have been in the league 19 years. When I am daily reminded of it, I feel it sometimes," James said after his 67th 40-point game of his career and sixth in four seasons with the Lakers. "Sometimes you do have to remind people you can still do what you can do at a high level."

James was 16 of 26 from the field and made five 3-pointers in a game where the Lakers led throughout.

"If that's what our team needs to win, I'm OK with that," said James, who during the last seven games — including Friday — is averaging 36 points and has made 57.8% of his shots from the field. "I'm not a guy who goes out and sees if I can jack up a bunch of shots. The streak I have been on with my scoring I have been efficient. I take pride in that as a player."

His seven-game streak is not an anomaly: He's done it four other times. But this is the first since he was with Miami Heat in February 2013. James' longest stretch is 10 with the Cleveland Cavaliers late in the 2005-06 season.

Los Angeles' largest lead was 35 in the game's final minute.

"This is just LeBron James playing at a superior level more than what is happening around him," Lakers coach Frank Vogel said. "While (Anthony Davis) is out, he is intent on doing everything he can to pile up wins and play at an extra-high level."

Malik Monk scored 18 points, Carmelo Anthony added 16 points and Russell Westbrook (15 points, 13 rebounds, 12 assists) recorded his ninth triple-double this season for the Lakers, who had dropped six of their last seven coming into the game.

Portland's Ben McLemore came off the bench to tie his season-high with 28 points in his first game back after clearing the league's health and safety protocols. Damian Lillard added 18 points for the Trail Blazers, who have dropped four straight and 11 of their last 13.

"I don't think we played with enough force. They dictated the start," said Portland assistant coach Scott Brooks, who is directing the team while head coach Chauncey Billups is in the league's COVID-19 protocols. "They were attacking on both ends of the floor and we were back on our heels. You can't do that against good teams. We gave them too much respect." 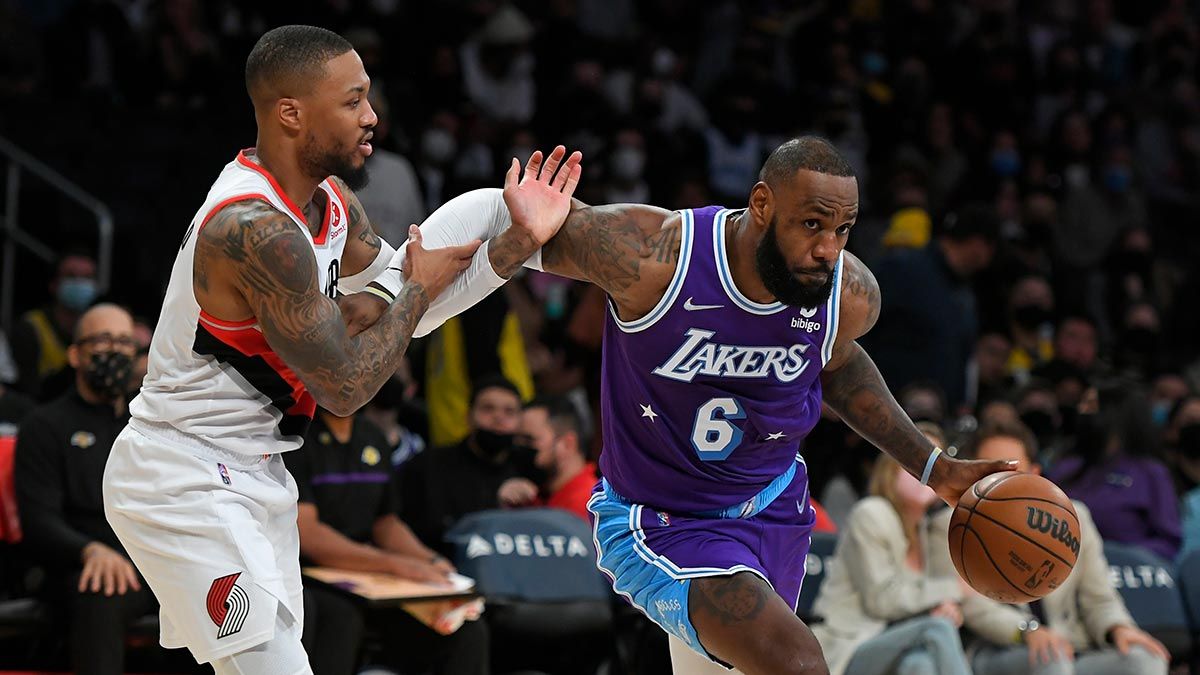 Trail Blazers: Portland had a season-high 21 offensive rebounds. ... McLemore's 16 points in the first quarter were a season-high for a player coming off the bench during the first 12 minutes of a game this season. ... Lillard hit a 3-pointer late in the second quarter to tie Paul Pierce ninth on the all-time NBA list with 2,143.

Lakers: Los Angeles made a season-high 19 3-pointers ... The team's 43 first-quarter points were a season high. ... With his second field goal of the night, Anthony passed Dominique Wilkins for 15th place on the NBA's all-time field goals made list. ... Vogel was back on the Lakers' sideline after missing six games after testing positive for COVID-19.