LOS ANGELES — LeBron James scored 23 of his 32 points in the second half, Malik Monk added a season-high 29 points and the Los Angeles Lakers held off the Atlanta Hawks, 134-118, on Friday night (Saturday, Manila time) for their first four-game winning streak of the season.

Avery Bradley and Talen Horton-Tucker scored 21 points apiece for the Lakers, who have won five of six overall while remaining perfect on a five-game homestand that ends Sunday. With Anthony Davis the only major contributor still absent from their injury-plagued roster, the Lakers had a season-high 37 assists and continued to play their most cohesive basketball in the regular season's first half.

Trae Young had 25 points and 14 assists, and John Collins scored 21 points in his return to the Hawks, who have lost five of seven amid significant coronavirus problems. Atlanta dropped to 2-3 on a six-game trip, its longest of the season.

Coach Nate McMillan is still away from the Hawks under the NBA's health and safety protocols, but starters Collins and Bogdan Bogdanovic returned to uniform after clearing the protocols earlier in the week.

Los Angeles led by 19 early in the fourth quarter, but Atlanta trimmed the margin to 10 before the Lakers closed it out with dramatic dunks from James and Monk, who soared through the lane for a put-back slam with 1:56 to play.

Monk scored 21 points in the first half while hitting eight of his first nine shots in his latest impressive performance for the Lakers, who signed him as a free agent in the offseason. Monk averaged 20.7 points per game in Los Angeles' previous six games starting on Christmas, showing off his quick-release jumper with multiple 3-pointers in every outing.

Young added nine rebounds to another outstanding performance despite a lower back injury that forced him to miss Atlanta's last game in Sacramento after he dropped 56 in Portland on Monday.

Kevin Huerter, who scored 25 points and closed out the Hawks' win in Sacramento two days ago with five late points, hit four 3-pointers and scored 12 of his 16 points in the first half against the Lakers. 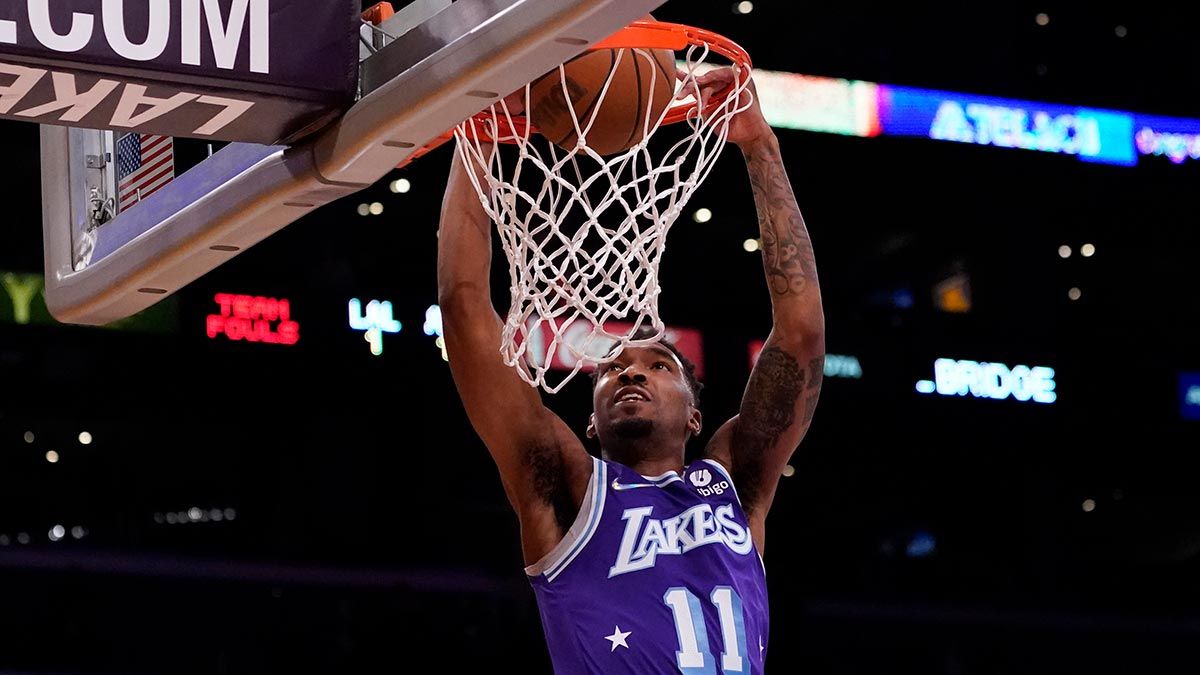 Hawks: Cameron Oliver and Gorgui Dieng remain in the NBA's health and safety protocols along with McMillan. ... Timothé Luwawu-Cabarrot played 23 scoreless minutes in his first game since his contract became guaranteed for the rest of the season.

Lakers: Austin Reaves' contract also became fully guaranteed Friday in an unsurprising decision. The rookie is a regular rotation player off LA's bench. ... James passed Alvin Robertson for 10th place on the NBA's career steals list in the second half.

Bradley scored 16 points in an outstanding first half and hit four 3-pointers in his first game since his contract with the Lakers became guaranteed for the rest of the season.

Los Angeles claimed Bradley in October after their roster had preseason injury problems, and the veteran guard surprisingly became a starter and a dependable contributor in his second stint in LA. Bradley was a contributor to the Lakers' championship team before the coronavirus pause, but he opted out of the playoff bubble and didn't get to win a title.

Hawks: At Clippers on Sunday.