EL SEGUNDO, California — LeBron James has heard the basketball world talking about how the Los Angeles Lakers are too old, and he is laughing — both literally and figuratively.

"Some of the memes and some of the jokes have been extremely funny," James said with a grin on Tuesday (Wednesday, Manila time).

At 36 years old, James is on a roster of his peers as he enters his 19th NBA season. Nine of the Lakers' 14 current players are 32 or older, including eight of their 11 new additions — and Anthony Davis is a high-mileage 28. Depending on any late moves, the Lakers' average age is likely to be nearly 31, which would be two years older than any other NBA roster.

But instead of fixating on his new teammates' 1980s birthdates, James thinks people should be focusing on the skill, experience and athleticism represented by all those numbers. Russell Westbrook, Carmelo Anthony and a supporting cast of accomplished NBA veterans are teaming up with James and Davis, and they are confident they can prove age is not yet a hindrance to their incredible talent.

"We come out and we put the time in, we put the work in," James said. "We make our own narrative. One thing that we know (is) who we are. We've got a bunch of guys that have been in this league quite a while that understand and know what it takes to win. The business that we're in is winning, and doing it all the time."

The rest of James' new teammates react to the questions around their ages with the same raised eyebrows. The Lakers all seem to wonder why the skeptics don't realize these players have outlasted dozens of younger players in the NBA for some very good reasons.

"It's never bulletin-board material, because it's somebody else's narrative," said Anthony, James' fellow member of the draft class of 2003. "We don't get moments like this often where you have a group of guys with this stature on one team who all like each other. That's hard to find."

The Lakers got together Tuesday at their training complex for media day exactly three weeks before their regular-season opener against Golden State at Staples Center.

With just three players returning from last season's team, the Lakers realize they have work to do, and they've already begun their bonding with a recent weekend trip to Las Vegas. They hope to find a groove swiftly with a roster also including newcomers DeAndre Jordan, Rajon Rondo, Kent Bazemore, Trevor Ariza and three-time Lakers center Dwight Howard — along with youngsters Malik Monk and Kendrick Nunn.

James isn't worried about finding a rhythm with Westbrook, the ball-dominating Los Angeles native landed by the Lakers in a blockbuster trade with Washington after averaging a triple-double yet again last season. The third-leading scorer in NBA history cited his years of experience in playing alongside gifted teammates ranging from Dwyane Wade and Chris Bosh to Kyrie Irving and Kevin Love.

"I'm very cerebral about what I need to do in order for our team to be as great as we can be, and also to (complement) what Russ brings to the table," James said. "I always figure it out. I don't think it's going to be like peanut butter and jelly to start the season, but that's all part of the process and all part of my work. I like to actually put in the work to get to how great it can be." 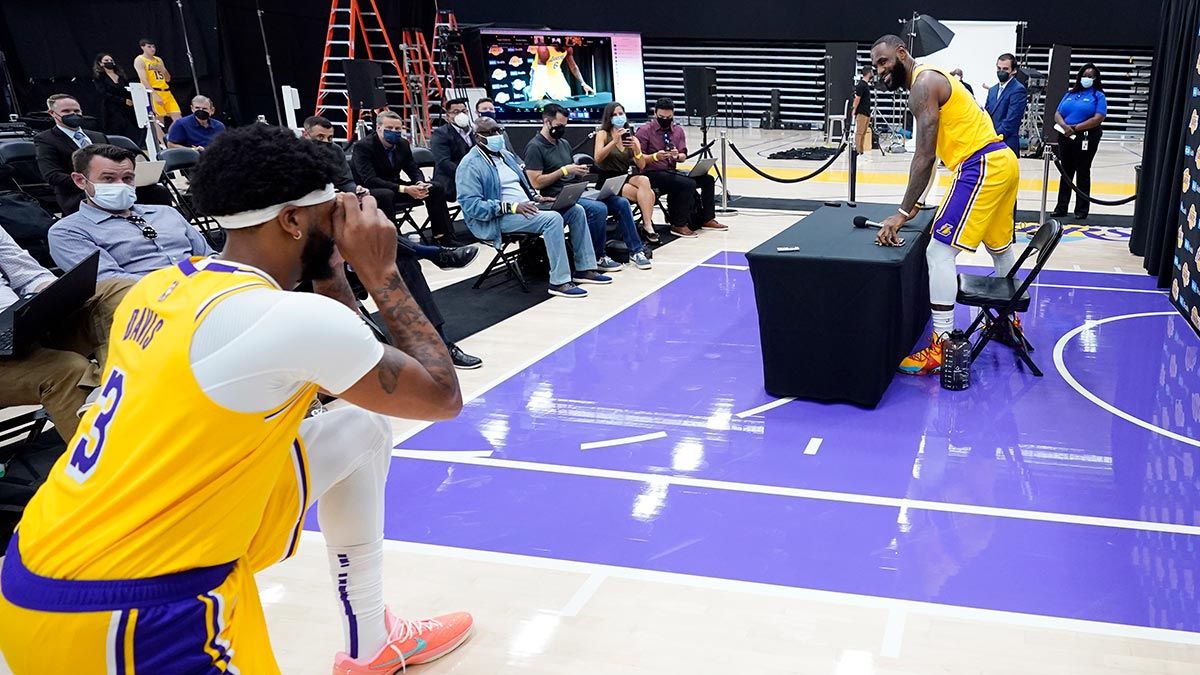 LeBron James has his picture taken by Anthony Davis on Lakers media day.

The Lakers have also taken a major step toward togetherness and health by getting their roster fully vaccinated against COVID-19. Even Bazemore, an outspoken vaccine skeptic last season in Golden State, has received his first dose and is eager to get his second.

Bazemore said he decided to get the vaccine after a conversation about life and philosophy with Lakers general manager Rob Pelinka.

James also confirmed he has been vaccinated, putting to rest the rumors around his previous reluctance to disclose his status. He acknowledged initial "skepticism" about the vaccine, but decided it was the right decision to stay healthy for his teammates and family.

Davis' absences have been the most crushing for the Lakers over the past two years, and the big man is eager to be more durable. As one of the Lakers' youngsters heading into only his ninth NBA season, he sees it as a responsibility.

"I didn't feel comfortable missing that many games," Davis said. "Not being able to play at full strength in the playoffs against Phoenix ... that didn't sit well with me. I made an emphasis on taking care of my body, getting my body back to what it was strength-wise my first year here."