They knocked it off with time to spare.

Anthony Davis scored 34 points, James had the go-ahead basket with 12.8 seconds left and the Lakers moved closer to clinching the No. 1 seed in the Western Conference playoffs by topping the Los Angeles Clippers 103-101 on Thursday night (Friday, Manila time) in the second game of the NBA’s re-opening doubleheader.

James had 16 points, 11 rebounds and seven assists to help the Lakers move 6 1/2 games ahead of the Clippers in the West with seven games remaining. Kyle Kuzma added 16 points.

Paul George had 30 points and Kawhi Leonard scored 28 for the Clippers, who had an 11-point lead midway through the third in a game with deep ebbs and flows. The Clippers got that lead after a 26-5 run; the Lakers immediately rebutted with a 36-14 run to reclaim control.

And it still came down to the final moments.

George’s 3-pointer with 1:50 left cut the Lakers’ lead to 99-98. James muscled his way to a layup on the next possession, and then George hit another 3 to tie the game at 101 with 29 seconds remaining.

James followed his own miss down the lane for the go-ahead basket, then was brilliant on the last defensive possession — forcing the ball out of Leonard’s hands and covering George as his 3-point try at the buzzer misfired.

Thursday marked the NBA’s first game action that counted in 141 days, the league finally getting back to work after the coronavirus pandemic forced a shutdown. 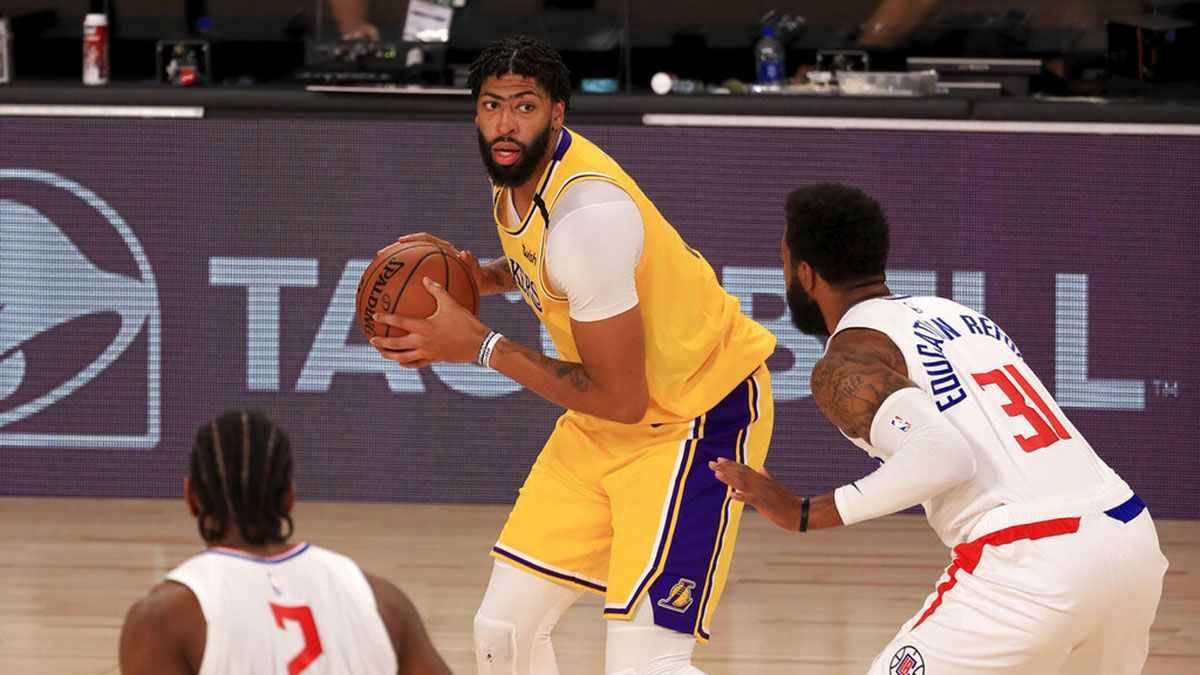 During the pandemic, a renewed discussion about racial injustice happened in this country — the conversation that surrounds this NBA restart. The courts have “Black Lives Matter” painted on them, and the Lakers and Clippers knelt together during the national anthem in a silent protest to demand equality. New Orleans and Utah did the same in the night’s opener.

James — who is going to win the NBA’s assist title for the first time — had five in the first quarter to get teammates going, and then his first basket of the restart came on a dunk early in the second quarter to put the Lakers up 37-24.

But for a stretch that basically spanned a full quarter, from midway through the second until about the midpoint of the third, the Lakers couldn’t make a shot. They went 1 for 10 to end the half, then 0 for 9 to start the third and the Clippers took advantage.

Clippers: The Clippers had won 11 of their last 12 games in the state of Florida. In both of those losses, Dion Waiters played for the winning side — the first being a game in Miami. ... Leonard was charged with two offensive fouls in the first quarter, the first time in his career that happened.

Lakers: The Lakers got to the 50-win mark for the 33rd time in franchise history, and this is the 12th time that James has helped a team get to that many wins in his 17 seasons. ... James’ 3-pointer with 8:30 left extended his NBA record of consecutive regular-season games with at least 10 points to 989.

NBA players are permitted to attend games in the bubble as fans — with their seats 6 feet apart to satisfy social distancing rules. Among those who attended: Portland’s Damian Lillard and C.J. McCollum, San Antonio’s DeMar DeRozan and Toronto’s Kyle Lowry.