KYRIE Irving and the Nets are expecting more of the same from Boston — on and off the court — in Wednesday's Game Two (Thursday, Manila time) when the Celtics look to build on their buzzer-beating win in the series opener.

Jayson Tatum's spinning layup in the lane over Irving as time expired sent the TD Garden crowd into a frenzy as Tatum's final buck capped a 31-point performance that punctuated Boston's victory.

It came on a night in which some of those same fans seemed to get under Irving's skin — or at the very least knew they had his attention.

An evening of relentless boos and jeers from the Celtic faithful was enough for Irving to flash his middle finger and hurl profane language back at them. It earned him a $50,000 fine (around P2.6 million) from the league on Tuesday.

Irving, who had a game-high 39 points, defended his actions afterward saying fans crossed the line with obscenities directed at him. Teammate Kevin Durant said Tuesday that the team has no issue with how Irving reacted.

"Kyrie's reaction was his reaction. We all stood behind that. I feel him — exactly what he said," Durant said. "The same energy they're giving off to him he's gonna give it right back. He played that way. I think it's all in the game. They come for their experience of watching the game and might have to get something back from one of the players if you say something. That's just the nature of the beast now."

It overshadowed a game in which Boston was able contain both Irving and Durant for most of the showdown.

One of the architects of that pressure, point guard Marcus Smart, was named defensive player of the year on Monday

Boston coach Ime Udoka said Smart getting the award feels like an honor for the entire team, which entered the postseason with the NBA's top defensive rating.

"It's a great honor for us," Udoka said. "I think everyone relishes the fact that he's being recognized for what he's done his whole career and the team is, obviously, No. 1 which reflects well on him." 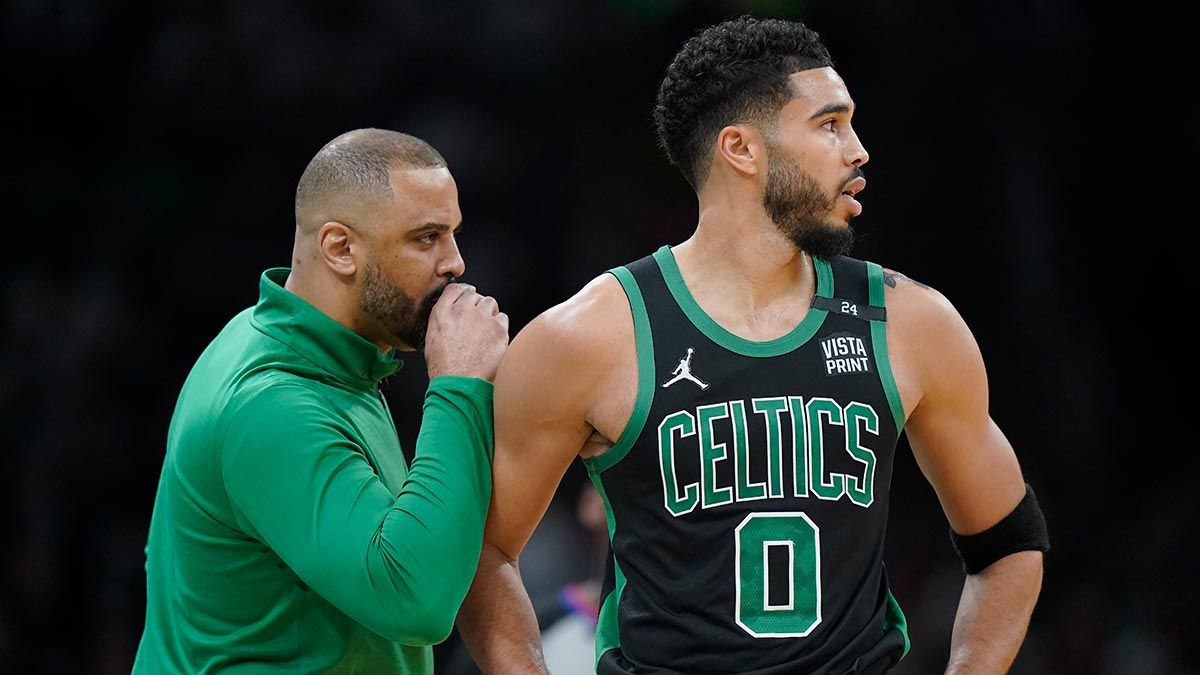 Ime Udoka, Jayson Tatum and the Celtics eye a 2-0 lead.

Here is a look at Wednesday night's games:

NEED TO KNOW: The Celtics pulled out a 115-114 win on Tatum's buzzer-beating layup. It helped Boston survive after surrendering a 15-point lead in the second half. Boston played great defense, but Irving got loose late, scoring 18 points in the fourth quarter.

KEEP AN EYE ON: The crowd and its effect on Irving, who nearly had the last word in Game 1. But his comments after the series opener will almost certainly ratchet up the level of disdain he hears from Celtics fans going forward.

INJURY WATCH: Nets point guard Ben Simmons is continuing to go through more basketball-related activity as he recovers from the back issues that have delayed his debut since being traded from Philadelphia. But there's still no clarity on when, or if, he will play in this series. Coach Steve Nash said Monday was his first day of going through some contact drills with teammates. "He's making progress, but there's no real update," Nash said. "We'll just see how he responds and see if he's able to do more contact tomorrow."

PRESSURE IS ON: Durant. Boston showed the All-Star various looks in Game 1, contributing to him shooting just 9 of 24 from the field, with four turnovers. He managed 23 points, but he will have to be more efficient if the Nets hope to even the series.

NEED TO KNOW: The Bucks have won 17 of their last 18 matchups with the Bulls, including a 93-86 Game 1 victory on Sunday. Giannis Antetokounmpo had 27 points – but none in the fourth quarter – and 16 rebounds as the Bucks won the opening game despite blowing an early 16-point lead. The Bucks didn't pull ahead for good until 5:03 remained in the game. The Bulls posted the lowest single-game point total of any Bucks opponent all season, shot a season-low 32.3% and went 7 of 37 from 3-point range. The Bucks won despite committing 21 turnovers.

KEEP AN EYE ON: Bucks forward Khris Middleton. His career playoff production has been up and down, but the three-time All-Star was dominant at times during the Bucks' 2021 title run. After shooting 4 of 13 and committing seven turnovers in Game 1, Middleton is due for a bounce-back performance.

PRESSURE IS ON: Chicago's DeMar DeRozan, Zach LaVine and Nikola Vucevic. The Bulls' top three players combined for 60 points but shot 29.6% (21 of 71) in Game 1. They were a combined 4 of 22 on 3-point attempts., with LaVine and Vucevic each going 2 of 10 from beyond the arc. They must shoot better. DeRozan vows that they will. "I guarantee you that me, Zach and Vooch aren't going to miss that many shots again," DeRozan said after Game 1.

NEED TO KNOW: Raptors coach Nick Nurse has worked the officials all series, trying to get them to call more fouls on the 76ers. So far, Joel Embiid has taken advantage of his time at the free-throw line. He made 12 of 14 free throws in Game 2. The Raptors only made 10 of 12 as a team. The Sixers took a total of 30 free throws in Game 2.

KEEP AN EYE ON: Off the court, will 76ers super fan Meek Mill reignite his beef with Drake? On the court, the 76ers have gotten quiet production from Tobias Harris. Embiid and Tyrese Maxey stole the show the first two games. But Harris has 46 points and 16 rebounds through two games and steadied the Sixers with big shots when the Raptors seemed close to making a run. He also had a playoff career-high three blocks in Game 2. "I'm in a great rhythm, great groove right now," he said.

INJURY WATCH: The Raptors are banged-up. Raptors forward Scottie Barnes sat out Game 2 with a sprained left ankle and needed a walking boot. Gary Trent Jr. has a non-COVID illness and did not play in the second half. The Sixers will play the next two games without defensive ace Matisse Thybulle. Thybulle is barred from entering Canada because he is not fully vaccinated.

PRESSURE IS ON: Toronto. Yes, the Raptors are headed home. But the 76ers have won 18 of 19 playoff series in franchise history when up 2-0.