LAKE BUENA VISTA, Fla. — The Toronto Raptors were a half-second away from falling into the abyss that no NBA team has ever escaped. Down by two points, down by two games, the reigning champions needed a miracle.

Anunoby caught a cross-court pass that Kyle Lowry threaded over everybody else on the floor and hit a 3-pointer as time expired, giving the Raptors a 104-103 win over the Boston Celtics in Game 3 of their Eastern Conference semifinal series Thursday night (Friday, Manila time).

The Celtics still lead the series 2-1. But it's not 3-0 — and that means the Raptors still have realistic hope. The Raptors mobbed Anunoby after the shot, reveling in the moment.

The Celtics took a two-point lead when Kemba Walker found Daniel Theis for a dunk with a half-second left.

No team in NBA history has rallied from a 3-0 series deficit. The Raptors won't have to try it now; Lowry elected to audible and throw the long pass — threading it over Boston's 7-foot-5 Tacko Fall, who was put in specifically to disrupt the inbounds play — to Anunoby. 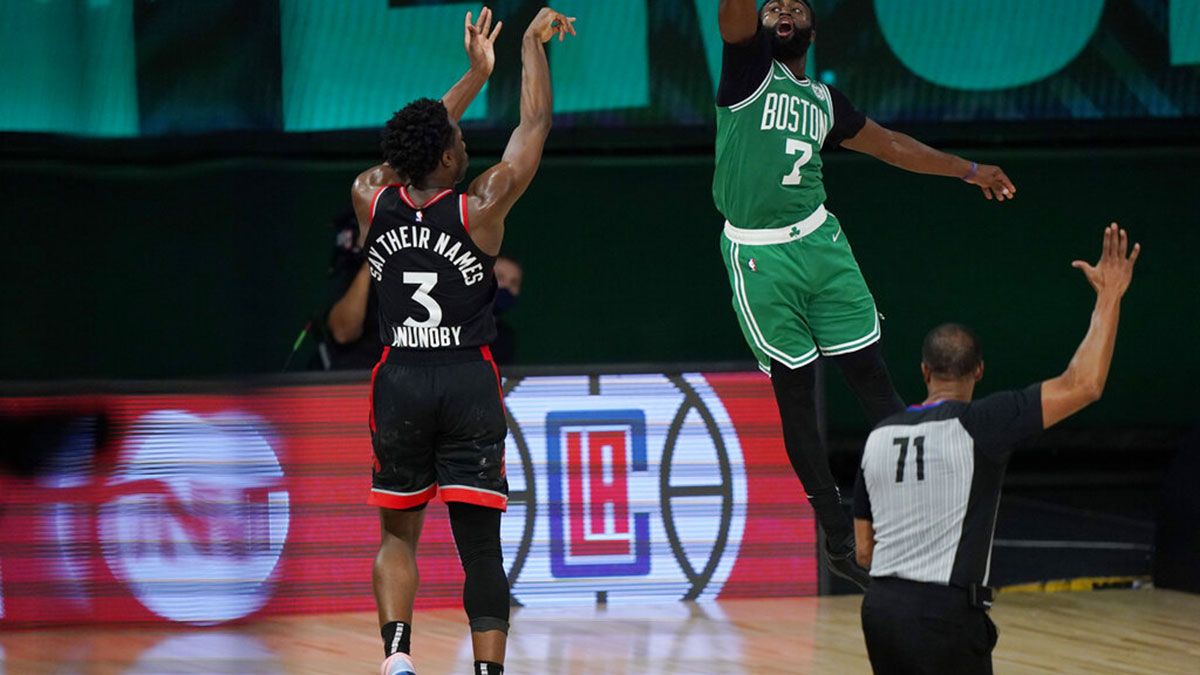 Walker scored 29 points for Boston, which lost for the first time in seven playoff games. Jaylen Brown had 19 points and 12 rebounds and Jayson Tatum finished with 15 points, nine rebounds and six assists for the Celtics.

"It hurts and stings to lose," Celtics coach Brad Stevens said. "But we'll just get back to it and get ready for Saturday."

Marc Gasol made a layup with 5:57 left for a four-point lead; the Celtics responded with the next eight points, going up 99-95 on a dunk by Brown with 3:02 remaining.

Lowry got a pair of layups, both drawing Toronto within two. The Raptors had the ball with a chance to tie or take the lead in the final half-minute, VanVleet getting an acrobatic layup to drop with 21.5 seconds left and knotting it at 101.

"Much credit to those guys," Walker said. "That was a hell of a shot."

Toronto was clawing uphill most of the night. The Raptors were outscored 19-10 to close the half, a run that gave Boston a 57-47 lead at the break. Walker had 17 points in the first quarter, capping that period with a 3-pointer — and did it again to end the second to give Boston what was its biggest lead.

Lowry had been 0 for 5 from 3-point range in the game — and 1 for 17 in the series — before connecting from the left corner midway through the third, getting the Raptors to 61-60. Toronto would eventually lead by as many as four in the third, but Boston reclaimed the lead and took an 80-76 edge into the fourth.

In the final moment, the Raptors found a way.

"I'm not sure that that doesn't rank with our gutsiest performances," Nurse said.

Raptors: Lowry sat for a 1:31 stretch of the first quarter. He returned late in that period and played the final 37 minutes, 29 seconds. ... Nurse tied Dwane Casey for the franchise postseason wins lead, with 21.

Celtics: Walker's 17 first-quarter points were a career-best for any postseason quarter. He had 14 for Charlotte in the fourth quarter against Miami on April 29, 2016. ... Robert Williams's first shot attempt of the night was blocked by Serge Ibaka with 8:19 left in the first half, significant because Williams had been 10 for 10 in the series to that point.

It was the fifth consecutive playoff game to go to the final second. Tuesday saw Boston win when VanVleet missed a 3-pointer for the tie at the buzzer, followed by Mike Conley missing as time expired in Denver's Game 7 win over Utah. On Wednesday, Jimmy Butler hit a game-ending free throw in Miami's win over Milwaukee and Houston denied Oklahoma City on the last play of their Game 7. And Thursday was Anunoby's turn.

Nurse is friends with new Brooklyn Nets coach Steve Nash and had talked to him quite a bit of late — but Nash didn't reveal that he was in the mix for the job. "Caught me off guard, that's for sure," Nurse said. "He kept all that to himself, close to his chest. ... He'll be great, man. He's one of the greatest players ever." Nash's hiring was announced Thursday morning. He's the second Canadian to become an NBA head coach, joining Jay Triano.