NEW YORK — Julius Randle scored 35 points, Evan Fournier made the go-ahead 3-pointer in the second overtime and added 32 against his former team, and the New York Knicks outlasted Jaylen Brown and the Boston Celtics, 138-134, on Wednesday night (Thursday, Manila time).

Brown scored a career-high 46 points after overcoming a bout of COVID-19 and Jayson Tatum had the biggest basket of his awful opener with a three-point play that gave Boston a 134-133 lead with 1:05 remaining.

Fournier then hit his fourth 3-pointer of the overtimes with 56 seconds to go and Derrick Rose finished it off with a basket with 22 seconds to play as the Knicks finally put away a game they seemed to have won much earlier.

The Celtics put together a push late in regulation of their first game under coach Ime Udoka and Marcus Smart tied it with a 3-pointer at the buzzer.

RJ Barrett scored all of his 19 points after halftime and Obi Toppin added a career-best 14 for the Knicks. Kemba Walker had 10 points and eight assists against his previous team.

Tatum had 20 points and 11 rebounds, but was 7 for 30 from the field, including 2 for 15 from 3-point range. The U.S. Olympic gold medalist missed badly on a jumper that could have won it at the end of the first overtime.

The Knicks showed off more offensive punch than last season's team that finished 41-31 in its first season under Coach of the Year Tom Thibodeau, making the playoffs for the first time since 2013. That was largely behind the all-around play of Randle, the runaway winner of the Most Improved Player award, and a defense that led the league in fewest points and lowest shooting percentage allowed.

They put six players in double figures Tuesday, but it was the defense that let them down on the final possession of regulation, allowing the Celtics to race up the floor after Randle's two free throws with 4.8 seconds remaining. Smart was wide open near the sideline to tie it.

Fournier made three 3s in the first 1:20 of OT but the Celtics kept answering, with Tatum's 3 knotting it at 128 with 2:58 to play. Perhaps out of gas, neither team scored again until the second OT.

Brown tested positive on Oct. 8 and played in only one preseason game. He said he had minor symptoms but got in two good days of workouts leading into the game and determined he was ready to play after the morning shootaround, with the Celtics ready to play him in short stints if necessary. 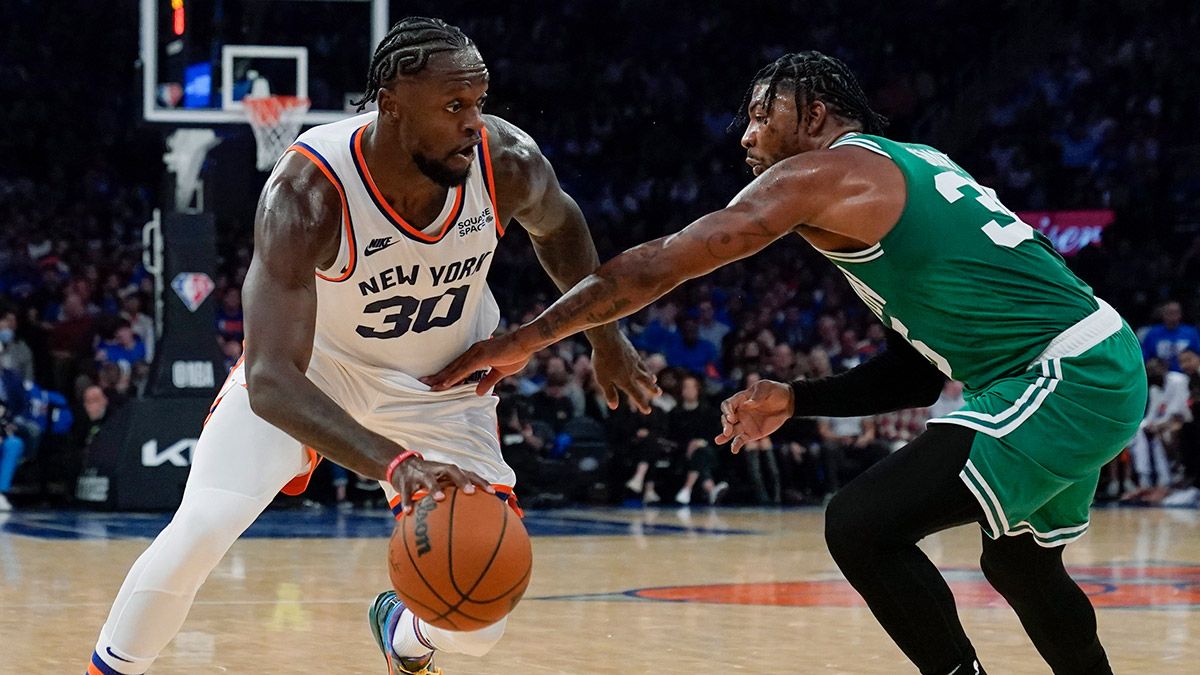 Nothing ended up short on this night.

Randle hit two 3-pointers during an 8-0 start that kept the loud cheers from the pregame festivities booming into the early minutes of action. But Brown scored 20 points in under 8 1/2 minutes as the Celtics went ahead 35-29 after one.

They remained ahead 58-54 at halftime despite Tatum shooting 3 for 10.

Celtics: Boston was without F Al Horford, who is back for a second stint with the organization, because of health and safety protocols. ... G Josh Richardson was out with a migraine. Udoka said it developed after the morning shootaround and worsened at the team hotel.

Thibodeau, a Celtics assistant when they won the 2008 NBA championship, said he got to know Udoka a bit through USA Basketball and visiting the San Antonio Spurs, where the replacement for Brad Stevens in Boston was an assistant to Gregg Popovich. Stevens is now the Celtics' president.

"Obviously being the head coach of the Celtics is a great responsibility. I think he's prepared himself extremely well with the people he's worked for, the coaches that he played for, all his experiences," Thibodeau said. "He's got a terrific staff, he's got Brad to lean on there too as well so I have great respect for him and that organization."

Knicks: Visit Orlando on Friday in the opener of a home-and-home series.