NEW YORK — Julius Randle capped his All-Star first half with 27 points, 16 rebounds, and seven assists, sending the New York Knicks into the break with a winning record after a 114-104 victory over the Detroit Pistons on Thursday night (Friday, Manila time).

RJ Barrett added 21 points to help the Knicks improve to 19-18 in their first season under Tom Thibodeau. They have missed the playoffs for seven straight years but finished the first half in fifth place in the Eastern Conference.

Elfrid Payton had 20 points after missing the last four games with a sore right hamstring. 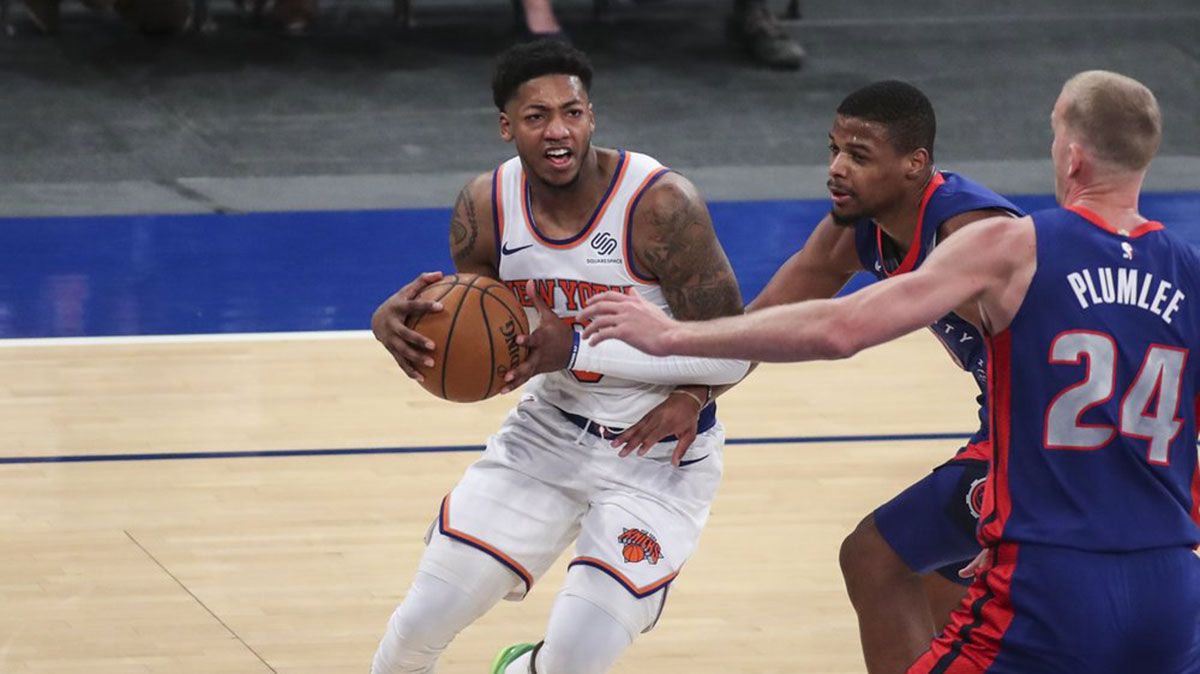 Elfrid Payton drives to the basket against the Pistons defense.

Wayne Ellington scored 17 points for the Pistons, who came nowhere near duplicating their play from a night earlier, when they routed Toronto 129-105. They had 43 points after one quarter in that game but barely surpassed that by halftime of this one, reaching the midpoint of their schedule at 10-27, worst in the East.

Mason Plumlee, one of two Pistons with triple-doubles against Toronto, followed that with 12 points and 13 rebounds.

New York's lead was 48-44 after Isaiah Stewart's follow shot with 3:52 remaining in the half. The Knicks then ran off 11 straight points, most of the baskets at or near the rim, to open a 15-point cushion and took a 59-46 lead to the break.

The Knicks made 15-of-23 shots (65%) in the third, opening a 20-point lead before taking a 93-74 advantage to the fourth. Detroit cut it to 10 in the fourth and was about to get closer when it got the ball underneath to an open Plumlee, but Randle swooped in to block the shot and the Knicks found Barrett alone on the other end to make it 103-91.

The Pistons were the opponent in the last NBA game played at Madison Square Garden in front of a full crowd. The Knicks beat them 96-84 last March 8 before beginning a three-game road trip they never finished because the season was suspended three nights later because of the coronavirus.

Knicks: Derrick Rose missed his second straight game for health and safety protocol reasons. ... The Knicks showed highlights of some dunks by Obi Toppin on the overhead video screen during a timeout late in the first quarter and congratulated him on being chosen to compete in the All-Star slam dunk contest. They also wished a happy birthday to the rookie, who turned 23 Thursday.

The Pistons closed the first half with a back-to-back, when originally they weren't scheduled to play either night. Detroit was supposed to close its first half Tuesday with a road game against Toronto, before that game was pushed back a day because of the Raptors' coronavirus issues. The game Thursday in New York was originally targeted for the second half before the NBA recently added it to Thursday's schedule.

Pistons: At Charlotte on March 11.