NEW YORK — Julius Randle had 34 points and 10 rebounds against his former team and the New York Knicks beat the Los Angeles Lakers 111-96 on Monday night (Tuesday, Manila time) for their third straight victory.

Coming off tense finishes against Memphis and Toronto, the Knicks led comfortably for much of the fourth quarter and moved back above .500 at 28-27.

Elfrid Payton scored 20 points and Derrick Rose added 14 off the bench for the Knicks, who had plenty of energy on the second night of back-to-back games.

Dennis Schroder scored 21 points and Markieff Morris had 17 for the Lakers, who fell to 5-7 since LeBron James sprained his ankle March 20, joining fellow All-Star Anthony Davis on the sideline.

Even without them, the Lakers routed Brooklyn 126-101 on Saturday, tying their season high with 19 3-pointers. But in the same city, they found a Knicks team that plays a much different game than the Nets.

Bigger up front and much better defensively, the Knicks outrebounded the Lakers 47-33. Andre Drummond, who had 20 points and 11 rebounds against the Nets, took only three shots and had three points and 10 boards. 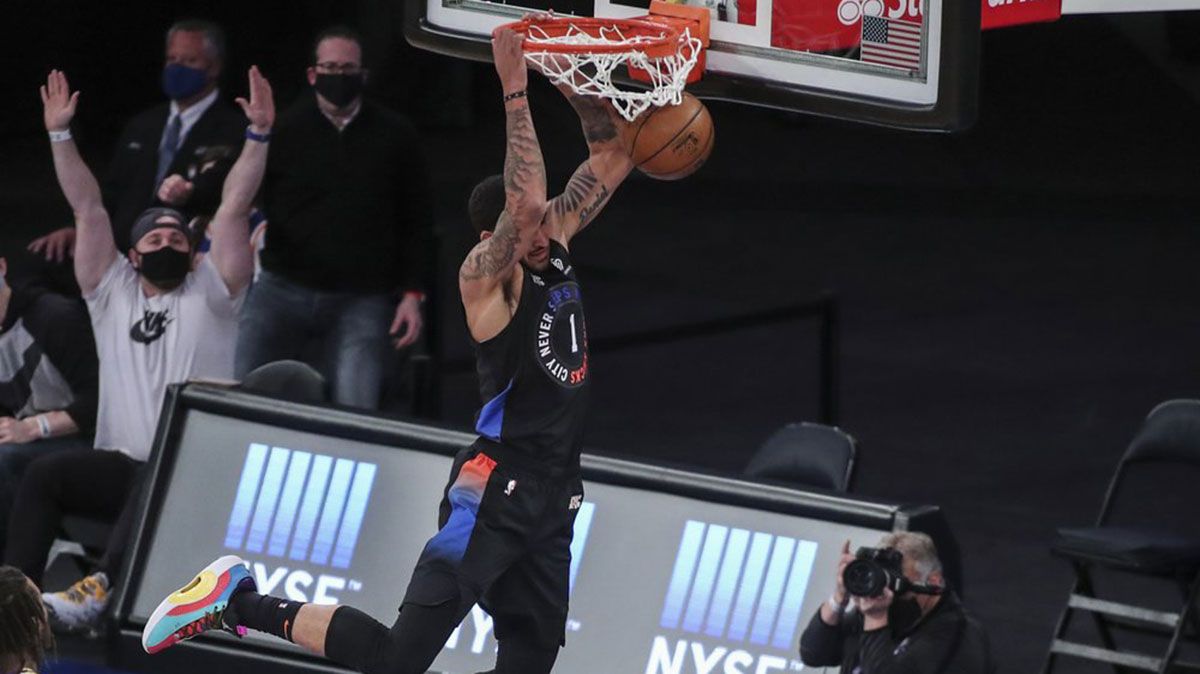 Knicks rookie Obi Toppin finds himself open for a slam.

The Lakers were at least healthier in this one, getting Kyle Kuzma back after he missed two games with a left calf strain. Wesley Matthews and Marc Gasol also played after sitting out in Brooklyn with injuries.

It didn't matter and the Lakers fell to 3-3 on their road trip that ends Tuesday in Charlotte.

The Lakers ran off 10 straight points midway through the fourth to get within 92-87, but Payton scored before Randle converted a three-point play to push it back to double figures. He followed with another basket and then a free throw as the lead grew to 100-87.

Lakers: Morris rolled his left ankle in the first quarter and left to have it re-taped before returning. ... Alfonzo McKinnie was out because of health and safety protocols.

Knicks: RJ Barrett missed his first eight shots and finished with seven points on 2-for-11 shooting. ... The Knicks signed F/C Norvel Pelle to a second 10-day contract on Monday.

Between their injuries and Schroder's ejection, the Lakers were down to eight rotation players available during the second half of their victory Saturday. Eight is the minimum number to begin a game, but coach Frank Vogel said he wasn't worried about the Lakers facing that problem.

"We got down to eight the other night just because we had a player get ejected," Vogel said. "But typically, when it seemed like we were extremely depleted we still had nine guys and I'm not going to worry about that getting any lower until it happens."