Kings complete season series sweep of Mavs as Carlisle, Doncic get sent off

by schuyler dixon, ap
5 days ago

It remains to be seen how that will affect the playoff positioning for the Mavericks, who now have to worry about their superstar being one technical foul from a one-game suspension after his 15th of the season.

All three games were in a span of 15 days, which Dallas finished with a 6-0 record against the other teams while going 0-3 for the second time in three seasons against the Kings.

Doncic scored 30 points before getting ejected in the final minute after his second technical foul in another game without European sidekick Kristaps Porzingis, who is battling right knee soreness.

Coach Rick Carlisle also got two techs in tandem with his 22-year-old star, the first pair coming in the second quarter before the second batch — and the ejection of both — with 31 seconds remaining.

"I set a poor example tonight by getting two myself," Carlisle said. "That's on me. I apologized to the team after the game for it, too. It's not the right example."

Doncic actually has the 16 techs required for an automatic one-game suspension, but one against New York on April 2 was rescinded. Doncic questioned why he got the second technical for throwing the ball at the basket going into a timeout, and the team could petition for another to get rescinded.

A one-game ban for Doncic with eight remaining could be significant with the Mavericks battling the Los Angeles Lakers and Portland for the 5-6-7 spots in the Western Conference playoffs. The No. 7 seed will be forced into the play-in tournament.

Dallas and Portland are tied, a half-game behind the Lakers, who played later Sunday.

"We've got to move on," Carlisle said.

But the Kings, 12th in the Western Conference and with little hope of reaching the 10th seed that would get them into the play-in tournament, were short-handed, too.

Rookie Tyrese Halliburton was forced to leave in the third quarter with a left knee injury, with the Kings already missing two other starters in De'Aaron Fox (COVID-19 protocols) and Harrison Barnes (left thigh injury).

Halliburton dribbled behind his back near midcourt before going down suddenly. Several players from both teams surrounded him, and he was initially helped off the court before limping the rest of the way to the locker room on his own.

The Kings never trailed in the two games in Dallas, taking an 8-0 lead both times, then staying in front after the Mavericks got even multiple times in the second quarter.

Sacramento won the first game in Dallas 121-107 and trailed for just 42 seconds in a 113-106 win at home before blitzing the Mavericks again. The Kings were coming off an uplifting win at the Lakers in LeBron James' return from an ankle injury, while Dallas was finishing a back-to-back with its fifth game in seven days.

"All three of the games came during a stretch when we were playing pretty well from the standpoint of togetherness and rebounding and our defense was solid tonight," Kings coach Luke Walton said. "It takes that type of effort to give yourself a chance to win."

Bagley returned to the startling lineup in his second game back after missing 23 with a broken left hand. While Walton said he was still on a minutes restriction, he played 34 while going 10 of 16 from the field. 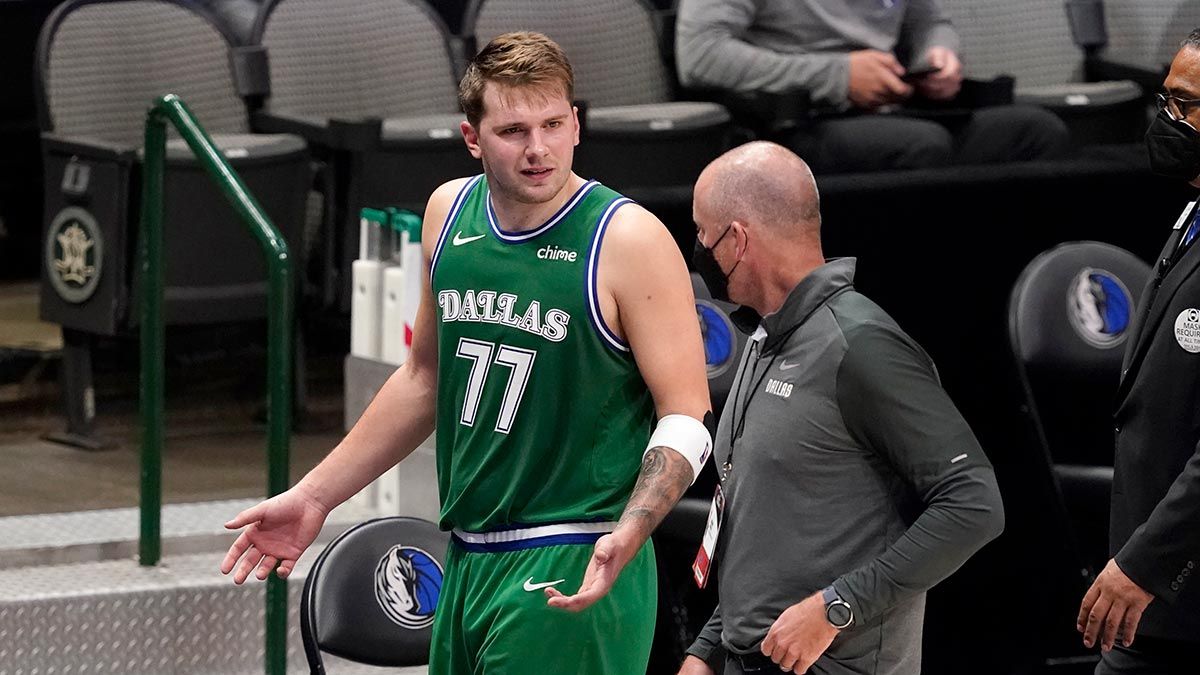 Kings: Two games removed from his first career start, F Chimezie Metu was out with lower back soreness. He missed 16 games earlier in the season because of a broken right wrist. ... Richaun Holmes scored 17 points, and former Dallas player Delon Wright had 14, including two big buckets to help help Sacramento in front in the fourth quarter.

Mavericks: Jalen Brunson scored 17 points, Dwight Powell had 13 and Josh Richardson 11. ... Porzingis was out for the fifth time in six games. He had to leave early in the only game he did play because of the right knee that was surgically repaired in the offseason. The 7-foot-3 Latvian missed the first nine games coming off that procedure.

The Mavericks were within six in the final two minutes when Hield just beat the shot clock with a 3-pointer for a 106-97 lead. Hield was 6 of 10 from deep while the Kings went 11 of 28 as a team compared to 17% (6 of 35) for Dallas, which shot 36% overall in the second half against the NBA's worst team in field goal percentage defense.

Kings: The third game on a four-game trip is Tuesday in Oklahoma City. It's the first of three games between the teams in a span of eight days.

Mavericks: Dallas goes to Miami on Tuesday looking for a season sweep of the Heat, who had won both games in the previous three seasons.