SAN FRANCISCO — Their coach sidelined again as has happened several times before, even during the playoffs, Stephen Curry took charge and led the Golden State Warriors back.

Mike Brown grabbed the clipboard as acting head coach, just like he did during a title run five years ago with Steve Kerr out.

Curry converted eight free throws over the final 45.7 seconds on the way to 32 points, leading the Warriors to a 101-98 victory over the Memphis Grizzlies on Monday night (Tuesday, Manila time) and a 3-1 lead in the Western Conference semifinals.

Curry also dished out eight assists as Golden State rallied to win without Kerr after he tested positive for COVID-19 less than two hours before tipoff.

"Obviously there's butterflies, because again you're going into the game with a certain mindset and it's a big game. Every game that we play at this point in the year, it's huge," said Brown, who agreed on Sunday to become the Sacramento Kings new coach after this postseason run.

"So to have that kind of thrown at you, you've got to switch gears because I know what my responsibilities are going in as Mike Brown the assistant coach, and it changes."

But Brown has done this previously. He led the Warriors to an 11-0 record during the 2017 title run when Kerr was out dealing with debilitating symptoms from complications of back surgery two years earlier.

"His head coaching record for a Warrior playoff game I think is undefeated," Klay Thompson said. "We did miss Steve a lot, just his voice, his presence, but we've been here before, 2017 when Mike took over and we rolled off a lot of wins, so I reflected on that a lot."

Curry took charge and now his Warriors are one win from a trip to the Western Conference finals for the first time since 2019. He tied it at 90 on a fall-away baseline jumper with 3:25 to go and his two free throws with 45.7 seconds to go gave the Warriors a 94-93 lead, their first of the night.

Golden State scored 39 points in the fourth, topping its 38 the entire first half.

"Nothing we figured out, it was just don't let the first three quarters influence the fact that we still had a chance to win the game," Curry said. "Shoot the shots you think you can make, play aggressive, take care of the ball. We did all of those things."

Andrew Wiggins had 17 points and 10 rebounds and Thompson scored 14 points despite missing all seven of his 3-point attempts for the cold-shooting Warriors, who didn't have to contend with do-everything Morant this time. The Grizzlies guard missed the game with soreness in his right knee after Jordan Poole grabbed him while going for a loose ball late in Game Three — leading Morant and Memphis coach Taylor Jenkins to question Poole's intentions.

It remained unclear whether Morant would be back for Game Five on Wednesday in Memphis.

Brooks sat out Game Three as a penalty by the league for his Flagrant 2 foul that injured Gary Payton II in Game Two, when Brooks hit the Golden State guard over the head on a driving layup attempt and Payton fell hard and broke his left elbow. Kerr called it a "dirty" play and said Brooks had broken an NBA code of conduct.

Brooks was booed nearly every time he touched the ball, fouled or when he checked back into the game.

"He forced a couple. Trying to get his groove back," Jenkins said. "Obviously he's been off for a couple of days. But when he was playing with force under control, I loved the playmaking that he had."

Golden State trailed 69-62 going into the fourth quarter after Desmond Bane's 32-foot 3-pointer beat the third-quarter buzzer. However, both teams struggled all night to make their 3s.

Poole scored 14 off the bench for the Warriors as they survived a nail-biter following a postseason-record point total in Saturday's 142-112 Game 3 blowout. 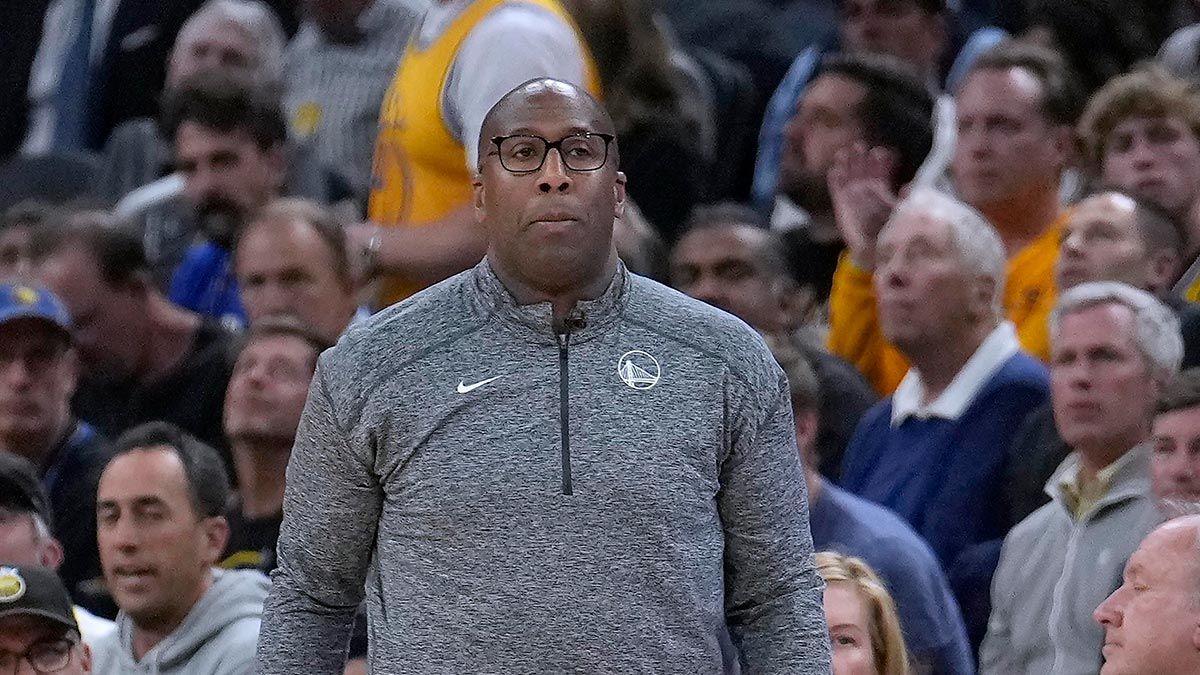 Mike Brown steers the Warriors to a crucial win over the Grizzlies.

Green's former Michigan State teammate Adreian Payne was killed in a Florida shooting earlier in the day. Green didn't discuss the game but committed $100,000 to form a fund in Payne's honor.

"It was an emotional day," Thompson said. "Prayers up to Adreian's family and Draymond, I know they played together. It's just a terrible loss of life. His legacy will live on, it's just a sad day."

Curry will autograph the shoes for auction on Wednesday on the NBA auction website with all proceeds going to the SagerStrong Foundation. The two-time MVP changed to lavender-colored shoes during the second half.

Grizzlies: C Steven Adams, who returned from the health and safety protocols to play six minutes in the waning moments of Saturday's blowout, started and contributed 10 points and 15 rebounds as Memphis did a better job staying with the Warriors on the boards — outrebounded 54-48. ... The Grizzlies were 9 of 35 on 3s.

Warriors: The Warriors committed 11 first-half turnovers and 16 total. ... Golden State started 0 for 15 from deep before Otto Porter Jr. connected 3:24 before halftime. Curry missed his initial five 3s before becoming the first player in NBA history to make 500 postseason 3-pointers when he connected 46.2 seconds before halftime. ... The Warriors were the first team to go 0 of 15 from long range to start a game since the 2011 Thunder were 0 for 16 against Dallas in Game 3 of the Western Conference finals, according to Elias. ... The Warriors had no immediate additional positive COVID tests, the team said.