PHILADELPHIA — Kevin Durant had 29 points, 15 rebounds and 12 assists, James Harden scored 20 points and the Brooklyn Nets closed with a 16-1 run to beat the Philadelphia 76ers 114-109 on Friday night (Saturday, Manila time) as each team played without a much-discussed star guard.

The Nets were missing Kyrie Irving, who isn't with the team due to his refusal to get a COVID-19 vaccine. Ben Simmons sat out the home opener for personal reasons and the Sixers do not know when the three-time All-Star will return.

They could have used Simmons' defense to shut down the Nets late.

The Sixers tossed up airballs on consecutive possessions early in Brooklyn's run. The Nets had never led or tied until LaMarcus Aldridge's dunk with 48 seconds left made it 108-108. He sank the free throw for the one-point lead.

Durant made two free throws to seal Brooklyn's comeback from 14 points down.

Joel Embiid scored 19 points on a sore right knee suffered against New Orleans in the opener. He left for the locker room in the final moments of the first half on Friday and warmed up at halftime with a wrap on his knee but started the third quarter. Tobias Harris and Seth Curry each scored 23 points for the Sixers.

Simmons has not played since his offseason trade demand. He met with the Sixers before the morning shootaround. Coach Doc Rivers said it was a "productive day" and hoped it was a start toward bringing Simmons back into the fold.

The 25-year-old Australian had become the No. 1 target for Sixers' fans derision and they came dressed to mock the absentee guard. The most popular was a form of a Mister Softee T-shirt with an ice cream swirl on Simmons' head. Another fan dressed in a red clown wig and clown nose and taped "CLOWN" over his No. 25 Simmons jersey. The parking lots found bootleg T-shirt sales of Simmons on a "MISSING" poster.

Durant and Harden were a two-player show until the fourth and the Nets had no answers when Tyrese Maxey, Simmons' replacement, scored five straight points early in the quarter that pushed the lead to double digits.

Tobias Harris hit Matisse Thybulle on an alley-oop that made it 108-98 and even made Embiid rise off the bench in celebration. The Sixers would not score again until Seth Curry made 1 of 2 free throws with 15.2 seconds left to make it 111-109 and the collapse was complete. 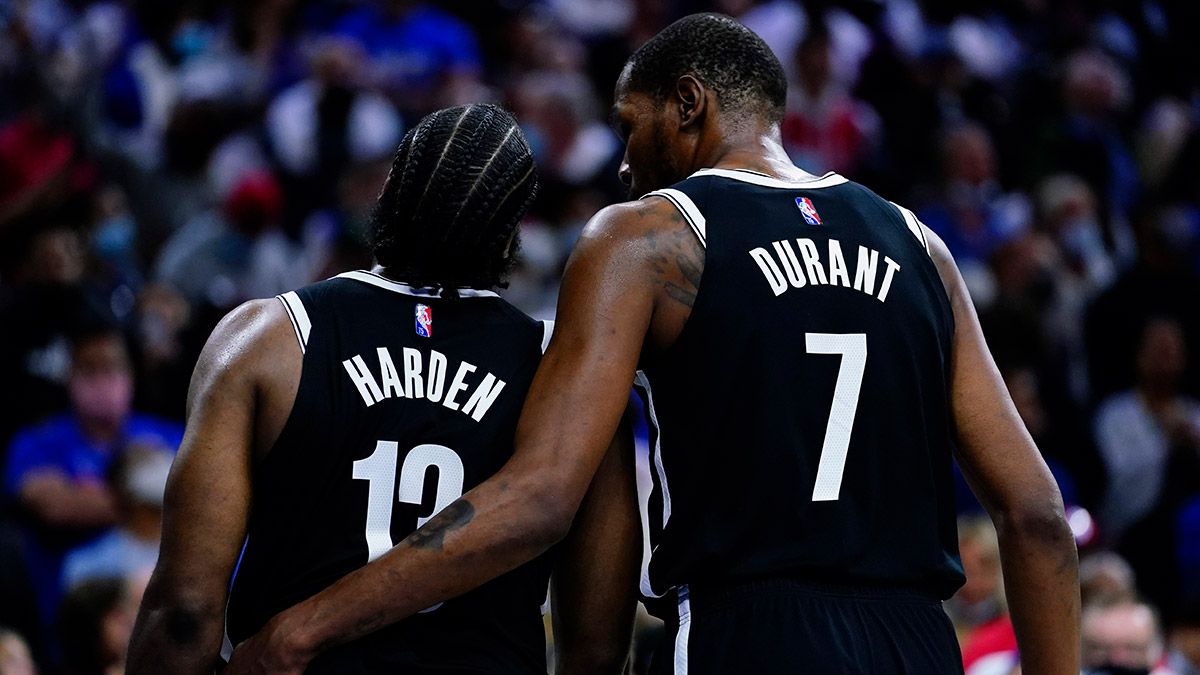 James Harden and Kevin Durant show the way as the Nets bounce back from an opening day defeat.

The Sixers did their best to defuse potential anti-Simmons chants — a Flyers game in the same building this week got profanely loud toward Simmons — by sending Embiid out to address the crowd.

Embiid thanked the fans for coming after having to stay home most of last season amid the pandemic and asked they support Simmons because "he's still our brother." The crowd listened and no sustained chants of any substance ever developed.

76ers: Simmons was suspended for the first game of the season for conduct detrimental to the team after Rivers threw him out of practice for refusing to participate in a drill. Rivers said he didn't want to predict when Simmons might rejoin the Sixers — if the guard returns at all. "We're going to make sure Ben's with the right people and see where that goes," he said. "He is part of the team. We have certain rules, obviously. The other day, that didn't happen. But today was a good day." ... Embiid was hit with a technical in the first half.

"If they have a top 575, maybe I have a chance." — Rivers, a former NBA All-Star guard, on not making the NBA's 75th anniversary team.

Nets: Brooklyn heads home Sunday to face Charlotte in the start of a season-long six-game homestand. Washington, Miami, Indiana, Detroit and Atlanta are on the schedule.

76ers: Simmons' next two chances to return are both on the road, Sunday at Oklahoma City and Tuesday at New York.