NEW YORK — Kevin Durant scored 32 points in three quarters of a top-to-bottom blowout that sent the Brooklyn Nets halfway to the Eastern Conference finals with a 125-86 rout of the Milwaukee Bucks on Monday night (Tuesday, Manila time).

Playing without the injured James Harden but showing no hint that they needed him, the Nets led by as much as 49 and held the NBA's highest-scoring team 34 points below its season average.

The Nets broke down the Bucks' defense off the dribble all night, setting up uncontested shots that they mostly made. Brooklyn shot 52% from the field and was 21 for 42 from 3-point range.

The Bucks swept their first-round series against Miami but need a big turnaround when they get back home to avoid being swept themselves now.

Giannis Antetokounmpo had 18 points and 11 rebounds for the Bucks, but was thoroughly outplayed by Durant in a matchup of NBA MVP winners and sat dejected on the Bucks' bench early in the fourth quarter with the game long since hopelessly out of reach.

Khris Middleton added 17 points after a slow start to the series and Jrue Holiday had 13.

Game Three is Thursday in Milwaukee, where the Bucks beat the Nets twice in May while Harden was out with a right hamstring injury.

He left Game 1 after 43 seconds with tightness of that hamstring, but the Nets shook that off to win 115-107. The Nets haven't given a timetable for his return, though he didn't appear too hurt going out under the backboard to holler toward Durant after his driving layup made it 95-65 after three.

The onslaught came quickly. A three-point game midway through the first quarter became 36-19 by the end of it after the Nets closed with a 23-9 surge. Durant scored 13 points, playing the entire quarter.

He and Irving sat to start the second but the Nets opened with a 7-2 burst to push the lead to 43-21 on Blake Griffin's 3-pointer.

Griffin had the highlight play of the half, cutting along the baseline to take a pass from Brown and swoop in for the slam, with Antetokounmpo turning his head away at the last second so the ball couldn't crash down on top of him.

Who could blame the Bucks for not wanting to look?

The lead ballooned to 27 late in the half before Brooklyn took a 65-41 cushion to the locker room. 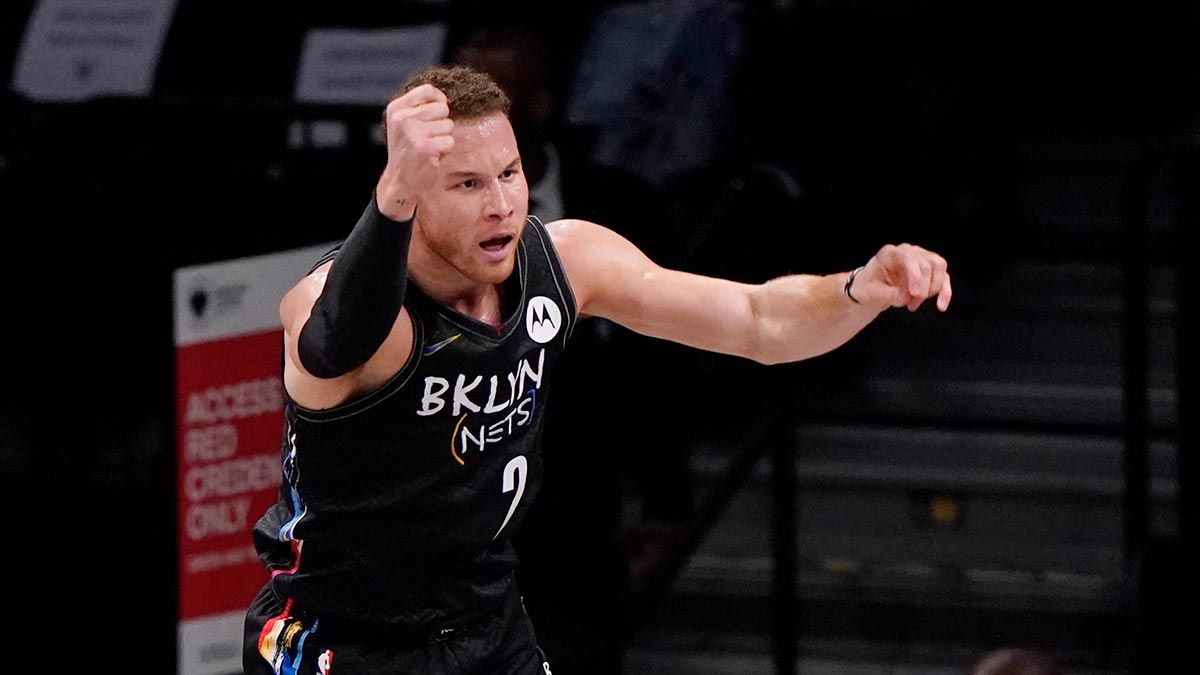 Bucks: After going 6 for 30 on 3-pointers in Game 1, the Bucks slightly improved to 8 for 27 in this one. ... P.J. Tucker got his second straight start but had just two points in 22 minutes.

Nets: Durant has scored 25 or more points in six of the Nets' seven playoff games. ... Coach Steve Nash said he had no new update on Harden or Jeff Green, who missed his fifth straight game with a left plantar fascia strain.

Though Nets fans continued to count when Antetokounmpo got the ball at the free throw line to see if he would shoot it in the allowable 10 seconds, the clock that ran on the overhead video board during Game 1 wasn't shown. Bucks coach Mike Budenholzer said he thought he noticed people looking up at it in the opener but didn't know why.

"It's rare that I even can pick up the hint of something, so I think the whole free throw thing, Giannis is in a good place mentally," Budenholzer said. "We want him to get there, we want him to shoot more. I think it's kind of a nonfactor, non issue."