The scrum decided nothing — just like the first six games.

All that matters now for the Raptors and Celtics is Friday night (Saturday, Manila time), when they’ll play Game 7 of their Eastern Conference semifinal series and decide who’ll face the Miami Heat in the East finals next week. Boston won the first two games of the series, Toronto won three of the last four. 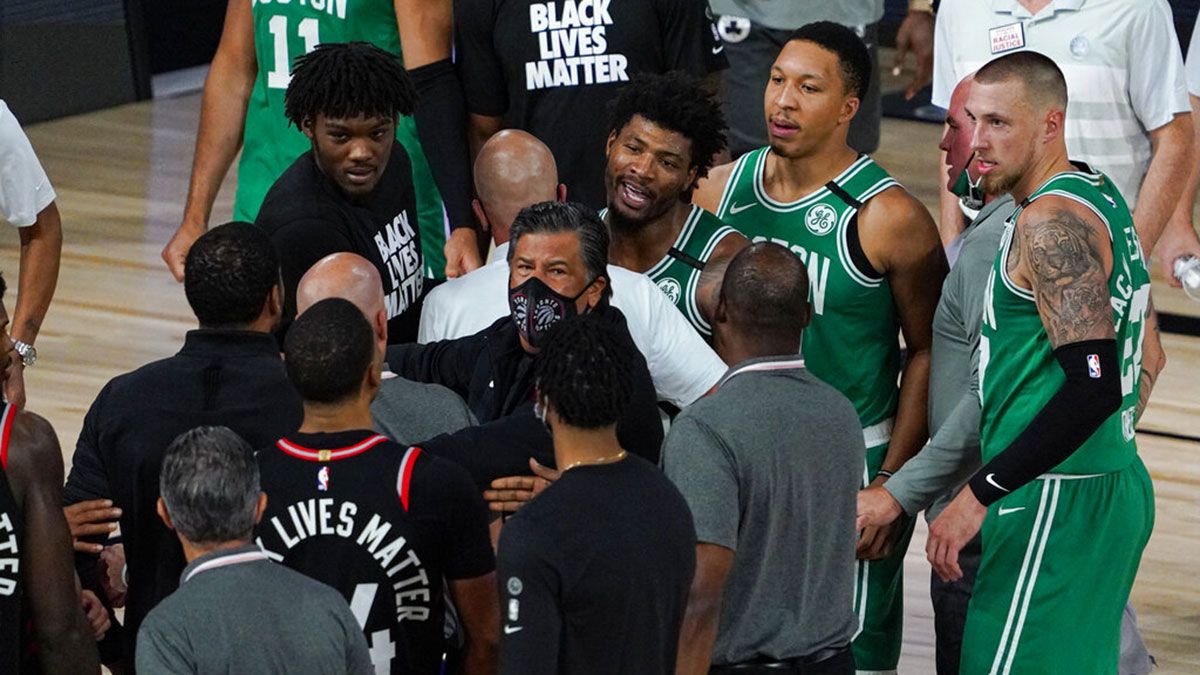 Marcus Smart had a few words to say to the Raptors after Game Six.

There are two NBA games on Friday’s (Saturday's) schedule, one being a Game 7 — and the other likely to have a Game 7 feel, especially for the Denver Nuggets. Denver trails the Los Angeles Clippers 3-1 in their Western Conference semifinals matchup, so it’s win-or-go-home time for the Nuggets, who are already 3-0 in elimination games this season after rallying to top Utah in the first round.

The Clippers could reach the Western Conference finals for the first time.

“I’m not worried about anything other than the game we play next,” Clippers coach Doc Rivers said Thursday. “For me, quite honestly, I think if you do that right, all the other stuff will take care of itself. I’m not a looker ahead. ... I just want to win tomorrow.”

The Raptors and Celtics — who played for 58 minutes in Game 6 before Toronto found a way to extend its season to Friday — both had the day off Thursday. A few guys did some light work, but the rotation players spent the day tending to their bodies and minds.

“This is kind of why you coach,” Toronto coach Nick Nurse said. “I’m not saying for a Game 7, in general. I’m just saying the super-competitive playoffs, a lot on the line, it’s kind of the crazy love of a coach, right?”

The Celtics likely weren’t thrilled when the NBA’s Last 2 Minute Report — a review of calls late in close games — was released Thursday. The league said two non-calls ended up going against the Celtics at crucial times in Game 6.

Kemba Walker’s driving layup attempt with the game tied at 98-98 should have led to a foul call with about 3.4 seconds left in regulation, the league said. Walker missed the shot and ended up on the floor; no foul was called.

“I just missed a layup, I guess,” Walker said.

The league also said Thursday that Toronto’s Norman Powell should have been called for traveling with 1:34 left in the first overtime, a play where he ended up fouled by Walker and made two free throws.

Regardless, that’s all over now. And Celtics coach Brad Stevens said there is an appreciation that comes with being parts of moments, and series, like this one.

“The older I’ve gotten, the more I appreciate it,” Stevens said Thursday. “And I think that’s because I know how hard winning is. ... That’s why I slept well last night. I’m excited about tomorrow. It’s a great opportunity. I look at all these things as great opportunities.

A look at Friday’s games:

— NEED TO KNOW: The Clippers are 0-5 all-time in games where they could clinch a trip to the conference finals. The Buffalo Braves lost Game 7 to Washington in 1975 in the East semis, then the Clippers lost Game 7 to Phoenix in the 2006 West semis and then Games 5, 6 and 7 to Houston in the 2015 West semis.

— KEEP AN EYE ON: Denver’s Michael Porter Jr. made interesting postgame comments after Game 4, saying the Nuggets needed to get more players involved to have a chance. He might not have been wrong, but his delivery was criticized — so he could feel some pressure going into Game 5.

— INJURY WATCH: The Clippers are as healthy now as they’ve been really at any point all season. It shows.

— PRESSURE IS ON: Denver rallied from 3-1 down against Utah. The Nuggets can’t lose contact with the Clippers early in Game 5, or this could end quickly.

— NEED TO KNOW: Game 7’s in the NBA rarely disappoint, at least in recent years. Each of the last four Game 7’s have been decided by four points or less and the last eight ultimate games were decided by single digits; that’s the longest such streak in the NBA since an 11-game run from 1978 through 1981. There hasn’t been an overtime Game 7 in the NBA for 14 years, the second-longest such drought in league history.

— KEEP AN EYE ON: The fatigue levels. Entering Thursday, there were 12 instances of a player logging more than 49 minutes in a game this season — and eight of those 12 came in Game 6, four from the Raptors, four from the Celtics. Lowry, at 34, became the oldest player to play 53 minutes in a playoff game since Robert Parish (then also 34) did it for Boston on May 26, 1988.

— PRESSURE IS ON: It’s on the Raptors because they’re the defending champions. It’s on the Celtics because they’ve won three games, plus should have won Game 3 and had their chances to win Game 6. It’s Game 7. They’ll all feel pressure.
___