“I like the toughness of the team,” Knicks coach Tom Thibodeau said. “They persevered and just found away.”

“It’s really good,” Randle said of the team’s recent play, adding that the Knicks “need to keep doing it to get better.”

While the Knicks continued their successful run – winning their 12th in the last 13 – one of the prime spots of the four play-in teams in the West is becoming more elusive for Memphis. The loss was the Grizzlies fourth in the last five. Coupled with Golden State’s win over New Orleans earlier Monday night, the Warriors moved into eighth place, a half-game ahead of Memphis, now in ninth.

“All these games are big,” said Dillon Brooks, who had 25 points for Memphis. “We’ve got to realize that. Our attention to detail, our intensity, our attention to everything has got to be heightened. We’ve just got to be ready every single game.”

Memphis, which trailed by as many as 17 in the second half, tried to rally in the fourth quarter and cut the New York advantage to 101-96 with 5:28 left. Randle answered with a 3-pointer with 3:57 remaining.

But with Memphis still within five points as the game headed down the stretch, the Grizzlies received five technicals in a span of 18 seconds to seal the loss.

Asked about the technicals, Memphis coach Taylor Jenkins, who received two of them and was ejected, avoided the question, saying: “I’m really excited about how hard our guys played, and we have to build on this. We’ve got a lot of basketball left and we’re turning in the right direction.”

“They made tough shots. You’ve got to tip your hat to that squad and take the positives out of this game,” Brooks said. But he also realizes the importance of the rest of the games as the Grizzlies maneuver for the best postseason position.

The Knicks shot 77.3% in the second quarter to build the lead to 69-58 at the break. Rose, who played his one season of college basketball at the University of Memphis, missed only one of his seven shots in the half to lead New York with 15 points.

New York couldn’t maintain that shooting pace, but still kept its lead through the third. Brooks pushed the Grizzlies closer, pulling Memphis within six at one point of the period.

“We built a good lead in the third,” Thibodeau said. “We struggled a little in the fourth, but we found a way to win.”

Knicks: C Nerlens Noel, who suffered a left ankle sprain in Sunday’s win over the Rockets, was out. Taj Gibson started at center for New York, his third start of the season. ... Randle missed his first four shots and was 1 of 7 in the first quarter. ... Gibson had 12 rebounds and five blocks.

Grizzlies: G Grayson Allen, who missed the previous two games with an injured left hand, returned to action and started. ... Brooks tied his season-high with five 3-pointers. …Memphis coach Taylor Jenkins was ejected with 1:20 left when he received a pair of technicals arguing a no-call on a drive to the basket by Morant. Then Brooks got a technical 18 seconds later and Morant got two technical and he was ejected also. 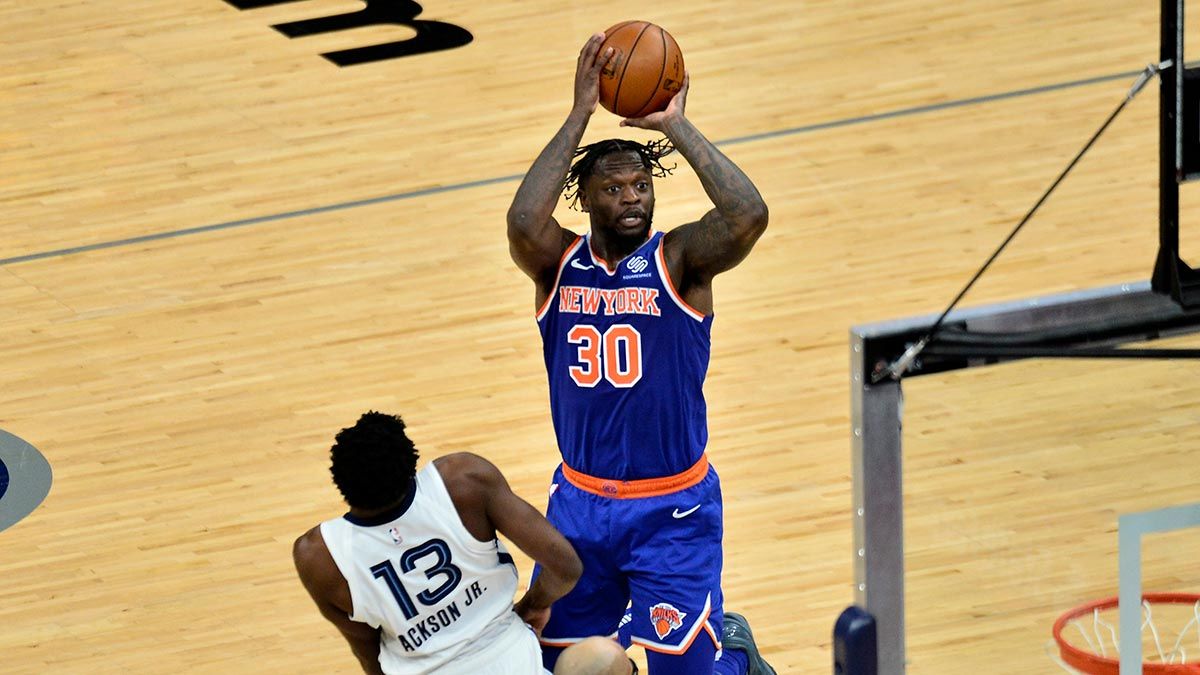 While he may not be at the top of the list, Randle is getting some mention as an MVP candidate because of his play. Asked if he deserves to be part of such discussions, Randle replied: “For sure. I’m not going to shy away from it. For me, it’s about getting better from game to game and improving as a player.”

Monday was the 10-year anniversary of Rose winning the 2011 MVP – the youngest player to win the award. Asked about the memory, the veteran reminded everyone that he is now 32 years old. “It is crazy. I mean the story is crazy. I’m just happy to be here and still playing decent basketball. I’m very appreciative.

Knicks: Continue a six-game swing through the Western Conference in Denver against the Nuggets on Wednesday.

Grizzlies: Face the Timberwolves in Minnesota on Wednesday.