Bojan Bogdanovic had 21 points and Donovan Mitchell added 18 for Utah (17-5).

Atlanta point guard Trae Young was held out with a bruised right calf. Rajon Rondo made his second start of the season and did not score. Another starter, forward De'Andre Hunter (right knee), missed his third consecutive game. 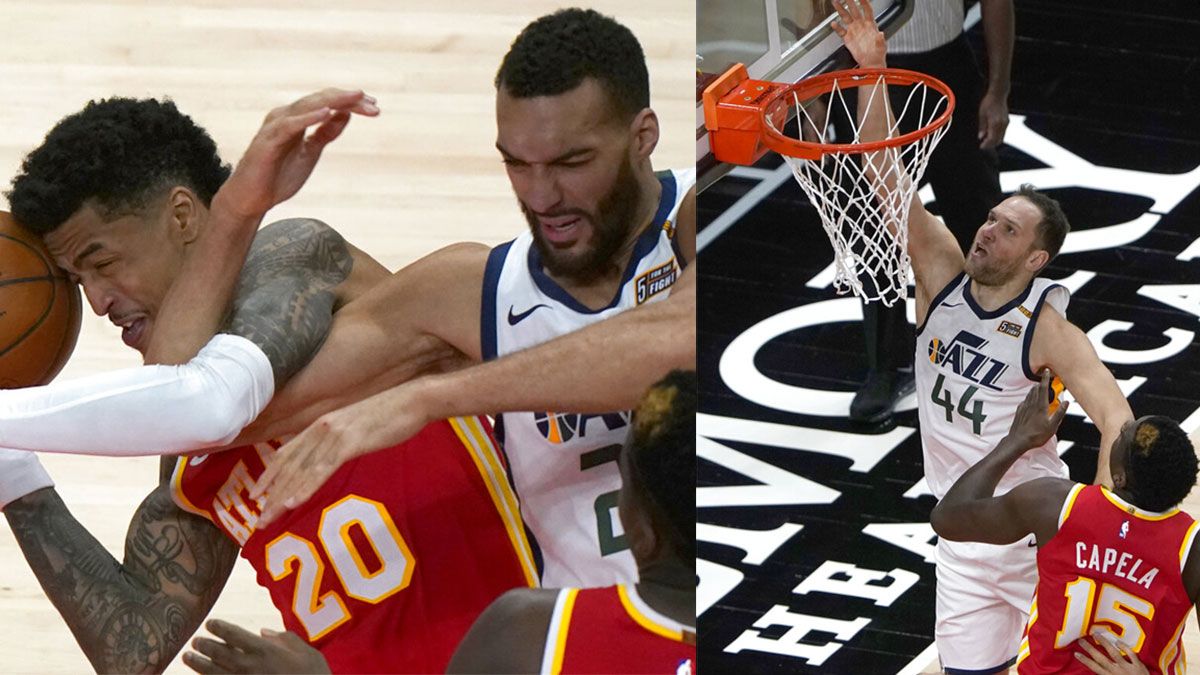 John Collins and Rudy Gobert fight for control of the leather as Bojan Bogdanovic scores a layup over Clint Capela.

Without Young, their leading scorer, the Hawks' offense struggled.

After failing to lead at any point of its 116-92 loss at Utah on Jan. 15, Atlanta led 2-0 when Kevin Huerter opened the game with a jumper. It was the Hawks' only lead.

Utah pushed the lead back to double figures in the third quarter and continued to expand the advantage. A 3-pointer by Clarkson late in the period stretched the lead to 80-60.

The Hawks (10-12) fell to 5-7 at home with their third consecutive loss, each at State Farm Arena against a Western Conference opponent.

The Hawks also have played Philadelphia, the Los Angeles Clippers and the Los Angeles Lakers, teams competing with Utah for the league's best record. Atlanta coach Lloyd Pierce said before the game he believes the Jazz are "the best team we have played this year, and I say team strongly."

Jazz: After a slow start, Utah played closer to its standard as the NBA's best 3-point shooting team. The Jazz made four of six 3s in the third period and 13 of 27 for the game. Clarkson made five of seven 3s. Utah leads the NBA with its average of 16.9 3s per game. Entering the game, Utah's 355 3s through 21 games were the most in league history. ... Rudy Gobert had 11 points and 12 rebounds.

Hawks: Pierce made a plea for fans — and media — to give Young more All-Star support. Young is only sixth among Eastern Conference guards in the All-Star voting. He was a starter in the 2020 game. ... Rookie Onyeka Okongwu (left Achilles) did not play. ... Capela had 14 rebounds in the first half and 17 overall, extending his streak of games with at least 10 rebounds to 18. It is the NBA's longest active streak.

Jazz: Will continue three-game road trip when they visit Charlotte on Friday night to complete a back-to-back.

Hawks: Host Toronto on Saturday as they continue a stretch of playing six of seven games at home.