PHILADELPHIA — Joel Embiid took his lumps and powered his way to 31 points and 11 rebounds, Tyrese Maxey showed he was no one-game postseason wonder and the Philadelphia 76ers beat the Toronto Raptors, 112-97, on Monday night (Tuesday, Manila time) for a 2-0 lead in the first-round series.

Game Three in the Eastern Conference series is on Wednesday in Toronto.

The Raptors trailed by 27 points but showed some life in the fourth cutting it to 11 until Maxey, the Game One star, buried a 3-pointer that got the Sixers rolling again.

OG Anunoby led the Raptors with 26 points. Pascal Siakam and Fred VanVleet each had 20.

The Raptors came ready to rumble after coach Nick Nurse accused the officials of letting the Sixers get away with hard fouls in Game One. Not even two minutes into the game, Anunoby shoved Embiid, Embiid shoved back and both teams had to be separated as the crowd erupted. Anunoby and Embiid were both whistled for technical fouls.

The Raptors raced to an 11-2 lead and had the first six fouls to none for the 76ers.

All that pushing and shoving may as well been cold water on the Sixers' slumbering Big Man.

Embiid, the NBA scoring champion who had only 19 points in Game One, was fouled hard by Siakam and made a free throw — one of the 11 he made in the quarter on 12 attempts. He matched his Game One total with 19 points in the quarter.

VanVleet scored 17 points in the half and tried to keep the Raptors in the game. Maxey, who had 38 points in Game One, didn't score until he hit a floater in the lane with 8:03 left in the second. He followed with an acrobatic layup for a 50-42 lead and suddenly the Sixers had some juice. Harden hit a 3-pointer for an 11-point lead.

The half ended with a tense moment.

Harden tried to split two defenders on a drive down the lane in the final seconds of the half and his knee crashed into Embiid's left knee. Embiid's left ankle seemed to buckle and both players went down in a heap. Both stars were sprawled on the backs for several moments: Harden rubbed his neck and head. Embiid limped down the court on the next possession.

Sixers fans held their breath at the half.

Philly's first bucket of the third quarter? How about Harden-to-Embiid on an alley-oop that settled nerves and rattled the rim.

Embiid scored nine more points in the third and Maxey had seven for a 95-73 lead at the end of the third. Embiid had 28 points and 11 rebounds before he picked up his first foul midway through the fourth. 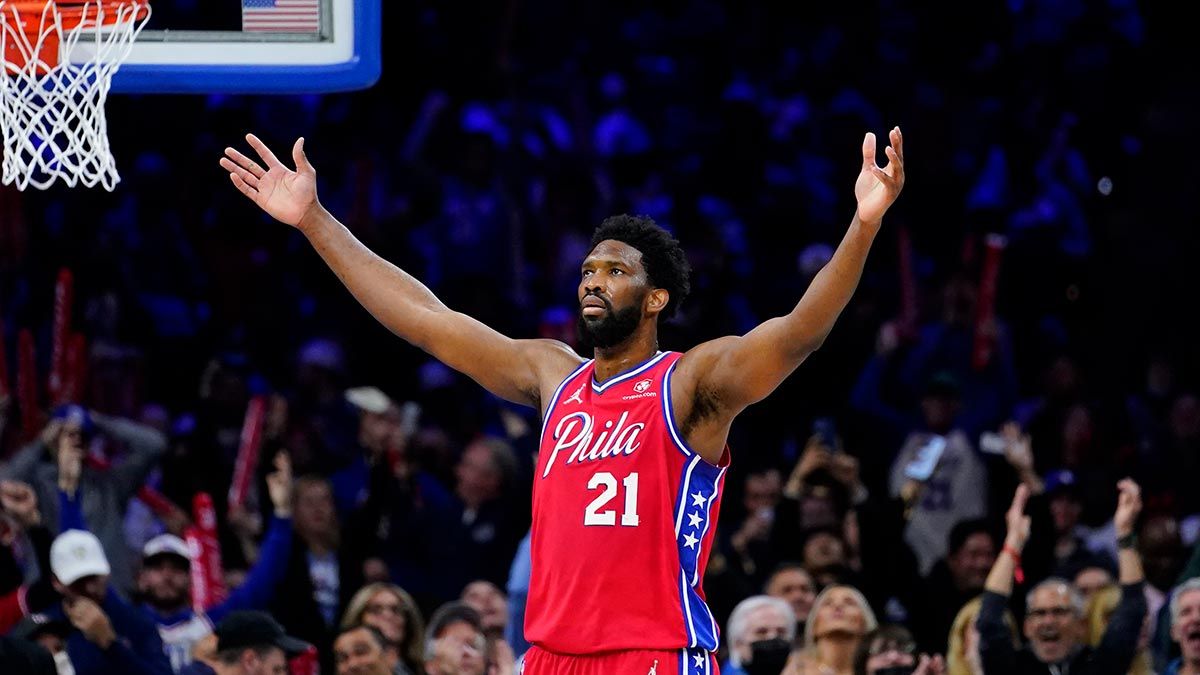 Raptors: Gary Trent Jr. was a game-time decision with an illness. He did not score and had four fouls in the first half. He did not return in the second.

Raptors forward Scottie Barnes sat out with a sprained left ankle suffered in Game One. Barnes did not reveal a timetable for his return but said he was "getting better each and every day."

"I hope that they've got enough guts to at least stop the game and look at that stuff tonight. I don't mind physicality. It's the playoffs, we expect it to be physical." - Nurse, before the game, on the officiating.

The Sixers head to Toronto and will play the next two games without defensive ace Matisse Thybulle. Thybulle, who received one third-place vote in the NBA defensive player of the year award voting, is barred from entering Canada because he is not fully vaccinated.