Only there was no goalie.

This was just a free throw, no time on the clock, nobody else from the Miami Heat or Milwaukee Bucks standing along the lane. Game tied, two chances to make one shot, the outcome completely in Butler's hands.

"I wish I could kick it in there and say that's how I won it," Butler said.

Rattling home a free throw will have to suffice. Butler got the first one to bounce home, made a second one that was irrelevant, and the Heat grabbed control of their East semifinal matchup with a 116-114 win over the Bucks on Wednesday night (Thursday, Manila time) — becoming the first No. 5 seed to take a 2-0 series lead over a No. 1 seed.

Butler was fouled by Giannis Antetokounmpo with no time remaining, the referees said, a call that was affirmed in a review after the initial whistle. The ball was out of Butler's hands when Antetokounmpo clearly made contact. 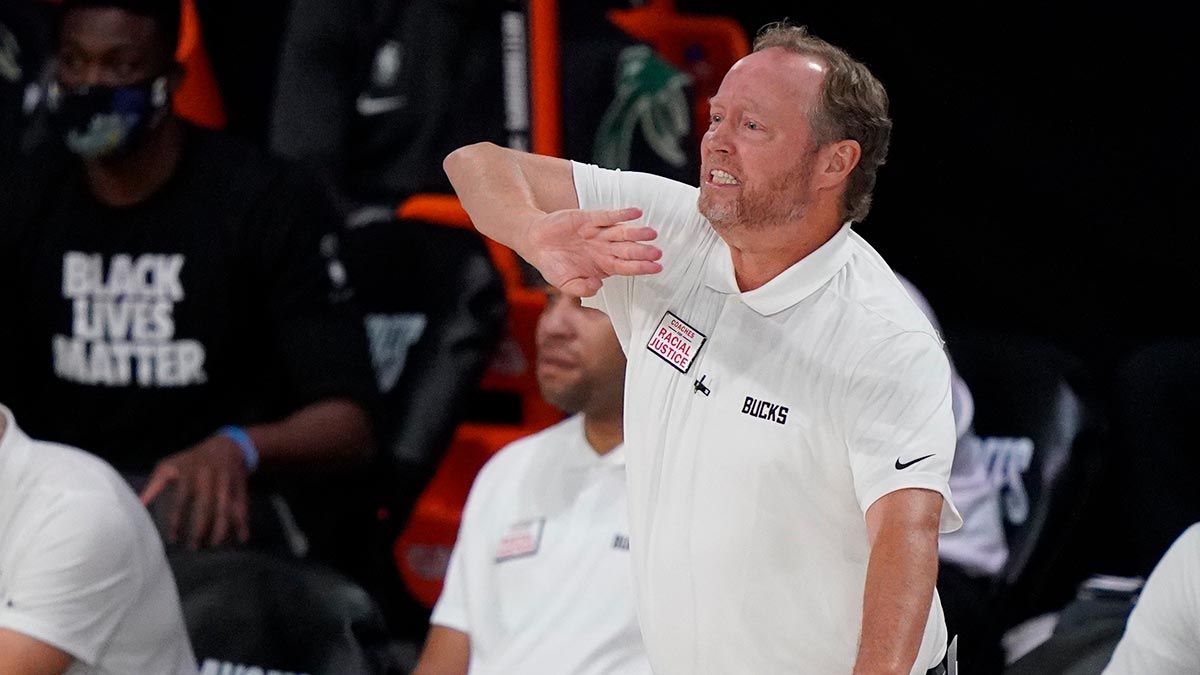 "I'd say we're disappointed with the judgment, the decision, the timing," Bucks coach Mike Budenholzer said.

"He must be allowed the space to land and Giannis contacts him with his left hand on his torso and I felt like it affected his balance and did not allow him the space to land in a normal basketball position," Davis told a pool reporter postgame. "As a result I judged this to be a shooting foul."

The Heat were up by six with 27 seconds left and frittered that away, Butler giving Milwaukee two points with a most ill-advised pass — "a terrible IQ play," he acknowledged — back toward the Bucks' basket that turned into a layup by Brook Lopez.

That got Milwaukee within two, and Butler made one free throw with 7.7 seconds left to get the lead back to three. Khris Middleton was fouled by Goran Dragic — a call Miami argued to no avail, because the Heat unsuccessfully used their challenge on a foul of Lopez shooting a 3 in the first quarter — with 4.3 seconds left, and the All-Star made all three free throws to tie it. Davis, in the postgame pool report, said Dragic was properly assessed a foul.

Butler wound up with the ball in the deep corner, and Antetokounmpo — the reigning Defensive Player of the Year — contested.

"I feel like, personally, it was the right play," Antetokounmpo said. 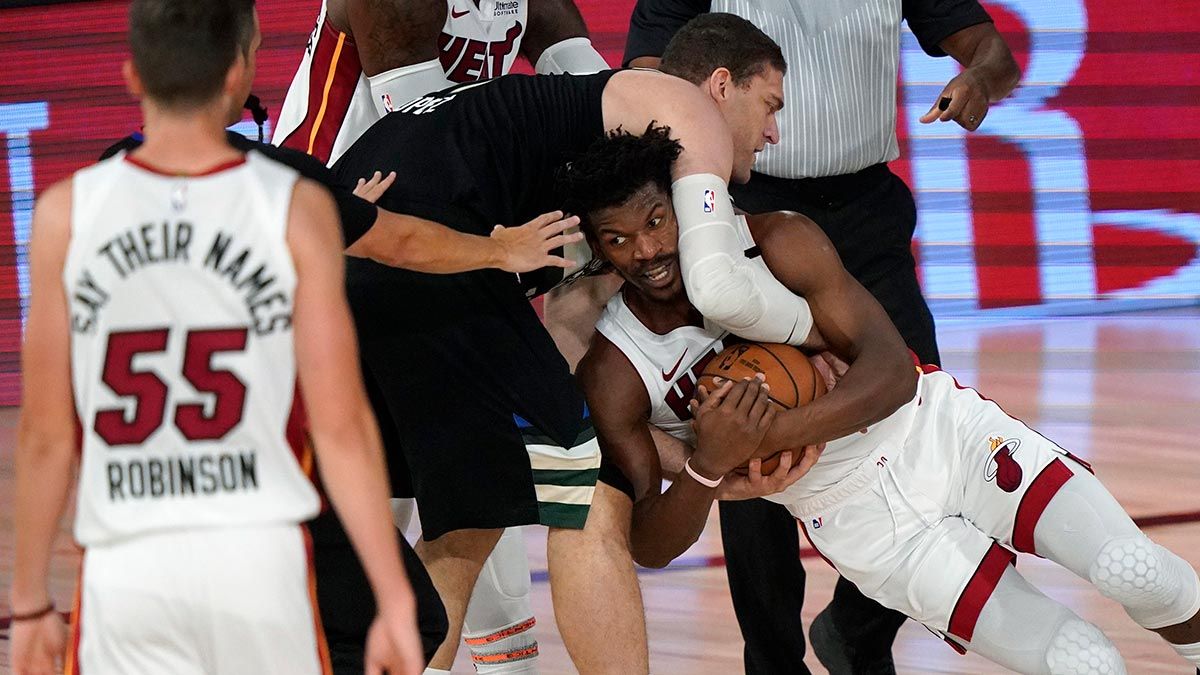 Then came the whistle, and that was that. Milwaukee couldn't challenge the call; the Bucks used their review to overturn what would have been Antetokounmpo's fourth foul on a charging call into Butler early in the fourth quarter.

Dragic scored 23 points, Tyler Herro added 17 off the bench and Jae Crowder had 16 for Miami. Bam Adebayo scored 15 points, Butler and Duncan Robinson each had 13 and Kelly Olynyk added 11 for Miami — which is 6-0 in this postseason.

"Doesn't take a genius to know that we were going to try to get that ball in Jimmy's mitts and see what can happen from there," Heat coach Erik Spoelstra said. "He was very patient. There were four seconds left. I think a lot of players would have rushed. He took his time."

Antetokounmpo had 29 points and 14 rebounds for the Bucks. Middleton scored 23 points for Milwaukee, which got 16 apiece from Lopez and Eric Bledsoe and 14 from George Hill.

Miami's lead was 90-86 entering the fourth — and Milwaukee had the lead back on the very first possession of the final quarter.

Middleton was fouled on a 3-point try, made the first two free throws and the rebound of the third was controlled by the Bucks. Kyle Korver made a 3-pointer off that rebound to cap a five-point possession for Milwaukee, which had the lead again for the first time since 14-13.

But on a physical night — 71 foul shots were attempted, there were two flagrant fouls and a technical on a play where another flagrant was being considered — the Heat stood tallest at the end.

"You can't relax, you can't get comfortable," Butler said. "They're too good of a team." 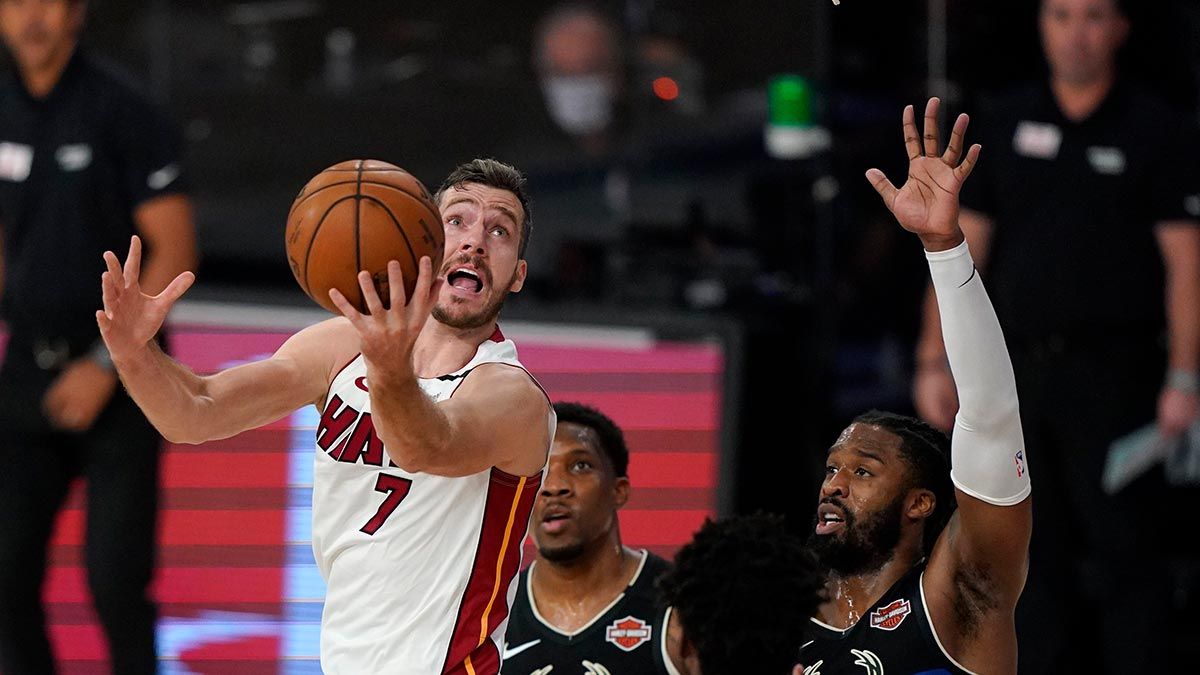 Heat: Dragic has scored at least 20 points in six consecutive playoff games. It's the 12th such streak in Heat history; Dwyane Wade had six, LeBron James had the other five. ... Andre Iguodala left in the third quarter with a sprained right ankle, which he turned when he didn't have space to land and came down on Korver's foot.

The Heat fouled the Bucks five times on 3-point tries in the game, including twice against Lopez in a 26-second span of the first quarter.

Since the league went to the 16-team format in 1984, only four No. 1 seeds have dropped the first two games of a first- or second-round series. Phoenix (1993, in a best-of-five) and Boston (2017) both rallied to win first-round matchups; Toronto got swept by Cleveland in the 2018 East semifinals.

Game Three is on Friday.