Luguentz Dort scored career-high 42 points and Moses Brown had 12 points and 15 rebounds for the Thunder, who have lost seven in a row and 10 of 11.

Bogdanovic, who scored a season-high 33 points in his last game, left his familiar spot on the perimeter and repeatedly took the ball to the basket. He finished with a season-high 10-for-10 shooting from the free throw line.

In pain, Bogdanovic held his right wrist after getting knocked to the floor in the third quarter. Surgery on that wrist ended his season before the bubble last season. But, Bogdanovic kept playing and was a key to Utah's 66-38 scoring advantage in the second and third quarters.

Mitchell, who averaged over 40 points in his previous four games, didn't need to be nearly as dominant against the Thunder.

Rudy Gobert had 13 points, 14 rebounds and seven blocks for Utah, which held the Thunder to 38.7% shooting.

The Jazz used a 12-0 run after a 55-53 halftime edge to blow open a close game. Mitchell made consecutive 3-pointers to cap the run.

The Thunder never got within single digits until the final couple minutes, as Utah pushed the lead to as many as 25 points.

Mike Conley, who rested the first half of the back-to-back when the Jazz had their 24-game home win streak snapped, had 15 points and a season-high 14 assists for league-leading Utah (41-14).

Georges Niang made his first start of the season and the second of his five-year career for the short-handed Jazz and scored 18 points, including six 3-pointers,. He had a season-high 10 rebounds.

Coming into the game, The Thunder's point differential over their six-game losing streak was 28.5 points per loss, the worst mark for any team in 17 years. 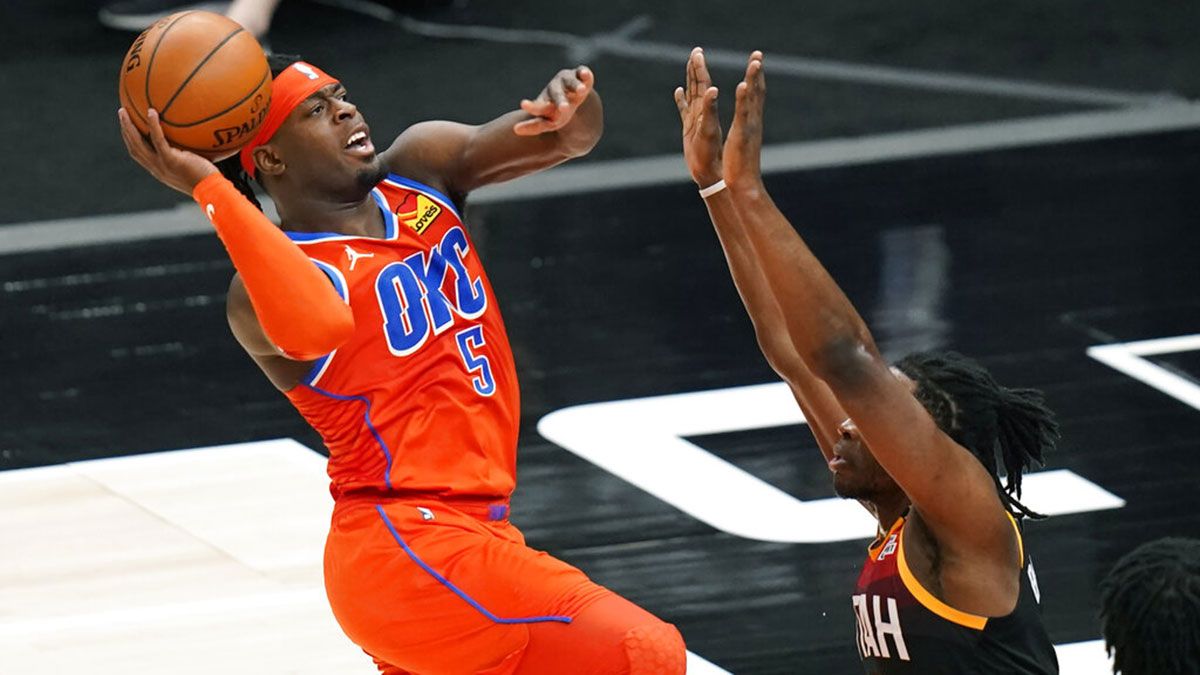 Luguentz Dort goes up for a floater over Jarrell Brantley.

Known for his defensive prowess rather than his shooting, Dort scored 18 points — a career high in a quarter – to power the Thunder to a 31-14 lead in the first period.

Dort looked unstoppable in his second game after missing seven contests in the concussion protocol. The Jazz paid more attention to him in the middle quarters. He finished with a flurry to make the margin respectable.

The game was the third in four nights for the Jazz, who have won nine straight on zero days rest and are 10-1 overall on the second game of back-to-back sets.

Thunder: Aleksej Pokusevski (sore arm), Shai Gilgeous-Alexander (sore foot) and Mike Muscala (sprained ankle) missed the game. … Dort scored his previous career high of 26 points against the Jazz in December. He went 9 of- 1 from the field and 5 of 7 from 3-point range in that game. … At Bazley's urging, OKC coach Mark Daigneault successfully challenged a foul on Bogdanovic's 3-point shot.

Jazz: Royce O'Neale (rest), Joe Ingles (sore knee) and Jordan Clarkson (sprained ankle) were Utah regulars who sat out. … Bogdanovic made a season high 10 free throws on 10 attempts, and Jarrell Brantley had a season-best 10 points. … Gobert had four blocks in the fourth quarter.

Jazz: Host the Indiana Pacers in a rare day game on Friday.