DALLAS — New Mavericks coach Jason Kidd and general manager Nico Harrison were introduced Thursday (Friday, Manila time) by their new boss, who called it "a new chapter" for a franchise that had not changed GMs under his 21-year ownership and has not won a playoff series since winning the 2011 NBA championship.

Owner Mark Cuban said the need for "a new voice" motivated him to change GMs for the first time.

"The league has changed in the 21 years since I've been here," he said. "Players have changed. How you build a championship team has changed. Sometimes you just have to look to have a different tool set."

Kidd is a Hall of Fame guard who had two playing stints in Dallas during his 19-season NBA career that included the championship season. He was hired last month after Rick Carlisle resigned following 13 seasons with the Mavericks.

"I guess it's 'Hello, Dallas,' again," Kidd said. "What a dream come true – to be drafted (second overall in 1994), to win Rookie of the Year, to win a championship and then come back to be the head coach. … We're going to pay attention to the small things, which is going to lead us down the road to winning that trophy."

Who is Nico Harrison, the Mavs' new GM?

Harrison spent 19 years as an executive at Nike before he was hired a few weeks ago to replace Donnie Nelson, who left the organization a day before Carlisle's resignation. Nelson joined the franchise in 1998 while his father, Don, coached the Mavericks and was promoted to general manager in 2002 under Cuban.

"For me to leave a dream job to go to another dream job, everything had to check the boxes," said Harrison, who said he was approached by multiple NBA teams while at Nike. "The city, the coach, the fans, everything, the owner –- it was a no-brainer." 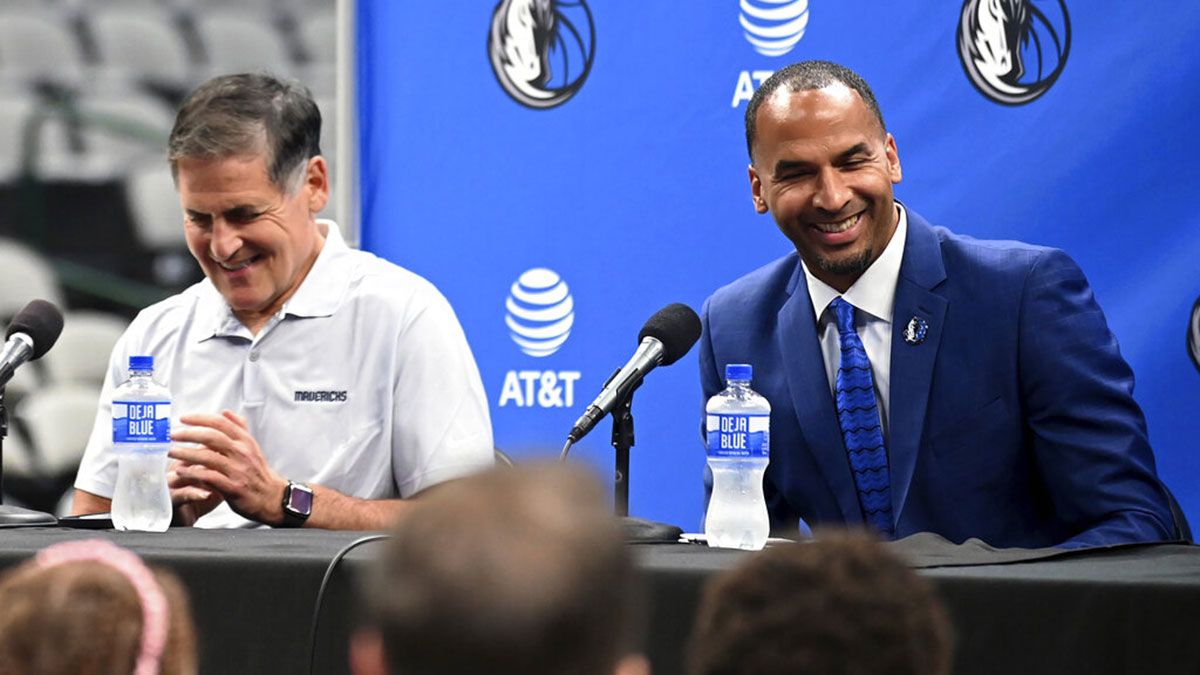 Kidd knows his primary task is to mentor and develop 22-year-old superstar guard Luka Doncic, whose flashy playing style reminds many of his new coach's playing days. Harrison will need to build a roster around the talented Slovenian that will do more than go out in the first round of the playoffs, which Dallas has done in the past two seasons.

"My job is to give him answers to the test," Kidd said of Doncic. "His imagination is at the highest level, which is a great thing to be a part of. I (as a young player) tried a lot of things, and I know I drove a lot of my coaches crazy. I won't get mad because I've been in those shoes."

Kidd said he's spoken this summer by phone and via text with Doncic, who has been playing with his national team ahead of the Olympics. One of their collective goals could be lessening his load.

"Not having to bring the ball up every time and start the play," Kidd said. "When you look at the fourth quarter, he wears down at times."

Harrison, a three-time All-Big Sky forward at Montana State during the mid-1990s, was a Nike liaison to Kobe Bryant and to former Mavericks stars Dirk Nowitzki, Steve Nash and Michael Finley. Nowitzki and Finley are now in the Dallas front office.

"He demonstrated a long history of putting people into a position to succeed and then enabling them to succeed," Cuban said. "That's a unique skillset that's hard to find."

Kidd pleaded guilty to spousal abuse in 2011 involving his first wife and joins an organization that experienced a work-environment scandal in 2018 that led to the hiring of current CEO Cynt Marshall, a domestic abuse survivor. Marshall said she talked with Kidd during the interview process multiple times and is convinced his hiring doesn't undermine the organization's zero-tolerance policy.

"I very much felt like we were doing the right thing," Marshall said.

Kidd said much of his conversations with Marshall will remain private.

"The first step is you have to get help," Kidd said. "If you don't get help, nothing changes."

As for the basketball, Cuban is eager to get started with his new regime in place.

"I think you're going to see a lot of things that are going to make us far better as a team," he said.