HOUSTON — LeBron James and Russell Westbrook both had triple-doubles and the Los Angeles Lakers snapped a season-high, five-game skid with a 132-123 victory over the Houston Rockets on Tuesday night (Wednesday, Manila time).

Houston stuck around for most of the night, but James took over late to allow the Lakers to pull away and hand the Rockets their fifth consecutive loss.

The Rockets trailed by one when James was called for goaltending on a layup by Jalen Green to put Houston on top with 2 ½ minutes left. But the Lakers challenged the call, and it was overturned. Carmelo Anthony made a 3-pointer a few seconds later to extend the lead to 120-116.

James added two free throws after that and his one-handed dunk after a turnover by Houston made it 124-116 with less than 90 seconds to go.

Kevin Porter Jr.'s 3-pointer got Houston within five before James struck again, making a layup to extend the lead to 126-119 with less than a minute remaining. James made four free throws after that to secure the victory.

Green, the second overall pick in this year's draft, led the Rockets with 24 points after missing 15 of the last 16 games with a strained left hamstring.

The Lakers took the lead by scoring the last five points of the third quarter and opened the fourth with a 6-0 run to make it 103-92 with 11 minutes to go.

Green got Houston going after that, making two 3-pointers during a 10-2 spurt that cut the deficit to 105-102.

The Lakers led by four later in the fourth when Armoni Brooks stole a bad pass from James and dished it to Green, who hit another 3-pointer. David Nwaba added a free throw after a loose ball foul two seconds later to tie it at 111 with 6 ½ minutes remaining.

James put the Lakers back on top with a layup and Westbrook had a shot to extend the lead after a miss by Josh Christopher, but his dunk attempt bounced off the rim and high into the air.

Porter had 22 points and nine assists in his return after missing the last 12 games with a bruised thigh. Christian Wood also scored 22.

Christopher tied it on a layup with less than a minute left in the third quarter. But the Lakers scored the last five points of the quarter, capped by a 3 from Westbrook, to take a 97-92 lead into the fourth quarter. Westbrook pointed at the L.A. bench and smiled broadly as he walked off the court after the shot. 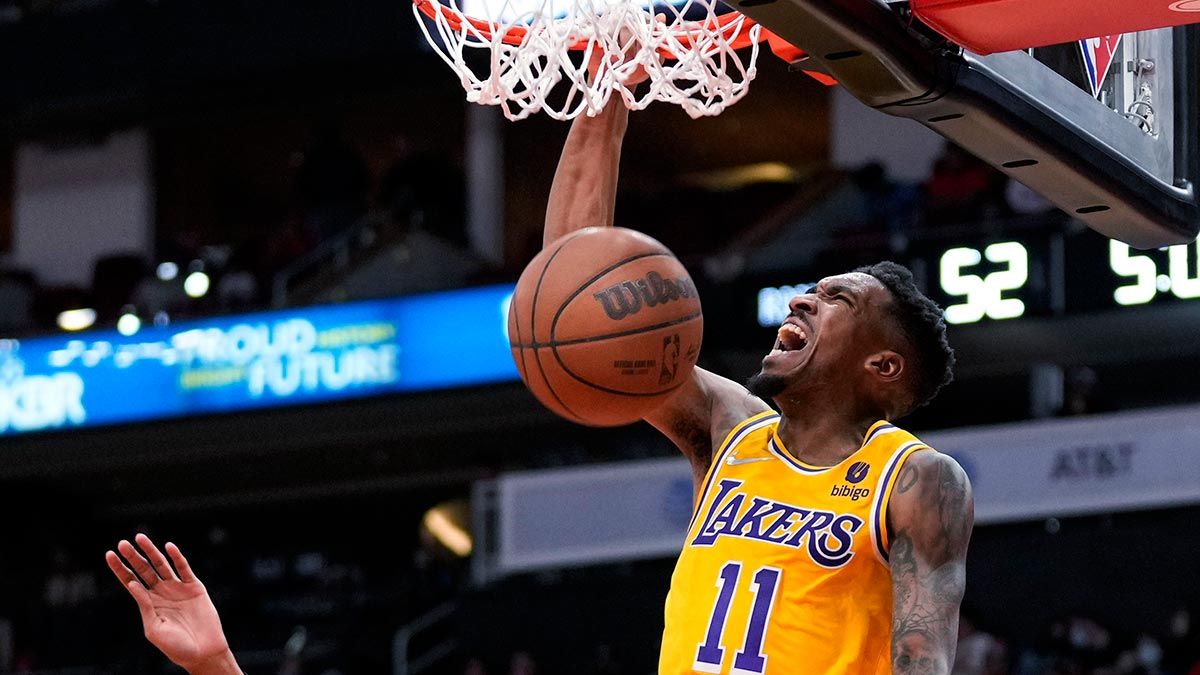 Lakers: Coach Frank Vogel missed his fifth straight game because of COVID-19 protocols. Assistant David Fizdale, who has filled in while Vogel has been out, said that Vogel was getting close to returning but he wasn't sure exactly when he could rejoin the team. ... Trevor Ariza, Kent Bazemore, Austin Reaves and Rajon Rondo missed the game because of health and safety protocols. ... Wayne Ellington missed the game for an illness that the team said was not COVID-19 related.

Rockets: D.J. Augustin, Kenyon Martin Jr., Garrison Mathews and Jae'Sean Tate were out because of health and safety protocols.