SAN FRANCISCO — James Harden had 29 points and 10 assists, leading the Houston Rockets past the cold-shooting Golden State Warriors 135-105 on Thursday night (Friday, Manila time) in the teams' first game back from the All-Star break.

Russell Westbrook had 21 points and 10 assists before being ejected, while P.J. Tucker scored 15 points. He made all five of his 3-pointers as the Rockets knocked down 25 total — a franchise record allowed by the Warriors against any opponent. Houston set an NBA record with 27 3s in a win against the Suns last April.

Robert Covington added 20 points and all five Houston starters scored in double figures as the Rockets ran away with this one early after losing 116-104 at Chase Center on Christmas Day.

Things got testy this time with 6:04 to play when Westbrook tussled with several Warriors. After a replay review, Westbrook received his second technical of the night and was ejected.

Andrew Wiggins scored 22 points in the Warriors' fifth straight loss and also their fifth consecutive at home. Draymond Green dished out seven assists after getting nine in each of his previous two games.

The Rockets, missing guard Eric Gordon for a third straight game with a bruised left leg, raced to a 16-4 lead, shooting 6 of 9 as the Warriors committed three quick turnovers and needed an early timeout. 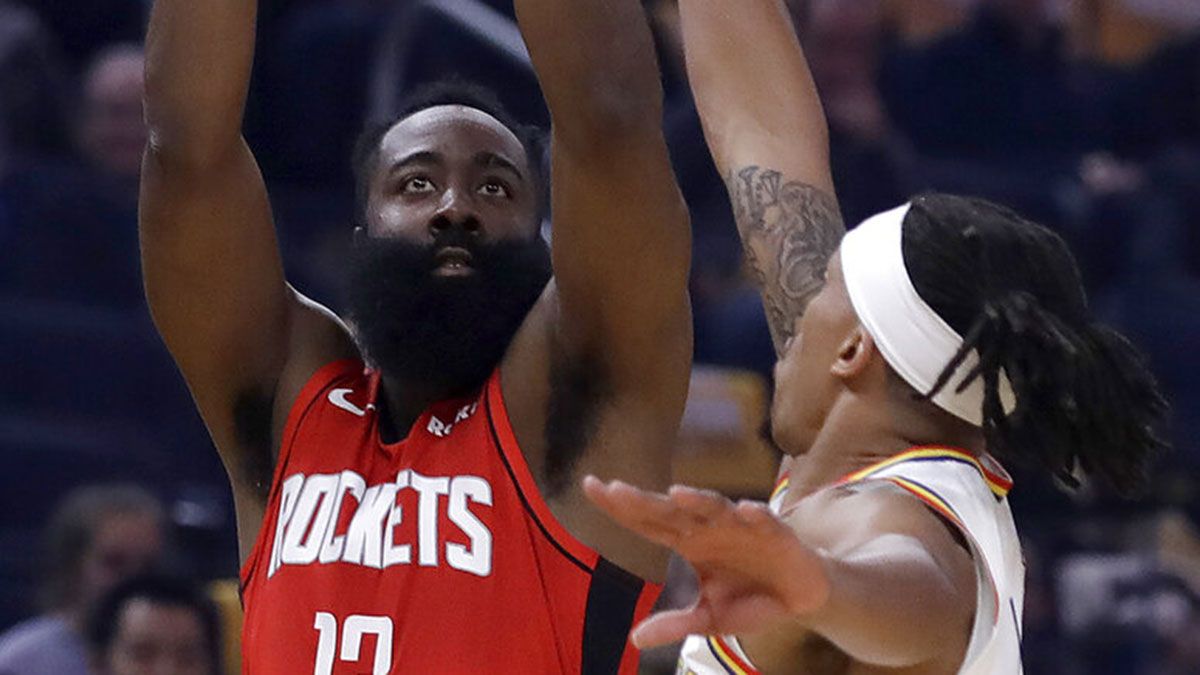 James Harden gets a shot up over Damion Lee.

Golden State started 5 of 16 and missed its initial 11 3-point attempts. When Jordan Poole finally connected from deep with 4:52 left in first half, Houston already had 13 3s.

Klay Thompson will not play the rest of the regular season as has been the plan all along, though the Warriors said it definitively before the game.

Thompson tore the ACL in his left knee last June 13 during the deciding Game 6 of the NBA Finals against Toronto and had surgery July 2. He was re-evaluated over the All-Star break and the team said Stephen Curry's Splash Brother is expected to be ready to go for training camp in late September.

"It's been a very frustrating year for Klay but I think he's almost out of the woods," coach Steve Kerr said. "He's a couple months away from this season ending and him moving toward a summer of preparing for the next season with his teammates, so I think that's a much better place for him to be emotionally."

An update on Curry's recovery and progress from a broken left hand is planned for Feb. 28 and he expects to be back on the court in March.

Rockets: Coach Mike D'Antoni hopes Gordon could be back as soon as Saturday at Utah. ... Houston has won the last two season series against Golden State after losing three straight. ... The Rockets have won seven of the last 10 in the series after losing 11 of 12 from February 2014 to March 2017. ... The Rockets also have won four of five on the road against the Warriors after dropping five of the previous six. ... Houston is 10-10 on the road vs. the Western Conference.

Warriors: Wiggins notched his fourth straight season reaching 100 3s by making one. He has scored in double figures for a career-high 65th straight game, all 46 this year and four with the Warriors since joining Golden State in a trade from Minnesota. ... The Warriors were looking to sign Dragan Bender to a 10-day contract, with Kerr noting, "It's trending that way." ... Rookie Poole scored in double figures for a career-best fifth straight game. ... The Warriors stuck with their same starting lineup coming out of the break. Kerr has used 27 different starting rotations already, tied for the most in his six seasons with the 27 he used in 2017-18. ... Golden State plays at Houston in the teams' final meeting April 2.

D'Antoni chuckled as he explained Houston's small-ball approach when asked about how he used to decide when to go big or small.

"I don't have to worry about that now," D'Antoni said. "I couldn't make that decision so I decided to just give me no choice. You're assuming we have a strategy, we're going to play small. We don't need to go big. Our team is better this way and if we're going to dive in we might as well go all the way in."

Rockets: Visit the Jazz on Saturday having won the last two in Utah and four of five on the road in the series.

Warriors: Host the Pelicans on Sunday to continue a four-game homestand.