NEW YORK — James Harden won't be back for Game Two of the Eastern Conference semifinals. The Milwaukee Bucks believe their shooting touch will.

So the Bucks have plenty of reasons for optimism heading into the game on Monday night (Tuesday, Manila time). Yet there's also still plenty of cause for concern.

Kevin Durant and Kyrie Irving are still out there for the Brooklyn Nets, who spent all season working around injuries and proved another point about themselves after shaking off Harden's loss 43 seconds into Game 1.

"That we have the capability of rising to the occasion," Irving said. "We're a very mature basketball club because we play selfless and we trust each other, so in any situation in a game I feel like we have the talent, we have the preparation, we have the coaching staff to be able to go out and execute."

The Phoenix Suns host the Denver Nuggets in Game 1 of their Western Conference semifinal series in the other game Monday.

The Nets ruled Harden out for Game 2 because of right hamstring tightness. Coach Steve Nash said Harden's recent trouble with the hamstring, which caused him to miss 20 of 21 games late in the season, made his availability for the remainder of the series difficult to gauge.

"For James, we obviously are desperate for him to return and he's a huge piece of what we do on our team, but at this point I think it would be all guesswork to really understand," Nash said. "He's had such a little up-and-down recent history with it that it's really hard to predict, so let's hope for the best."

The opener of the East series between the Nos. 2 and 3 seeds was the first loss of the postseason for the Bucks. After making a franchise-record 14.4 3-pointers per game during the season, they also struggled from the perimeter in Game 1 of the first round against Miami before winning in overtime. But they knew then they could rely on their defense to hang in until the NBA's highest-scoring offense came around.

"But the talent level wasn't the same," Giannis Antetokounmpo said. "Now we're playing against Kyrie, KD, Joe Harris, one of the best shooters in the league, so it's a little bit different.

"It's a little bit more hard, but at the end of the day we love the challenge. We're going to stay together, we're going to play together and hopefully we can give ourselves a chance to win Game 2."

That will be much easier if Khris Middleton and Jrue Holiday shoot better. Middleton was 6 for 23, Holiday 7 for 19, and they combined to go 2 for 12 behind the arc.

The Bucks have significant size advantages up front. They had big margins in points in the paint (72-48) and second-chance points (20-4), with Antetokounmpo and Brook Lopez combining to shoot 24 for 35.

"But when it comes to kind of the guards and myself, I've got to finish better," Holiday said. "There was a couple of them in there that I should have made and I didn't and next game we'll turn that around." 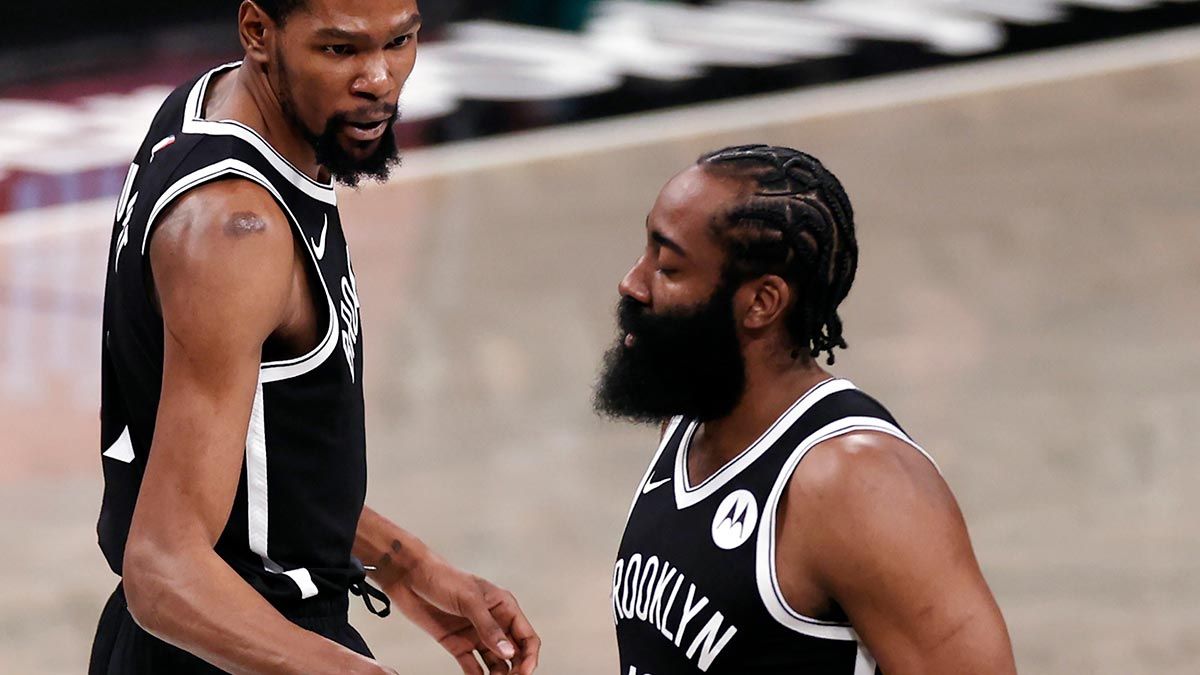 —NEED TO KNOW: After unprecedented stability for this team, the Nets will have to use a new lineup for the first time this postseason. They used a franchise-record 38 different starting lineups during the regular season before going with their Big Three plus Harris and Blake Griffin for all six games. That was the most consecutive starts for any unit this season and made that already the second-most used starting five this season.

After having Durant, Harden and Irving play together only eight times during the season, Nash was hopeful for a good stretch of health.

"I think I was there prior to last night but that's just not our reality," he said, "and so you have to accept it and you have to enjoy the opportunity we have regardless of the adversity we that face."

—KEEP AN EYE ON: Harris and Griffin, who provided significant support for Durant and Irving Game 1. Harris scored 19 points and made five 3-pointers, while Griffin hit four and finished with 18 points and 14 rebounds while playing as Brooklyn's undersized center.

—INJURY WATCH: Nash said Jeff Green would miss his fifth straight game with a plantar fascia strain of his left foot, but believed the forward will play in the series.

—PRESSURE IS ON: Milwaukee's bench. Bucks coach Mike Budenholzer seems committed to trusting his subs, playing Antetokounmpo just 35 minutes while Durant and Irving surpassed 40. But none made anywhere near the impact of Mike James, Bruce Brown or Nicolas Claxton off the Nets' bench. Bryn Forbes was 1 for 5 on 3s after making 49% of them and averaging 15 points in the first round.