SAN FRANCISCO — Now, Ja Morant and the Memphis Grizzlies are calling out the Golden State Warriors for causing unnecessary injury.

Morant re-injured his troublesome right knee late in the game when Jordan Poole grabbed it as they fought for a loose ball late in the Warriors' 142-112 victory that embarrassed the Grizzlies on Saturday night (Sunday, Manila time) and gave Golden State a 2-1 lead in the Western Conference semifinals.

Morant left Chase Center without speaking to reporters but posted and later deleted a video of the play on his Twitter feed with the words "broke the code," a reference Warriors coach Steve Kerr had used five days earlier when Dillon Brooks' hard foul in Game Two sidelined Gary Payton II.

Poole and Andrew Wiggins swarmed Morant as he dribbled at the top of the 3-point arc when Morant struggled to keep possession — and Poole described it as "a basketball play."

"When we doubled him, I hit the ball, l was going for the ball. Obviously, you don't want to see anybody get hurt, I'm not even that type of player," Poole said. "I respect everybody. Obviously hopefully he gets better and we can see him out there next game. "

Brooks was suspended for his Flagrant 2 foul in the first quarter Tuesday night when he pounded the head of a driving Payton, who landed awkwardly and fractured his left elbow. He will be sidelined indefinitely, also with ligament and muscle damage.

Kerr said the play was "dirty" and broke an NBA "code" injuring someone and threatening his career, while Memphis coach Taylor Jenkins and his Grizzlies players defended their hard-nosed style as not dirty at all.

Draymond Green and Golden State kept cool from the opening tip — methodically running away with it. Instead, Memphis forward Kyle Anderson got ejected with 6:19 left for arguing an offensive foul.

A 3 by Morant just before the halftime buzzer got the Grizzlies to 64-57 at the break and gave him 17 of his 34 points after a 47-point performance in Game 2. But Morant couldn't do it alone for Memphis, and he was done after rubbing his tender right knee and limping off with 6:19 to play before heading to the locker room.

"He's getting evaluated now. Nothing further. We just watched the replay," Memphis coach Taylor Jenkins said. "He was going after a dribble and Jordan Poole actually grabbed his knee and yanked it, which kind of triggered whatever happened, so I'm actually going to be very curious to see what happens after that."

Kerr said he "didn't even notice the play."

Brooks will be back for Game 4 on Monday night at Chase Center, where the raucous sellout crowd included two women holding signs of Payton's face insisting the Warriors "Win it for Gary." It's unclear if Morant will be fine to play.

"I've been through a tough knee injury, and I don't think there's any malicious intent from Jordan," Thompson said. "I don't even think he's strong enough to affect somebody's knee. But we're not out there trying to hurt people or trying to club people in the back of the head on a fast break. We play the game the right way and I'm going to have his back."

Golden State dominated with a balanced attack and energy on both ends after Green called for the offense to do more to better the defense. He dished out eight assists, five points and five rebounds.

"The shot selection was much improved," Kerr said. 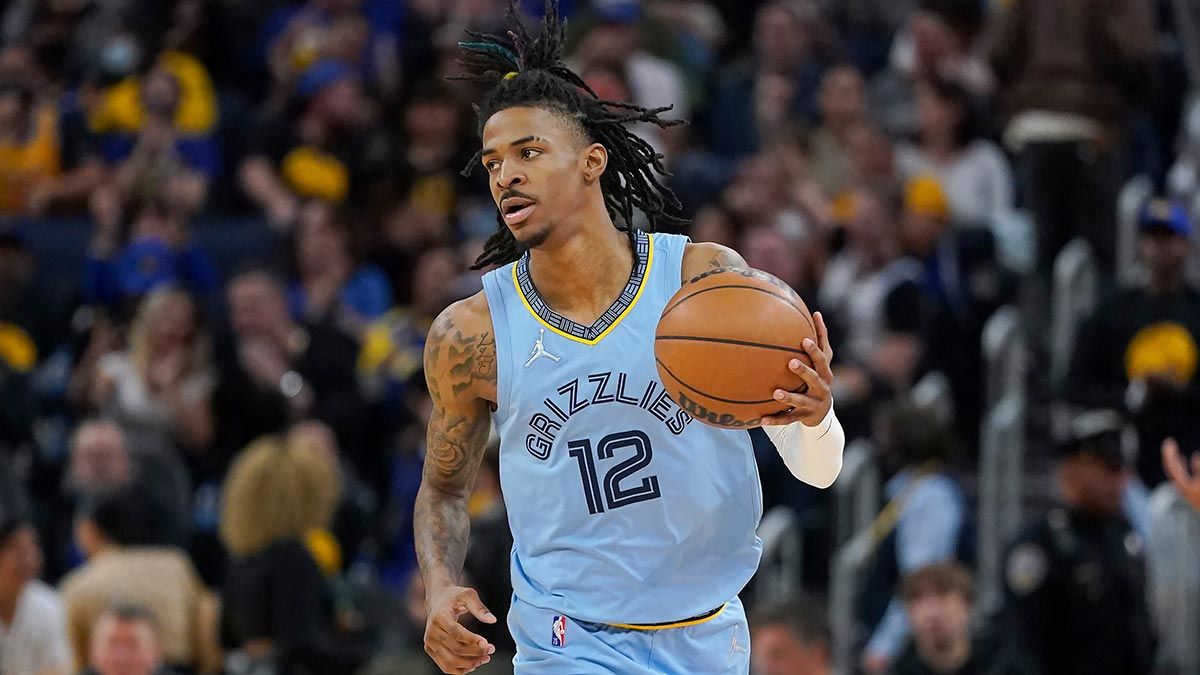 Ja Morant and the Grizzlies fall 1-2 behind in the series.

Poole scored 27 points off the bench and Andrew Wiggins added 17 points for Golden State, which used a 10-0 run out of halftime to take command for good.

"We've got another game on Monday," Poole said when asked what he expects next given the latest back-and-forth between the rivals.

Rookie Jonathan Kuminga provided a spark starting in Payton's place, while Ziare Williams was in for Brooks.

Curry missed his initial two shots then scored his first points of the game by making a big 3 with 0.9 left in the first as the Warriors trailed 28-26.

Morant hit a 31-foot 3-pointer midway through the first and Williams dunked shortly after for a 21-8 lead and Memphis made 6 of 9 shots to start the game. But the Grizzlies went cold and made only 3 of the next 12 and watched the Warriors close the quarter with an 18-7 burst.

"We were just too frenetic to start off the game," Kerr said.

He had been 11 for 38 from the floor, including 5 of 22 on 3-pointers, so far in the series before finding a better groove. Kerr figured it would happen soon enough.

"When we're getting good shots, the chances of Klay getting hot are much greater, and when he gets hot, our team takes on a different look," Kerr said. "We just become much tougher to guard."

Grizzlies center Steven Adams was available to play for the first time this series series after coming out of the league health and safety protocols but the big man didn't play until the game was out of hand.

Grizzlies: G Desmond Bane's troublesome back was sore during Game 2 but has improved. "His back is progressing. I don't think he's at full strength like he was in the regular season but he's the ultimate competitor," Jenkins said. Bane had 16 points in 29 minutes. ... Memphis shot 6 of 11 from 3-point range in the opening quarter.

Warriors: The Warriors outrebounded the Grizzlies 21-14 in the first half and 53-37 overall. ... Golden State is 4-0 playing at home during this postseason and 49-11 dating to the 2015 title run that ended with the franchise's first championship in 40 years.