Ime Udoka picks up a T to show displeasure with things, to no avail

SAN FRANCISCO — Just like in Game One, the Golden State Warriors took command with a big third quarter.

Unlike Game One, they finished the job.

The NBA Finals are now tied, after the Warriors turned a close game into a rout with a third-quarter masterpiece. Stephen Curry scored 29 points, Jordan Poole connected from just inside of midcourt to cap the pivotal period and the Warriors beat the Boston Celtics, 107-88, on Sunday night (Monday, Manila time) in Game Two.

"I thought everybody was more engaged," Warriors coach Steve Kerr said after his team improved to 5-0 after a loss in these playoffs. "It's pretty obvious. Just our level of force and physicality was ramped up quite a bit, and it had to be."

Poole finished with 17 points for the Warriors, who outscored Boston 35-14 in the third quarter to turn a two-point halftime lead into a 23-point edge. And when the Warriors then scored the first six points of the fourth, the Celtics waved the surrender flag and emptied their bench.

"We said we needed to play with desperation," Curry said. "That's what we did."

Golden State also got 12 from Kevon Looney on 6-for-6 shooting, and 11 apiece from Andrew Wiggins and Klay Thompson.

Jayson Tatum scored 21 of his 28 points in the first half for Boston. Jaylen Brown added 17 for the Celtics, but fought through a 5-for-17 shooting night, and Derrick White scored 12.

Just like in Game 1, a huge run decided everything. The Celtics went on a 48-18 run in the second half to decide the opener. The Warriors didn't wait that long in Game 2, going on a 43-14 burst from late in the first half until early in the fourth quarter to turn a tie game into an absolute runaway.

Game 3 is Wednesday in Boston.

Curry had 14 of his points in the third, making three of his five 3-pointers in the quarter. Boston was 4 for 15 in the quarter, got outscored 21-6 on 3s and let the Warriors turn five turnovers into 11 points.

"Steph was breathtaking in that quarter," Kerr said.

The Celtics turned a 15-point third-quarter deficit into a 15-point fourth-quarter lead in Game 1, but that wasn't happening again Sunday. Boston coach Ime Udoka even picked up a technical in an effort to show his displeasure with things, including whistles or lack thereof, to no avail.

"I just let them know how I felt throughout the game in a demonstrative way, on purpose, to get a technical," Udoka said.

Poole provided the exclamation point as the third quarter closed, taking a pass in the final seconds, dribbling over the midcourt stripe, creating a bit of space and letting fly.

Curry greeted him with a smile and a hug, the fans at Chase Center leaped to their feet — if they weren't there already — and the outcome was pretty much decided.

And for the first time, the crowd in the Warriors' new building finally saw the Celtics lose. Boston entered the night 4-0 in the Warriors' 3-year-old home, the only team to have won its first four games in the arena.

But giving up 33 points off 19 turnovers meant that streak had no chance of continuing.

"We have to take better care of the ball," Tatum said. 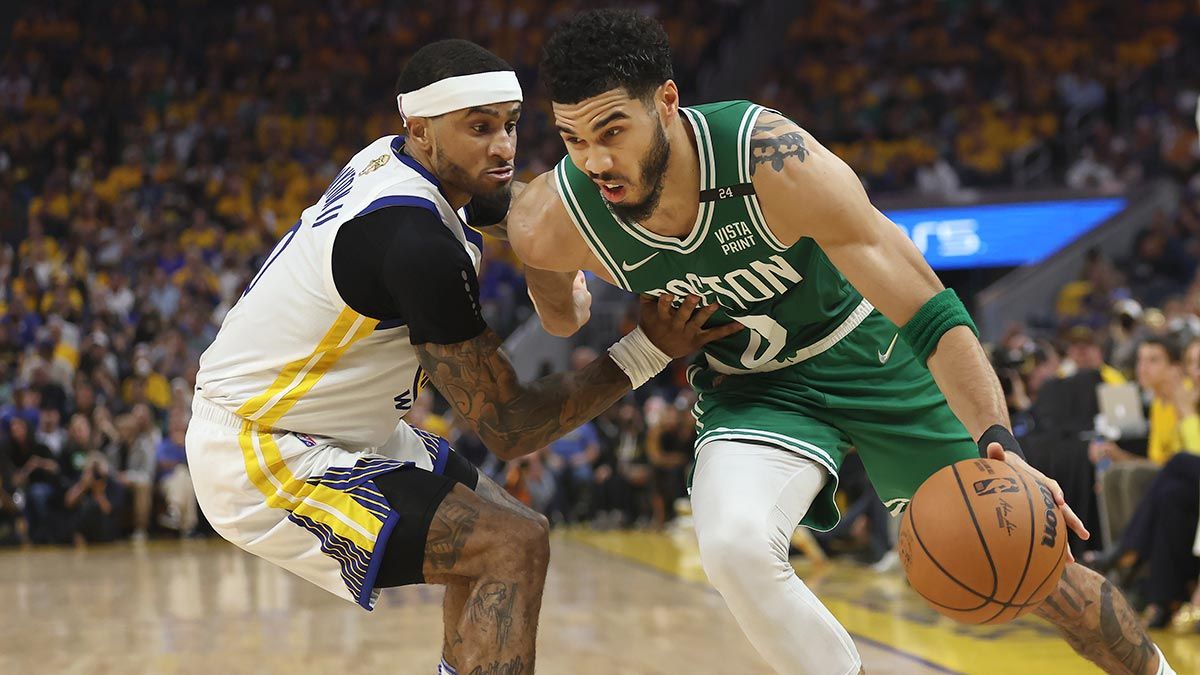 The Celtics were bidding to join only two other teams — the 1993 Chicago Bulls and 1995 Houston Rockets — on the list of clubs that swept two road games to open the finals. Those Bulls and Rockets went on to win the championship, and 31 of the previous 36 teams to open with 2-0 leads ended up celebrating a title.

All is not lost for Boston. The Celtics need to only win their remaining home games to become champions, though that won't be easy against a Warriors team that has won at least one road game in an NBA-record 26 consecutive playoff series.

Celtics: The Celtics fell to 8-3 on the road in these playoffs. They remain tied for the second-most road wins in a single postseason; the record is nine, set by Houston in 1995. ... Robert Williams III, who has dealt with knee issues throughout the playoffs, took a tough fall in the third quarter after getting crashed into by Marcus Smart. He was subbed out 21 seconds later and didn't return. ... Tatum and Brown had 40 of Boston's first 54 points.

Warriors: Draymond Green's impact on Game 2: nine points, seven assists, five rebounds, a technical foul and a whole ton of physicality. "No impact," Horford said. ... Andre Iguodala (right knee inflammation) was out for Game 2, after logging 12 minutes in Game 1. But the knee swelled up Saturday and he sat for the 13th time in the Warriors' last 14 games. ... Gary Payton II played for the first time since fracturing his elbow in the Memphis series.

The Warriors' 35-14 advantage in the third quarter was the 91st different quarter in these playoffs where one team had a double-digit margin over the other. That's the most in a single playoff year ever, topping the 90 such quarters in the 2017 playoffs.

Players and coaches from both teams wore orange T-shirts before the game bearing the words "End Gun Violence" on the front, a topic that Kerr — whose father was killed in an act of gun violence 38 years ago — has spoken out on often. "It comes down to convincing politicians that things like background checks are really crucial, and things that don't impact people's Second Amendment rights," Kerr said.

Sunday marked the 31st anniversary of the first NBA Finals game win for Michael Jordan, when he and the Chicago Bulls rolled past the Los Angeles Lakers in Game 2 in 1991. Jordan made 13 consecutive shots in that game, the last of those the iconic change-hands-in-mid-air layup in the fourth quarter. "A spectacular move by Michael Jordan," was NBC announcer Marv Albert's call.